Splashing in the cool water of one of the 10,000 lakes is an essential part of a true Minnesota summer. However, there are times during the summer months that enjoying this popular pastime isn’t an option due to issues related to the water quality.

Typically, there are two reasons a beach will close:

E. coli is used as a water quality indicator for swimming waters nationwide. At Three Rivers Park District, water quality crews monitor the water at beaches and swim ponds on a weekly basis from Memorial Day to Labor Day to ensure the E. coli levels are safe for users.

The Park District is dependent on beach users to report swimmer's itch incidents since there are no tests for it. To report an occurrence of swimmer's itch, please contact the visitor center at the beach you visited.

What is E. coli and How Does it Get in the Water?

E. coli (Escherichia coli) is a single-celled bacteria with a variety of strains. While most strains are harmless, some can cause intestinal illnesses with flu-like symptoms. When a higher concentration of E. coli is detected, there is a greater likelihood that a dangerous strain is present.

E. coli can enter beach water through a variety of sources, including seagulls and geese, pets and other domestic animals, non-functioning lakeshore septic systems, overflow or breakage in sanitary sewer lines, lawn and street runoff, and from swimmers themselves.

How Do We Test for E. coli? 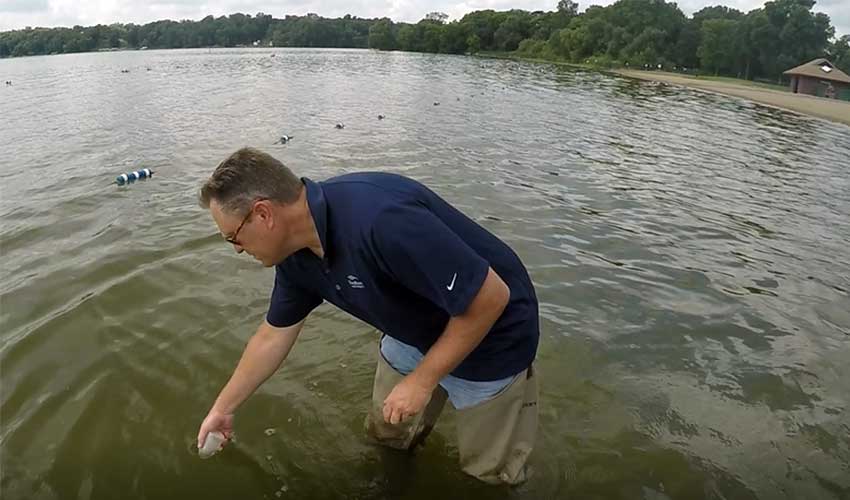 1. A nutrient packet specific for coliform bacteria and E. coli is added to the water sample.

2. The sample is poured into a tray with squares and incubated for 18 hours.

3. The tray is assessed. If the squares have turned yellow, it is considered positive for coliform bacteria. If the yellow squares glow under a fluorescent light (similar to a black light), E. coli is present.

4. The number of squares that turn yellow or glow are used to determine the most probable number (MPN) of bacteria. If the MPN is over 1260 E. coli colonies per 100 ml of sample, or if the 5-day average is over 126 colonies per 100 ml sample, the beach will be closed until levels are within state guidelines.

What is Swimmer's Itch?

Swimmer’s itch (cercarial dermatitis) is skin rash caused by an allergic reaction to a microscopic parasite released in the water by snails.

While a beach is closed due to swimmer’s itch, a treatment of copper sulfate is applied to the swimming area which kills the snails and the parasites. As mentioned earlier, there are no tests for swimmer’s itch and the Park District relies on beach users to report incidents of it.

One way to reduce your chances of contracting swimmer’s itch is to rinse off and/or towel off after exiting the water. Find more information about swimmer’s itch from the Minnesota Department of Natural Resources.

Three Rivers Park District staff take measures to keep bacteria levels low by cleaning up goose droppings, raking the sand on the beach, attempting to keep geese away, and posting signs around the beach warning guests not to feed the ducks, geese, and seagulls.

The swim ponds at Lake Minnetonka Regional Park and Elm Creek Park Reserve are chlorinated to kill any bacteria, similar to a swimming pool, making it highly unlikely that the swim ponds will close due to high E. coli levels.

What You Can Do to Help

There are several things you can do to keep bacteria from entering the water when when at the beach:

Lower Your Risk of Illness from Bacteria

The following steps can help you limit your risk of becoming ill from bacteria:

Amy has been with the Three Rivers Water Resources team since 2014. She graduated with a master's in water quality from the University of Wisconsin–Stevens Point. Prior to moving to Minnesota, she worked for the United States Geological Survey in North Dakota, where she developed a love for hunting birds. She trained her pup for hunting and enjoys getting out with her in the fall. She also enjoys gardening, building things and traveling.