Three Rivers Park District has ten beaches that provide opportunities for swimming during the summer, from Memorial Day through Labor Day. Some of the beaches may occasionally be closed for a variety of reasons. The two most common reasons for beach closure in Three River Park District include high levels of E. Coli and the presence of swimmer's itch. Visit the Swimming activity page to view any closures by park. The Hennepin County website provides a list of all open and closed beaches in the area. 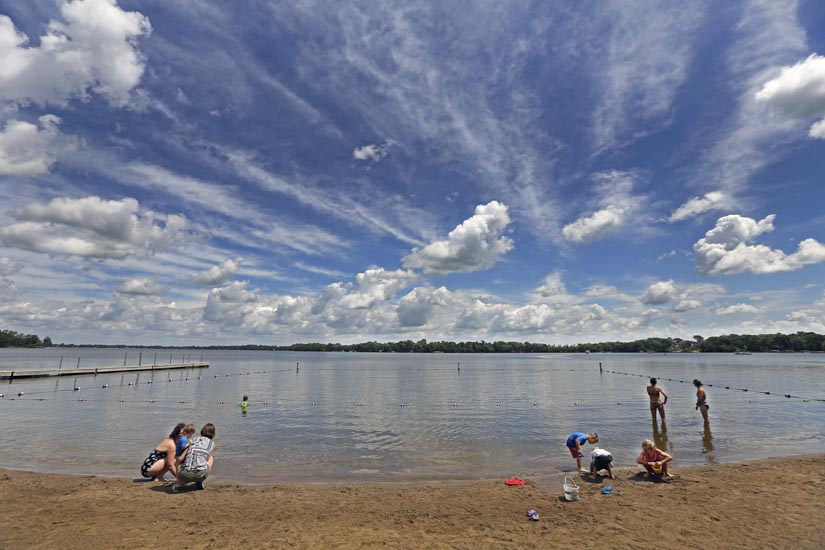 E.Coli (Escherichia coli) is a single-celled bacteria with a variety of strains. While most strains are harmless, some can make us sick. Three Rivers Park District tests for E. Coli at swimming beaches on a weekly basis between Memorial Day and Labor Day.

While water sample tests cannot tell the difference between good or bad strains of E. Coli, the higher the reported number, the greater the risk that a harmful strain is present. Three Rivers will close a beach area if a single sample exceeds 1260 E. Coli colonies per 100 ml sample or if five samples over a 30-day period have a geometric mean over 126 colonies per 100 ml sample.

Beaches will re-open once the water has been sampled and levels are back to within the state guidelines. You can reduce the chances of getting sick from E. Coli while swimming at beaches by:

Swimmer’s itch is a skin rash caused by an allergic reaction to a microscopic parasite released in the water by snails. While a beach is closed due to swimmer’s itch, a treatment of copper sulfate is applied to the swimming area which kills the snails and the parasites. Once the area is safe, the beach is re-opened to the public.

One way to reduce your chances of contracting swimmer’s itch is to rinse off and/or vigorously towel off after exiting the water. To report an occurrence of swimmer’s itch at one of the Three Rivers Park District beaches, please call the visitor center at the beach location you visited.

The Minnesota Department of Natural Resources has more information on swimmer's itch.

At Three Rivers Park District, water quality crews monitor the water at beaches and swim ponds on a weekly basis from Memorial Day to Labor Day to ensure the E. coli levels are safe for users. Learn more about the testing process and how you can help maintain healthy water quality in the parks.