If you are looking for a native shrub or small tree with a wide variety of human and wildlife benefits, then have I got a plant for you! American hazelnut has been utilized by humans for centuries for its tasty — and prolific— nut production. But wait, there’s more!

Add to this the fact that it is easy to establish, thrives without much care, has few insect or disease pests, begins producing seed almost immediately, and is cold-hardy to zone 4 (southern tier of Canada), and you have a plant that is suitable for most locations in Minnesota.

Because it grows well in many conditions, you can expect to find American Hazel within just about any type of forest cover we have (and even some non-forest covers, as well). Within Three Rivers it is not overly abundant, but it is present in just about every habitat in the park district. According to the Society of American Foresters, American hazelnut is associated with 39 types of forest cover.

If you live east of the Rocky Mountains, there is a good chance you will encountered this shrub. In fact, under certain conditions it has even become a problem for land managers.

People in the timber production business often complain about American hazelnut interfering with desirable tree re-establishment on timber harvest sites (especially red pine, though we have never experienced that problem at Three Rivers.

There may be something to this, however, because hazelnut is one of the only woody species recommended for use on all types of surface mine reclamation site conditions. Those are pretty tough conditions, indeed.

American hazelnut (or hazel, for short) is one of two commonly used names for this plant — the other is American Filbert. Cobnut is also occasionally used in certain parts of England.

As is often the case, the common names were given to the plant by early Europeans. Filbert is derived from French and Hazelnut from English.

In the case of Filbert, it is likely that this name originated from St. Philibert of France. Turns out, the first day of nut harvest often coincided with this saint’s feast day — August 20th — in Europe. The spelling was then altered by English growers.

As for Hazel, this one comes from the Anglo-Saxon word “haesel,” which was a type of headwear in fashion back in the day and probably referred to or resembled the outer husk of the nut.

As far as the genus goes, Corylus comes from the Greek word Korus, which is the word for helmet. Likely this is referring to the hard shell of the nut itself.

All of these common names date back to about 600-700 a.d. This tells you just how long this plant has been used by humans. In fact, there is even some fossil evidence from China of people using hazelnut plants that dates back 5,000 years.

How to Identify American Hazelnut

Except for the nuts themselves, this plant is fairly non-descript. It has simple leaves (a single leaf blade) with an alternate pattern. The leaf shape is broad and largely oval, or even slightly heart-shaped. Leaves are slightly longer that they are wide. The edges are doubly serrate (several smaller teeth between a larger tooth) and can be somewhat wavy. The bark is a plain grayish-brown color. 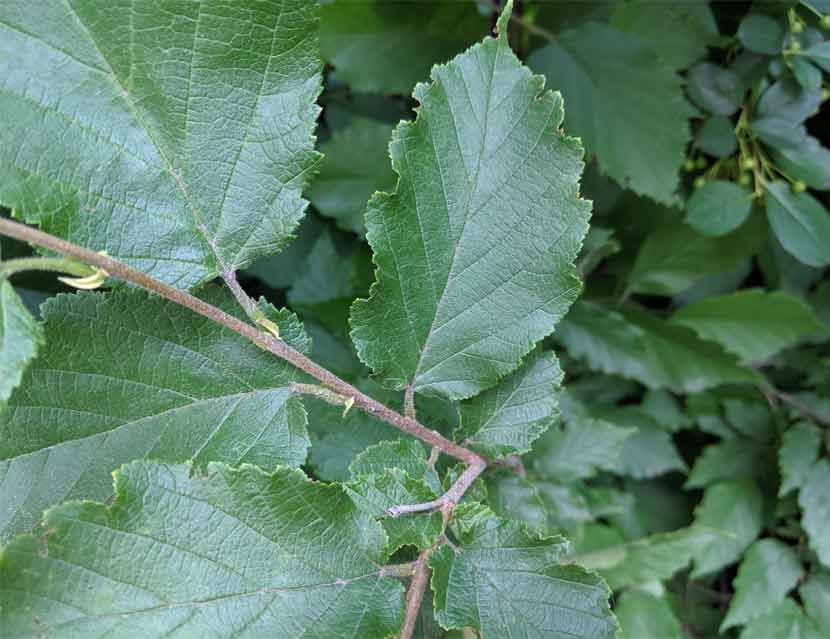 The fruit or seed of American hazelnut is called, well, a nut. They develop from the female flowers and come in clusters of up to five nuts. They usually ripen in early to mid-August, and squirrels absolutely love them.

The male flower is called a catkin and is generally visible in April or May.

The female flower is an inconspicuous thing that also blooms in the spring, but looks an awful lot like a bud on the stem of the plant, except with a bit of red tinge to the tip.

If you are interested in growing your own hazelnut tree, here’s how you do it from our own plant propagator, Lois Larson:

Collect husks in August when both the husk and seed are golden brown. Place them in a cool area out of the sun — a garage or basement will do nicely.

Remove the husks and examine the nutlets. Discard seeds that have blemishes or holes. They may be temporarily stored at 45-55 degrees. Keep the seeds from drying out.

Hazelnut seeds are best sown in fall. Plant the seeds about 1-1 ½ inches deep. A screen or hardware cloth cover may be set and pinned above the seeds to keep squirrels and chipmunks away. Remove the cover in spring. Germination begins end of May.

In addition to its significant value to humans, hazelnut plants play an important role in their natural setting. Deer and beavers browse this plant, but this doesn’t seem to bother it too much. Squirrels and chipmunks absolutely love the nuts, so if you grow one in your yard and hope to harvest the nuts, you will likely have to net each plant to keep the critters out. The nuts are also consumed by a wide variety of other wildlife, from turkeys and quails to foxes and raccoons.

This shrub is an excellent early successional species that we use in our plantings here at Three Rivers to help us “capture” a reforestation site. This means getting a desirable species established that will effectively compete with undesirable (invasive) species.

If you plan on using this plant in a landscape be aware that it can spread rhizomatously (by its roots). Make sure to give it enough room to spread; in general, it will need 15-20 feet of space.

Other than these minor issues, there are few things that bother this plant. If your plant gets out of control, a high amount of shade should suppress it. Digging up the plant by the roots may be possible, but challenging due to its fibrous root system. Herbicide applied directly to cut stems in the late summer is a good way to kill it.

As mentioned previously, hazelnuts have been consumed by humans for hundreds, if not thousands, of years. Historic uses include basically everything we do with them today. They are edible raw or roasted and have a higher nutritional value than most other forest nuts.

That said, while American hazelnuts are edible, the majority of the hazelnuts we consume are from the European species Corylus avellana. Ninety-nine percent of the hazelnuts consumed in the United States are grown in Oregon, with the remaining coming from Washington State. All of these are the European variety.

There is, however, a movement underway to develop a hybrid of the native and European species to increase the range of hazelnut production in the U.S. The main limiting factor for expanding the range of the European hazelnut production in the U.S. is its susceptibility to a fungal blight that our native variety is resistant to. Worldwide, Turkey is the leading producer of hazelnuts, followed by Italy, Spain, the U.S. and Greece.

American hazelnut in Minnesota will likely not be significantly impacted by a changing climate because it grows so well in many different conditions. This means we will probably not see a reduction in the importance of this shrub in our area over the next 50–100 years. Good news for some, but not others.

Archive image: "Haselnuss" by stanzebla is licensed under CC BY-SA 2.0.