Welcome to the more-than-you-need-to-know-but-still-worth-it series of species spotlights! In these regular installments, you will learn about plants, animals and other critters you may encounter in Three Rivers Park District. We hope to provide useful information about their origin, use, how they fit in (or don’t) at Three Rivers, and other fun facts. It is meant to be informative, though not exhaustive, so if you have additional information or insights please let us know!

Let’s start with one of the most common native trees found in our neck of the woods (pun intended): northern red oak.

There are two major native forest types within the Park District: Maple-Basswood and Oak-Aspen-Hickory. Northern red oak is a major component of both, which is not something that can be said of most other trees.

Because of this, the Park District nursery grows between 12,000 and 15,000 seedlings and 600–800 large bare-root individuals per year. You can find good examples of this tree in every park we manage.

What's In A Name?

Depending on where you live, northern red oak goes by several common names, including gray oak, eastern red oak, and mountain oak. However, the botanical name is Quercus rubra.

The word Quercus likely comes from a Celtic word which meant “beautiful tree.” The “red” in the name is likely due to the red fall color of the leaves, as well as reddish petioles (what connects leaves to twigs) and reddish color of the interior wood.

There are several variants within this species, but the differences are small and it would take an advanced degree in botany to tease them apart.

There are two main sub-groups of oak trees in the world: red and white. The main distinction between these groups is a single-leaf characteristic. Specifically, the red oak group has pointed lobes with tiny bristles at the tip of each lobe. White oak trees have more rounded lobes without bristles.

Northern red oak is, obviously, in the red oak group. Minnesota has only three oak species in this group: northern red, northern pin, and black (found only in the extreme southeastern part of the state).

Species within groups can crossbreed with one another, making them difficult to identify. These hybrids can have interesting combinations of leaf shape, bark, and acorn sizes that don’t fit neatly with one particular species.

Bark can also be helpful in identifying this tree. Northern red oak usually has smooth-ish gray bark when young, but develops long, flat-topped furrows when older. I like to call this older version “ski trail” bark, and it becomes more evident as the tree ages. 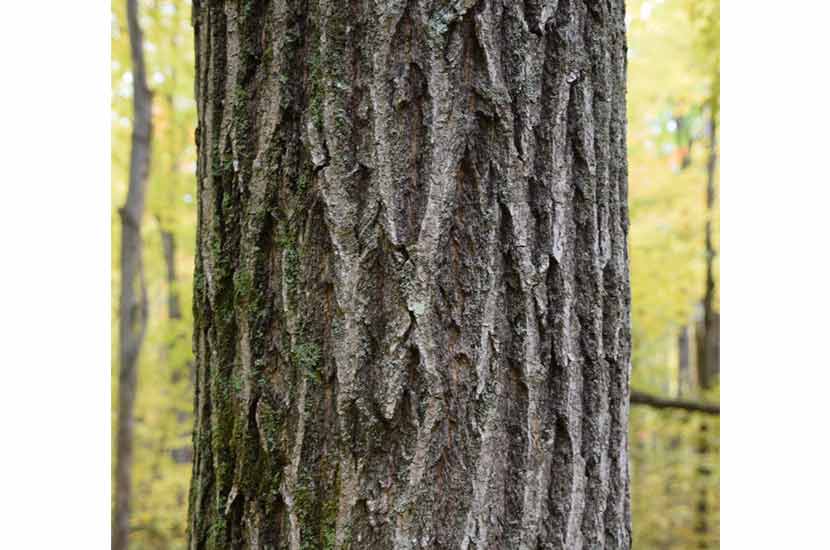 As with all oaks, northern red oaks produce acorns as their main mode of reproduction, though it takes about 20–25 years before this tree begins to produce acorns.

While acorns can be helpful in distinguishing between species, their shape and size can vary, and it is hard to generalize.

For the most part, though, northern red oak acorns will have caps (or cups) that cover no more than the top quarter of an acorn. They generally look like a beret sitting on the top.

While northern red oak can tolerate a pretty wide range of conditions, it is fairly shade intolerant. In general, it needs at least six hours of direct sunlight a day to survive.

Of all of the oak species in our area, northern red is the least fire tolerant (only white oak is close to comparable). Fire tolerance does improve with age and thickness of bark, though.

It grows fairly rapidly (roughly 24 inches a year on decent sites), and as with many other oaks, it is a great stump-sprouter when young. These adaptations allow it to survive even if its top is killed by fire.

From our own plant propagator, Lois Larson:

“In mid- to late-August look for red oak trees with acorns. Watch as they ripen and begin to fall.

Strive to collect seed that are without blemish and have no cap. On inspection, reject seed with any dark specks, a dark cap scar or holes. The seed should fall to the bottom of a container of water.

Plant in soil about one or two inches deep. Cover with hardware cloth or screen if rodents are an issue. Remove the cover in spring. Normal rains will promote germination in May.”

Easy peasy. Am I right?

In general, northern red oak is less disease- and rot-resistant than white oak due to its porous cell structure and lack of tyloses (structures within tree cells that help stop the spread of disease). Because of this, northern red oak is much more susceptible to oak wilt disease (a fungal infection that is deadly to red oak group trees).

One way we do this is by using a vibratory plow to cut root grafts (roots from separate trees that have joined together) because the fungus can spread through these root systems. It is very time consuming, but we would not have the oak forests we currently have without this program.

Oak trees have been used and revered by humans for thousands of years. Northern red oak has been — and still is — used for a variety of purposes commercially: everything from railroad ties and fence posts to cabinets and flooring. To this day, it remains an extremely important species for timber and lumber production throughout North America.

A variety of wildlife use northern red oak for food, including blue jays, wild turkeys, squirrels and other small rodents (duh!), whitetail deer, raccoons, and even black bears.

Predictions for a Changing Climate

Since northern red oak has adapted to a fairly wide range of soil moisture conditions, it is unlikely that it will disappear completely from this region, even under high carbon dioxide concentrations.

The overall importance of this tree to our region may diminish slightly with time as the tree’s range naturally moves north. In anticipation of this, the Park District nursery will source a portion of the red oak seed we collect each year from more southerly sources. This helps ensure the trees we plant are better adapted to predicted future conditions.

Can You Spot A Northern Red Oak?

Now that you know all about northern red oak trees, see if you can spot one. Next time you're outside, take a moment to look up at the trees. Remember the pointed lobes, ski trail bark and beret-shaped acorn caps. If you find one, point it out to a friend and share your new knowledge.

American hazelnuts are easy to grow, cold-hardy, and offer many benefits to both humans and wildlife. Read on to learn all about this plant that grows throughout Minnesota.

Why Do Some Trees Keep Their Leaves Through Winter?

Now that fall is long past, why are some trees still hanging onto their leaves? Learn what's happening in these trees and why it may be beneficial to them.