Known for its leaves that tremble in the wind, quaking aspens are the most widely distributed tree species in North America. You can find them in any part of Minnesota, but they are more common the farther north you go.

Quaking aspen’s scientific name is Populus tremuloides. The name tremuloides is derived from the Latin word tremulus, which, of course, means “to tremble.”

This name refers to the way in which the leaves flutter in the wind. This movement is created by the shape of the tree’s petioles (the stems that connects the leaves to the branches). Quaking aspen petioles are flat and perpendicular to the plane of the leaf. Almost all other trees have circular petioles.

How To Identify Quaking Aspens

An easy place to start with identification is the bark. Young trees often have a creamy white (or even light greenish) bark that is fairly smooth. Because of this, it is often confused with paper birch. Unlike paper birch, however, aspen bark does not peel away from the trunk.

As aspens age, their bark becomes furrowed and dark gray or even black, especially toward the base.

Quaking aspen leaves tend to be almost circular. Again, the flattened petiole is a dead giveaway. If it is difficult to roll the petiole between your thumb and finger, it is probably an aspen leaf.

Big-toothed aspens, also native to our region, are also very similar to quaking aspens, but with larger teeth along leaf margins.

Early To Bed, Early To Rise

Quaking aspens are one of the first native trees to change color in the fall. They are also one of the first to grow their leaves in the spring. They are fast-growing trees and, as such, not terribly long-lived – typically living less than 100 years.

Quaking aspens almost always grow in stands, or groups. They can grow among other tree species, as in in oak-aspen-hickory forests, or in nearly pure stands all by themselves.

Aspen trees can be clonal, which means that they can reproduce by sending up new sprouts (new trees) from their root systems.

Each new sprout is genetically identical to the original tree. If you see a large stand of aspens, it is likely a single organism connected by its roots!

There is one clonal stand of quaking aspen in Utah (named Pando) that is about 100 acres in size. It consists of roughly 47,000 trees, all of which are genetically identical. This stand is believed to be the largest living organism in the world.

From our own plant propagator, Lois Larson:

In April, before aspen trees grow their leaves, watch for catkins – dangling flower clusters – to emerge. Aspen are dioecious, meaning each tree will develop either all male flowers or all female flowers. 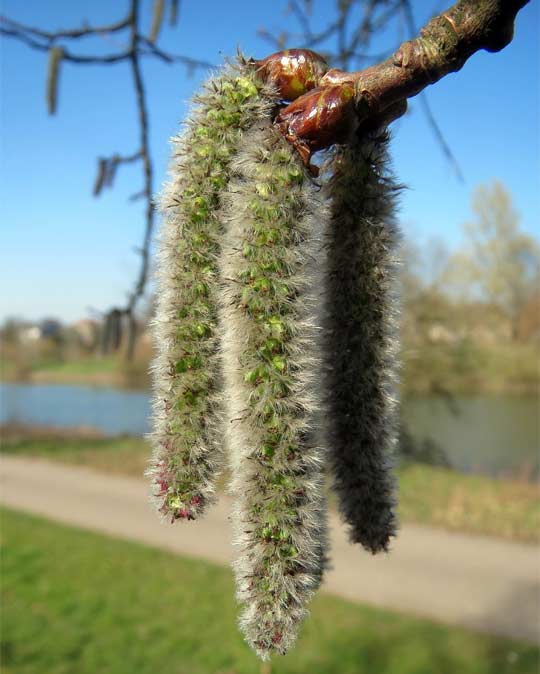 The male flowers will bloom first. After the flowers develop, they release their pollen and fall to the ground.

Trees with female flowers will be pollinated and continue to develop.

Small capsules along female flowers contain seeds that are embedded in a cotton-like down. As the flower ripens, it grows longer and the capsules expand. Collect catkins just as the capsules begin to crack and the cotton is emerging with the seeds.

Lay the seeds in thin layers in a very warm area that has little to no wind or air movement. The next day, carefully pluck the cotton from the catkins. Place the cotton containing the seed loosely in paper bags. 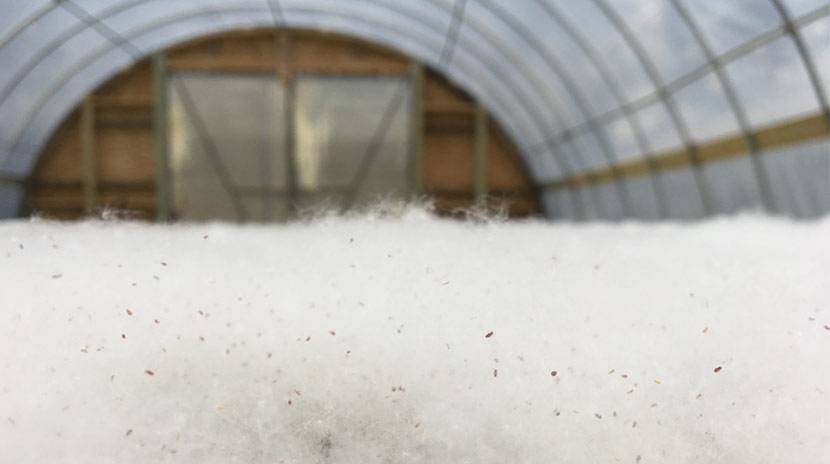 Within seven to 10 days of collection, cast the cottony seed in thin layers on a prepared seedbed or flat. Carefully burn cotton off with a handheld propane torch, then water the seeds routinely.

Keep your seedbed or flat lightly moist while germination is occurring. Seedlings should not be allowed to become too dry between watering.

As mentioned previously, quaking aspens reproduce from root sprouts and form clonal stands. Simply cutting down an aspen tree will result in numerous root sprouts off of the cut tree’s root system.

Three Rivers uses quaking aspens in all of its reforestation processes as a way to help “capture” a site. This means we plant it because it can out-compete other unwanted trees and shrubs. Because of its potential to become aggressive, however, aspen typically make up only 3-5 percent of our total plant mix.

As with all of the other native species we grow, manually collecting seeds from the trees is the main method of reproduction. This creates more genetic diversity, but can be a difficult process. 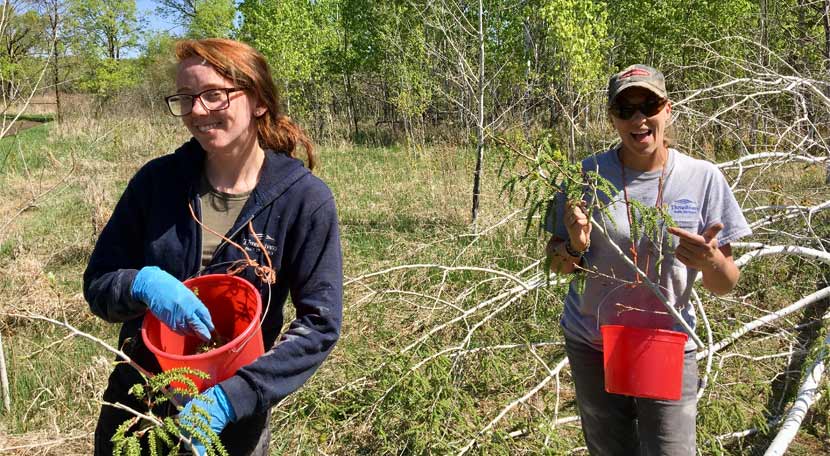 Aspen have long been used medicinally by Native American cultures to treat a number of ailments. In particular, it was used as an anti-inflammatory and antiseptic. It should be no surprise then that the bark of this tree contains salicylates (think aspirin).

In Minnesota, aspen is the leader in overall standing forest volume – the amount of wood that can be purchased or sold – and it is not even close. In Minnesota alone, there are roughly 6.3 million acres of aspen forest. Its nearest competitor, white cedar, has a volume of about 40 percent that of aspen.

The main commercial use of quaking aspens is the production of pulp and fiber. They are also used in plywood construction and lower-grade saw timber.

Predictions for a Changing Climate

Changing weather patterns could have significant effects on the distribution and importance of quaking aspens. It is anticipated that our region will have less rain and more drought conditions in the future. This trend will likely result in slightly lower aspen reproduction.

It is anticipated that the core growing area for aspen will shift significantly north and entirely out of Minnesota by the year 2100.

Can You Spot A Quaking Aspen?

Hopefully by now you can tell that quaking aspens are a significant tree in Minnesota and the Twin Cities region. Their ability to send up clones of themselves from a single root system makes them remarkably resilient plants.

Next time you’re out for a stroll in the parks, take a careful look around and see if you can spot a quaking aspen – or even a stand of them. Notice if the bark is smooth and white or light-greenish, or furrowed and dark at the base. Can you tell if it’s young or old? Make sure you stick around long enough to see the leaves quake in the wind.