This is a guiding concept in my work as an interpretive naturalist, and it rings true as I learn and teach about spiders.

I began learning about spiders as I studied their relationship with the prairie plants at the Upper Midwest Environmental Science Center in French Island, Wisconsin.

How very strange it was for me to seek these creatures on purpose when I used to keep my distance whenever possible. But the more I learned about spiders, the more it became clear just how important spiders are to humans.

So I set my hesitation aside and did my best to observe, collect, photograph, and identify spiders in the pursuit of knowledge, curiosity, and a greater understanding.

Why Are Spiders Important?

Spiders are an important part of their ecosystems, especially in their role as insect eaters. It is estimated that spiders eat between 400 and 800 million tons of insects each year (Nyffeler and Birkhofer, 2017).

Spiders eat flies and mosquitoes, which can spread disease. They also consume aphids and beetles, which are responsible for destroying crops.

Though spiders are most often thought of as predators, they are prey as well. Spiders are an important food source for birds, frogs, salamanders, and small rodents. There are even some animals, such as parasitic wasp larva, that eat spiders exclusively.

In addition to their roles as predator and prey, spiders are important for the silk they produce. Spider silk is known for its elasticity and strength, and humans have used spider silk as crosshairs, bandages, fishing nets, and cloth.

Spiders are also important for their research potential. Numbering over 40,000 known species of spiders worldwide, spiders live on every continent except Antarctica. They vary in size, color, body shape, hunting methods, and courtship behaviors.

For example, the male peacock spider is well-known for its bright colors, elaborate movements, and the distinct vibrations it produces during courtship. Overall, not much is known about spiders and their behaviors in comparison to what is known about the more frequently studied mammals and birds of the world.

As you hike the parks, the spiders you’re most likely to encounter are fishing spiders, orb weavers, crab spiders, wolf spiders, and jumping spiders. This is based on what I've seen in my years of teaching in the parks and on the observations submitted to iNaturalist in the “Bugs of Three Rivers Parks” project.

Spiders are grouped into families based on their shared characteristics. Fishing spiders and nursery web spiders are often mistaken for wolf spiders. Both spiders splay their legs wide as they skid across the surface of the water. They are large, fuzzy, and fast.

Nursery web spiders are named for the diligent care they take of their egg sacs. They can be found in the woods, near water, and in your garage.

Orb weavers can be found in any location that provides a structure on which a web can be built, including vines, grasses, and branches. Some orb weavers stay in the center of their web, and some wait in a hidden spot near the web called a retreat. They tend to have small eyes and bulbous abdomens.

Crab spiders are often found on flowers or on the ground. When they aren’t sitting and waiting for prey to cross their path, they scuttle sideways to move. Their front two pairs of legs are distinctly larger than their back two pairs of legs. Crab spider coloration varies greatly from individual to individual.

Wolf spiders are active hunters. They are similar in appearance to fishing spiders, but they are a bit smaller and keep their legs closer to their body when resting. Wolf spiders are known for being good parents. It is not unusual to see these spiders with a large egg sac or with their tiny babies riding on their back.

Jumping spiders are active hunters. They can be found in tall grasses and open areas. Jumping spiders move by – you guessed it – jumping. Jumping spiders vary in color and pattern, but they tend to have large, prominent eyes and small, fuzzy bodies. This cute combination is why my favorite professor, Dr. Devinney, refers to them as teddy bears.

If you’re able to get close enough, you can also figure out which spider is which by looking at their eye arrangement. Check out this great guide of spider arrangements with graphics by Lynette Schimming.

Spider Silk and Its Many Uses

When it comes to building webs, some spiders make iconic, flat “orb” webs like in the children’s story Charlotte’s Web. Some make messy cobwebs like the ones you find in the corners of rooms.

Others create webs shaped like a funnel, and still others construct something completely different from all of these. If you see a web, its builder is likely hiding somewhere nearby.

Spiders that hunt for food without a distinct web tend to be fast and have larger eyes than their weaving counterparts. These spiders hunt by ambushing or stalking their prey. Spitting spiders have a unique hunting method where they throw silk to catch their food.

Spiders can also use their silk to move through the air in a process called ballooning. And in a recent study by the University of Bristol, it was determined that spiders are able to sense and use atmospheric electric fields as they use silk to balloon. Scientists continue to be inspired by the unique properties and applications of silk.

For some, spiders elicit wariness, revulsion, or even terror. Sources from scientific journals to internet polls confirm that spiders are one of the most feared animals around.

The majority of the fears associated with spiders here in Minnesota are exaggerated, unfounded, or completely false:

Though we tend to call every little red bump, bite, or rash a '”spider bite,” blame can usually be assigned to flies, fleas, mites, lice, ticks, or skin infections. Even in places where these spiders are typically found, bites are rare. In the spider-enthusiast world, it is said that you have to work hard for a spider to bite you.

After over a decade of handling, poking, and prodding spiders, I have yet to get bitten. Even if I were to get bitten, I feel fairly secure knowing that venom is not intended for me and is highly unlikely to cause a reaction of any kind.

There is one more common myth that I’d like to dispel once and for all.

Have you heard that daddy long legs have the most dangerous venom, but their fangs are too small to puncture the skin?

First of all, the animal that is known as “daddy long legs” is an arachnid, but not a spider. They are commonly known as harvestmen.

Harvestmen have one main body part where spiders have two, and they lack the spinnerets needed for silk production. Secondly, they don’t have fangs or venom. Harvestmen are not venomous, and they are not spiders. The more you know!

Ways To Learn More About Spiders

If you’re ready to gain an even greater understanding of spiders, here are a few ways you can learn more: 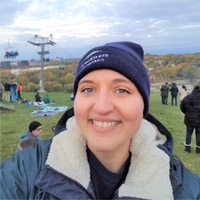 Monica Rauchwarter spent time learning and teaching at Dodge Nature Center, Warner Nature Center, and Lowry Nature Center before joining the Richardson Nature Center community as an interpretive naturalist. Her background is in ecology and interpersonal communication. When she's not at the parks, Monica enjoys reading, cooking, and entering spider sightings into the iNaturalist project “Spiders of Minnesota."