As the days warm and the earthy, damp smell of spring fills our noses, we start to hear the call of frogs. These small creatures have survived the long cold winter and now they have one goal: laying eggs.

How Long Are Frogs' Tongues?

The first misconception is about the length of their tongues. Art, cartoons, and games all show a tongue that stretches out for feet at a time. I remember in IT class in elementary playing a game on the computer where you have to guide a frog’s tongue all the way through a maze to catch a fly. The reality is that frogs do have long tongues, at least relatively.

In addition, the frog tongue is attached to the front of the frog’s mouth, allowing it to launch almost the entire tongue out of its mouth.

It launches incredibly fast. A frog can shoot out its tongue, capture an insect, and pull it back into its mouth within .07 seconds — five times faster than the human eye can blink.

Insects caught by the tongue can experience 12 Gs or 12 times the force of gravity — typically astronauts experience 3 Gs during a rocket launch.

Are They Really That Sticky?

The second misconception is how sticky their tongue is. Generally we think of a frog tongue as being sticky all the time, but that is not the case. If a frog’s tongue was always sticky, it would stick its mouth together. Instead, a frog’s tongue produces mucus right before the tongue impacts the insect.

This mucus is amazing. When the tongue first hits the insect, the tongue envelopes the insect and the mucus-y saliva penetrates any gaps or cracks in the insect’s exoskeleton.

During the high speed of the tongue retraction, the mucus becomes five times stickier than honey, helping to pull the insect into the frog’s mouth.

Once in the mouth, a frog’s eyes push into its mouth. The slow speed causes the mucus to lose its adhesive properties, allowing the insect to be pushed by the eyes into the frog’s stomach.

These two adaptations allow frogs to be highly efficient predators of insects, worms, pill bugs, and just about anything else that moves and can fit in a frog’s mouth. This helps them survive until next spring when they can lay eggs again, and continue their life cycle.

These are just a few of the cool things about frogs. If you want to learn more about them, including how some can survive becoming frogcicles in the winter and how frogs can help us stay healthy, tune into the Three River’s podcast, The Wandering Naturalist.

This podcast explores the cultural history and the nature in the area that helped to shape our parks. April’s episodes focus in on what makes frogs special. You can download episodes from the web or follow on Google Play, iTunes, Spotify and Stitcher. 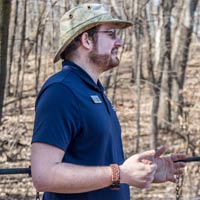