Banner photo by toan phan on Unsplash. Archive image by Terry Priest via flickr under the CC BY-SA license.

When the sun goes down and the shadows thicken, the coming darkness begins to change habitats everywhere. Even a trail you frequent on a regular basis is suddenly transformed as different animals roam about after a long nap during the day. Many creatures depend on the darkness that takes over while we sleep. They depend on it to find food, to be hidden in the shadows for survival, and to find a mate.

One of these creatures that thrive in the night are fireflies – and now through July is your best chance at seeing them in Minnesota.

Many of us remember the magic of being out late at night catching these bugs that light up the darkness. You may recall gazing at their pulsing light through a glass jar or watching them blink inside your hands before letting them fly away.

Fireflies evoke a sense of wonder and delight. Finding yourself surrounded by their flashing lights makes you feel like time stands still and that all is right in the world.

Where I grew up, fireflies didn’t exist; we had glowworms instead, a slightly different species that rely on steady bioluminescent light to find a mate. When I first experienced the flashing of fireflies, I felt like I was in a different world.

This began my deep interest in these little creatures, and I came across research that astounded me!

Fireflies are actually beetles, not flies. The parts of their bodies that make them a beetle are:

What Makes Fireflies Light Up?

Do they have a light switch that turns their lantern on and off? It’s a little more complicated than that.

The firefly glow that is happening in their lantern is a lot like baking a cake: You need ingredients to produce a final product. The same goes for firefly flashes. Different chemical reactions are needed to produce a flash.

Take an enzyme called Luciferase, combine it with a substrate called Luciferin; mix it with magnesium ions and ATP (energy), add a little oxygen, and all that combined makes the firefly glow.

The amazing thing about fireflies is that each species has its own pattern of flashes – like their own fancy Morse code – that allows them to communicate their desire for a mate.

Fireflies are also temperature-dependent, preferring temperatures between 66-75 degrees Fahrenheit. Warmer temperatures give them the energy they need to make faster, longer and brighter flashes. It’s an all-out competition to be the best.

Fireflies blink their lights to find a mate. Male fireflies do the hard work by flying around blinking their lights, hoping that a female will notice them and be impressed.

The female perches in the grass silent and dark, waiting to be astounded. When she is, she responds, prompting the male to fly down to her to mate. She lays eggs before beginning the firefly life cycle all over again.

Not All Fireflies Use Light To Attract A Mate

I was out in my backyard a few summers ago, and I was astounded to find a firefly climbing around on top of my grill. How was it that this firefly was up and about during the day?

Digging a little deeper I found out that Minnesota has six different species of fireflies: three that rely on flashing to attract a mate, and three that don’t.

So how do these three other species stand a chance? Pheromones, or a fancy perfume that males give off, help them attract females. These three species don’t depend on the darkness and can easily live their mating life during the day.

Firefly Populations Are Declining. Why?

Probably the most common question that comes up when I talk about fireflies is, where are all the fireflies today? Many tell me that they don’t see as many as they used to. Are they on a decline? The unfortunate answer is yes. Firefly populations have greatly declined in the last 50 years.

It comes down to a few different reasons.

How Can You Help?

For the fireflies, it all begins in our own backyards:

With time and diligence, hopefully we will begin to see hundreds more fireflies flood our nights with their magical glow.

Want to learn more about fireflies? Check out the Firefly Festival and Firefly Prairie Hike for Adults at Eastman Nature Center on June 22. 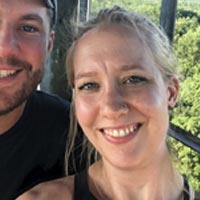 Miranda grew up at a Christian camp in the French Alps. In 2007 she moved to the United States and graduated from college with a degree in Environmental and Outdoor Education from the University of Minnesota Duluth. Since then, she has worked as a naturalist at various state parks and now the Three Rivers Park District. She loves being outdoors, going for walks, biking, and camping with her husband and baby boy.

Spiders are one of the most feared animals around, but they are important parts of their ecosystems. Learn all about these special creatures and find out the facts behind some of those myths that make them so scary.