The History of Finding Peace in the Parks

From quiet bird watching to challenging trail hikes, sun-splashed leaves to soft snowfalls, animal tracks to walking paths, parks are home to some of the best experiences in our lives. Many of us visit parks as much for the feelings we get as for the things we can do.

This way of experiencing the outdoors is not new. People have been visiting parks to decompress, find relief and feel refreshed for centuries.

The first city park in the U.S. was Boston Common. It was established in 1634 as a public pasture area – a very different function from today’s parks.

By 1800, the U.S. had 15 other parks. Throughout the 1800s, more parks sprang up with the goal of creating natural settings in urban environments.

“the feeling of relief experienced by those entering them, on escaping from the cramped, confined and controlling circumstances of the streets of the town. In other words, a sense of enlarged freedom is to all, at all times, the most certain and the most valuable gratification afforded by a park.”

He saw parks in much the same way we do today: as a place free from the stressful parts of our lives.

With New York City on a grid layout in the early 1800s, urbanization set in fast. Open space in the city began to shrink, but incredible foresight created one of the best-known parks in the country.

Land for a large park was set aside by the state legislature in 1853. The completed park was officially open to the public in 1876, ushering in a model many other cities would follow.

Making Space to Slow Down

The movement to create parks was a response to the hectic speed of life during the Industrial Revolution. The natural environment and people’s time were being rapidly consumed by the advancement of industry.

Writers and environmentalists like John Muir were instrumental in demonstrating the need to preserve landscapes in the U.S.

Although he always had an interest in nature, Muir found himself swept up in industry life until an accident nearly blinded him. He embraced his passion for nature from then on and went on to push for the creation of national parks in the U.S.

The first state park was created in California where citizens felt such a strong admiration for the land, including Yosemite Valley and the Mariposa Grove of Giant Sequoias, that they were brought under control of the state in 1864. Following that, the first national park, Yellowstone, was created in 1872.

Today, Three Rivers Park District manages over 27,000 acres of public land. How did we get here?

The Minneapolis Park Board was founded in 1883. By 1901, they were promoting the expansion of the city park system to include “outlying parks” further away from the city.

Theodore Wirth became superintendent of Minneapolis Park Board in 1906 and pushed for a metropolitan regional park system with a formal proposal just before his retirement in 1935. This proposal almost passed in 1941, but wartime needs were a higher priority.

After World War II, Minnesota saw a massive increase in suburbanization, which rapidly claimed available land around the Twin Cities.

In 1955, legislation passed to create a “special park district.”

The law that established the park district in 1957 described that the purpose of this park district was “not the establishment of parks or playgrounds of the local or neighborhood type but rather the acquisition, development and maintenance of large parks, wildlife sanctuaries, forest and other reservations, and means for public access to historic sites and to lakes, rivers, streams and to other natural phenomena.”

The first parks in Three Rivers offered open spaces for recreation, preservation and reclamation as well as areas devoted to hiking, camping, picnicking, swimming and nature study. Today, we find ourselves doing that and so much more.

As the world took on a faster pace with the Industrial Revolution and rapidly changing transportation, people in the U.S. began flocking to parks.

Workers wanted to spend time away from the monotony of industrial jobs. The Progressive Movement saw an increase in attention to workers’ health and well-being, resulting in more free time that could be spent outdoors.

More than a century later, the same experiences are still true. Many of us look to nature as an escape or a break from the stressful confines of our everyday lives. We spend our free evenings, weekends or summer vacations in parks.

Many studies suggest that spending time in nature can reduce stress levels or improve mental health for many people. Parks provide a space away from the hustle and chaos of our usual lives. Let’s take some time and enjoy these soothing spaces, decades in the making. 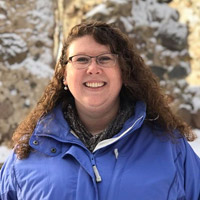 Mandy Wintheiser is a historical interpreter at Three Rivers. She has a master's degree in anthropology and has worked as an archaeologist in the Great Lakes region for many years. She loves connecting people to history and making the past come alive. She enjoys her time outside kayaking and practicing photography.

A Tale of Twin Cities: Nature's Starring Role in the Founding of Minneapolis and St. Paul

Did you know that nature is at the very heart of the story of how the Twin Cities came to be? Like this year’s spring floods, it all started with an extreme buildup of snow and ice. Learn about the series of events that led to the founding of Minneapolis and St. Paul.