The bright orange and red berries of American bittersweet (Celastrus scandens), a native woody vine, provides beautiful color in the woods this time of year — a sweet sight indeed!

And now for the bitter part: Around the Twin Cities, there is another woody vine called oriental bittersweet (Celastrus orbiculatus) that looks similar. Except this vine is highly invasive.

Oriental bittersweet is native to temperate regions in Japan, Korea and China. It was introduced to the United States in the mid-1800s as an ornamental plant. Its numerous, brightly colored fruit made it popular for holiday wreaths and other decorations.

By the 1970s, it was recognized as an aggressive invader and efforts began to control its growth and spread.

At Three Rivers Park District, oriental bittersweet was confirmed at Crow-Hassan Park Reserve in 2011. Since then it has been found in several parks and along regional trails; it is most prevalent at Elm Creek Park Reserve. All known sites are actively managed and monitored.

WHY IS IT A PROBLEM?

Oriental bittersweet is a serious threat to forests and grasslands and difficult to control once established. In full sun, a mature female vine produces abundant fruit that spreads to new locations by wildlife, especially birds.

As it climbs a tree, oriental bittersweet winds around and chokes the tree, eventually killing it or causing breakage from the weight of the vines. Once this invasive species is removed, a tree can have visible damage where the vine used to be.

HOW TO IDENTIFY ORIENTAL BITTERSWEET

Fall and winter are the best time to tell the two species apart. Once most leaves have fallen, the fruit is easy to see, even at a distance, and can be distinguished by color and position.

American bittersweet fruit has an orange outer covering and tends to cluster at the ends of the stems.

Oriental bittersweet fruit has a yellow outer covering over a red interior and is located along the vines in leaf axils, or where a leaf sprouts from the stem.

HOW YOU CAN HELP

There is good news, though: This invasive species is not widespread in Minnesota yet.

Because of this, oriental bittersweet is on the eradicate list of Minnesota’s Prohibited Noxious Weeds List. This classification requires that all parts of the plant above and below ground must be destroyed.

Here are a few ways you can help protect our natural areas: 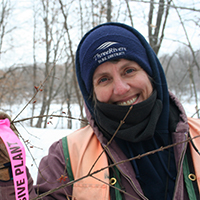 Happy Earth Day! This national holiday gives a voice to the environment and implements an emerging awareness about the effects of human impact on the planet. Find 5 ways to celebrate Earth Day today and every day.