This Take 5 for Nature piece originally appeared in the Chanhassen Villager and Chaska Herald on April 7, 2022. Take 5 for Nature is a quarterly column from staff at the Lowry Nature Center. The column aims to provide readers with information about what is taking place in the natural world around us and can be found can be found online anytime through Southwest News Media.

Imagine weighing less than half an ounce while travelling thousands of miles through piercing rain, swirling winds, and surprise snowstorms to make it home each spring. Additionally, due to your small size, you can only travel at a maximum speed of 25 miles per hour in the air. If this sounds familiar, you might be a warbler during spring migration.

Warblers are small, insectivorous bird species typically accompanied by the ability to sing distinctive warbling songs. Over 30 species of warblers can be found throughout the year in the state of Minnesota alone, and most are less than 6 inches tall. Each warbler species is known for having its own unique, colorful appearance, and it’s hard not to appreciate their splendor if you are lucky enough to see them bouncing from limb to limb during spring migration.

Many warblers arrive from Mexico and South America in late April and throughout the month of May in search of fresh insects to consume. During migration, they can fly up to 200 miles in a single day. However, for a portion of these individuals, their seasonal journey has come to an end as they intend to stay and breed in south-central Minnesota. Examples of several species that can be found nesting at the Lowry Nature Center in Victoria include common yellowthroats, blue-winged warblers, American redstarts and yellow warblers.

On the other hand, some individuals continue venturing north to the boreal forest of northern Minnesota and into Canada. Examples include Blackburnian warblers, Canada warblers, chestnut-sided warblers, and Nashville warblers. If you miss seeing these warblers this spring, don’t fret. Many of them will return briefly in the fall, but without their spring plumage and warbling songs. Those characteristics are only necessary during breeding season when trying to attract a mate.

If you are looking for opportunities to appreciate warblers and other birds, consider being a part of the Big Year of Birds. Programs and events for all ages have been planned throughout the entire Three Rivers Park District in 2022, including a celebration of our migrating feathered friends on May 14 on World Migratory Bird Day. 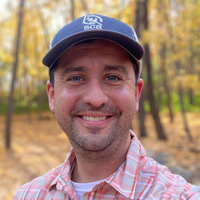 Josh Sweet currently works in the main office at the Lowry Nature Center in Carver Park Reserve. Over the past 15 years, he has taught outdoor and environmental education across the country. Josh's nature-based articles have been published by the National Park Service, The Student Conservation Association, the Minnesota River Valley Audubon Chapter, and locally in the Chanhassen Villager and the Chaska Herald. When not at the nature center, he enjoys birding, cross-country skiing, and going on adventures with his wife, Jill.

How to Start Birding

Whether you're scanning trees from the trail or a feeder from your window, birding is a flexible outdoor activity that you can enjoy in any season. Read on to find out the basics of birding and what you need to get started.

Where to Go Birding in Three Rivers (Part 1)

Curious where you can spot different birds during our Big Year of Birds? Get tips on what species you can see in which Three Rivers parks from Wildlife Supervisor Steven Hogg.

We’re all about birds in 2022! Learn why Three Rivers is celebrating these important creatures throughout the year and how you can join in.