The Sky Dance of the Timberdoodle

In celebration of the most romantic month of the year, we are featuring the American woodcock and its unique spring mating ritual – the sky dance of the so-called “timberdoodle.”

Watch the video below for a reenactment of their elusive mating ritual, and follow along with the blog post to learn all about these special birds. Get tips on how you can experience this seasonal display of courtship on your own!

In early spring around late March in Minnesota, the ground begins to thaw, worms begin to burrow near the surface, and woodcocks migrate northward and use their long beaks to probe for the worms in the soil.

The males arrive first and set up territories that include a “singing ground." If you visit a place like this at just the right time during dusk or dawn, you can witness one of the more entertaining birding experiences around — the sky dance of the so-called “timberdoodle” — the spring mating ritual of the American woodcock.

At the literal high-point of his display, the normally ground-dwelling male woodcock soars in a tornado-like spiral to between 250 and 300 feet in the air. Then he begins a descent like a falling leaf, slipping sideways, diving headlong and checking himself by a swoop upward before he dives and finally whirs his wings to break momentum upon landing.

On the ground, he repeats a nasal call that most imitate with the word “peent.” Over and over again he will *peent* to call out his location to any receptive female woodcock that might be nearby before he springs again into the air to broadcast his flight-call over his territory once again.

Catching a glimpse of the bird at any other time is tricky. They are very well camouflaged in the brush where they hunt worms. They can be tricky to spot even during the spring display since it takes place entirely after sunset or just before dawn. But what you can count on is hearing the woodcock and some fun in trying to creep close enough to see him before it gets too dark.

You just need patience and sharp ears, and a few tips.

To succeed, you need:

Then you just need to know how to sneak up and that’s why I’m here to help.

Woodcocks display just beyond the brush that grows up near the edge of fields where there’s wet land full of worms nearby, but also near some woods. Really the easiest thing is to check in with the local birding community or drive quietly along likely spots some evening before you want to head out.

Woodcocks will call in the cold or in a gentle rain, but they will not do their sky display if it is very windy, so check the weather. Also, it's cold after sunset, so pick a warmer evening.

Dress more warmly than you think you need to in sturdy, tear-proof and waterproof outer layers — in light colors that blend with the grass if you can.

Boots and gloves are a must and a scarf or hat can always be tucked into a pocket. But do not wear a hat with a brim or ear flaps like the black one pictured in the video — those hats can block your view of the sky and your hearing.

A flashlight covered with red cellophane to protect your night vision is a safety precaution, and so is bug spray and a post-experience tick-check.
Some folks ask about binoculars.

If you are really lucky, you might have an unobstructed view of the bird on the ground before it’s too dark. During past programs, I’ve brought my laser pointer in case I get to point him out to someone someday.

The right timing means you’re in position before sunset. First peents happen when light levels get low enough, between seven minutes on a clear night and 24 minutes if it’s cloudy, with flights beginning 10 to 15 minutes after that.

Sit against a tree for camouflage and support. Enjoy the evening sounds of trumpeter swans in the distance or maybe sandhill cranes.

Sit and wait. Just when you think you’ve waited too long, he flies in.

If you’re really lucky, you might see him silently glide by.

And then comes a first “peent.” Before long he settles into a rhythm. Call. Pause a few seconds. Call again … frequently turning 90 degrees between calls so his voice will carry strongly in every direction. If you’d like to see a great video of this, pause me here and go visit YouTube as noted in the video.

He might call like this 60 or 100 times after he arrives and the wait can seem like forever. Settle in patiently and listen for what comes next, because that’s when things get exciting, and then the show is on for the next half-hour.

You’ve probably heard the sound of a duck’s wings whistling through the air. A woodcock’s wings do the same thing when he flies, but it’s a bit quieter and uniquely musical.

That’s because the first three primary feathers on his wings are a different shape from the rest, so when he takes off they make this crazy twittering noise. You’ll notice a pause in the rhythm of the male bird’s peents and then you’ll hear that noise.

That’s when he’s taken off on that spiraling trip 200 to 300 feet in the air. He swoops around and around, higher and higher, and you really can’t see him because he disappears against the sky.

About 20 seconds in, his twittering gets even more rapid and he begins to call before he begins his descent.

The so-called “bogsucker” has his beak in the mud, probing for worms all the time, so to watch for predators he’s got eyes practically in the back of his head.

While he’s flying up, he’s not looking down. That twittering of flight-feathers means now is your chance to move!

At the top of his spiral-flight, you’ll hear his voice start to join with the twitter of his wings and then you’ll hear him “chirruping” as he begins the rapid zig-zag descent. There are about ten seconds of silence, then he lands and begins to call, turn and call again.

After the first set he’ll usually only peent 15 to 20 times before his next flight.

After a set of peents stops and the wing-twittering signals that he’s up, count in your head: He’s only in the air about 50 seconds, but you already lost a few.

Get up and get moving closer to the spot from where you think he was calling for about 20 seconds, then look for somewhere to get low and be still. Signal to anyone else with you and then be as still and quiet as you can.

You’d better be done moving by then because the last five to ten seconds consist of a silent glide-in to his singing grounds, when he scopes out the safety of his “spot” before settling in for another round of … that’s right … *peent* …

Sometimes he lands so close you can hear the intake of air, a “tuck-oo” or hiccup, before each peent. Listen after he glides in.

After his last flight, the bird will call several more times, fall silent, and fly away. That’s your time to enjoy what's left of the sunset and revel in the sounds of the night as you walk back to your car.

The male woodcock repeats his display in the pre-dawn, when it becomes just bright enough and ending when light levels once again are low.

No matter whether you visit at dusk or dawn, the courtship display of this strange little bird is fascinating and fun, like birding by ear and a game of Capture the flag all rolled into one.

Join a Woodcock Stalk this April

Would you like to join a naturalist for a guided woodcock stalk this April? Programs will be offered at Eastman Nature Center and possibly other Three Rivers sites.

Please email EastmanNC@ThreeRiversParkDistrict.org to indicate your interest and we will send you registration links when the programs become available.

Learn More About the Nature of Love

Tune into this month's episodes of The Wandering Naturalist podcast and discover "weird" animal mating habits, explore the love life of plants and learn about the language of flowers.

Archive and banner image: ""American Woodcock" by ShenandoahNPS is marked with CC PDM 1.0" 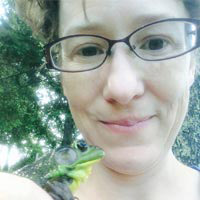 The most used bird migration path in North America passes right through the heart of the Twin Cities. Learn about the Mississippi Flyway, where to look for birds, and how you can help protect these migrators.

Wood ducks are one of the most spectacular birds in North America. Learn what Three Rivers is doing to provide the space they need to nest and thrive in our parks.