When it comes to long distance travel, efficient routes and convenient stopping points are the name of the game. This is true for both road-tripping humans and migrating birds. Birds obviously aren’t following highways with numerous tourist traps as they travel between breeding and winter habitats, but they are following flyways.

What Is A Flyway?

A flyway is like a highway in the sky. Just like a highway, a flyway is a direct and mostly predictable route for birds to migrate. There are four flyways in the United States: Atlantic (east coast), Central (along the Rockies), Pacific (west coast) and the Mississippi Flyway, which is our local migration route and the largest flyway in North America.

Where Is the Mississippi Flyway?

The Mississippi Flyway goes right through the heartland of North America starting in central Canada and running to the area near the Gulf of Mexico. As the name suggests, it follows the 2,530-mile Mississippi River.

The Mississippi Flyway is used by 325 bird species and roughly 40 percent of shorebirds and waterfowl in North America. According to Audubon, almost half of the bird species in North America spend part of their lives in this flyway. Some birds use this flyway as they migrate from the Arctic all the way to Patagonia at the southern tip of South America!

Why Do Birds Migrate?

Migrating animals generally move toward warmer climates in the winter months. In the Northern Hemisphere this almost always means south. The reason that animals migrate is often related to temperature, but the number on the thermometer is not the main reason for these big trips.

Available food and suitable breeding grounds are better answers to the question of why animals, including birds, migrate. These factors are part of the reason why the Mississippi Flyway is such a busy flight route.

Why Is the Mississippi Flyway so Popular?

There are great breeding habitats and areas with an abundance of food for a wide variety of birds along this flyway and at its endpoints. On top of this, the lack of tricky mountains or ridges to navigate (nowhere in this region reaches elevation higher than 2,000 feet) and abundance of water and vegetation make it an ideal path to follow.

A Special Vantage Point in the Twin Cities

The fact that the Mississippi River flows right through the center of the Twin Cities makes it is easy for us to witness migrators taking advantage of this flyway. In the Twin Cities, birds can be seen migrating north to their breeding/summer homes starting as early as February and lasting until June. They can be observed flying south to their winter homes from August to late November.

There are countless places to check out the mass migrations during these months. Any place with a view of the river or nearby lakes and wetlands during these months will allow you to witness the avian species that migrate to and from or though the Twin Cities. If you want to stick to a Three Rivers park, there is no better place to check out for birds using this flyway than our very own park right on the mighty Mississippi: Mississippi Gateway Regional Park!

Visitors to Mississippi Gateway are treated to a wide range of migrators, including bald eagles, cormorants, osprey, great blue herons, all kinds of waterfowl, and more. Peregrine falcons have even nested in the summer months under the Highway 610 bridge at the south end of this park.

How Climate Change Is Affecting Migrators

Climate change poses huge challenges for wildlife. When it comes to migration along the Mississippi Flyway, our planet’s warming climate can make a migrating species’ long journey even riskier due to less stable weather, heavy rainfall and increased fire risk.

Dammed rivers and urbanization also have negative impacts on the birds that use the Mississippi Flyway. Because of these large-scale threats to migrators, it is crucial that we continue to protect healthy natural spaces for these species at a local and regional level.

How You Can Help

You can help by focusing on practices that protect water quality in your watershed such as preventing yard waste and trash from making its way into the sewer – because eventually it will end up our waterways. Many of the migrators are dependent on tree canopies for their stopover spots. Planting a native species of trees in your yard helps provide that canopy.

The next time you hear the call of a loon or watch ducks swim in a local pond, think about the far away spaces these birds spend their winter months! And this fall, keep your eyes open for migrators returning south for the winter. 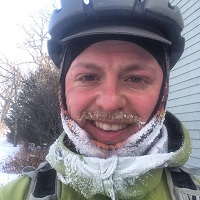 Anders Hanson is an Interpretive Naturalist at Mississippi Gateway Regional Park and helps the Outdoor Recreation School with mountain bike camps and races. Anders graduated from Luther College with a degree in biology and environmental studies and a minor in secondary education. He has worked for Three Rivers Park District for over six years, including in Wildlife/Natural Resources Management and at Richardson Nature Center, Baker Near-Wilderness Settlement, and Silverwood Park. He grew up close to and spent much of his childhood exploring Hyland Lake Park Reserve. When not at work, he likes to mountain bike, camp, see live music, and travel.