As the weather gets cooler, animals begin gearing up for winter. Different animals have different strategies for surviving the cold. Some escape the chill by migrating out of Minnesota, others hold out until spring by hibernating, and others take even different approaches.

Minnesota is home to seven species of bats, but they don't all approach winter the same way. While some migrate out of the state, others take a shorter journey to find warmer shelter in the area and stick out the winter through hibernation.

The silver-haired bat has a large range that extends through the majority of North America. In the summer they roost in southern Alaska and Canada, later migrating to the northern regions of Mexico.

Hoary bats migrate in large groups. Their winter range extends from California to Florida, as well as northern Mexico.

The eastern red bat toes the line between being a migrator and a hibernator. Individuals that live in the northern parts of the range (the upper U.S. and Canada) migrate to the southern parts (southeastern U.S. and northern Mexico) and hibernate during winter. On warm days, some may come out of hibernation to eat.

As winter approaches, many animals go into hibernation — a state of deep sleep that involves the slowing down of the heart rate, metabolic rate, and other bodily functions. Hibernation helps animals save energy in order to survive the winter.

Hibernating bats enter a state called torpor. Torpor is an involuntary state of inactivity that involves low heart rate, body temperature, and metabolic rate. It is dependent on temperature changes and food availability. Torpor can last anywhere from a few minutes to a couple of hours.

The two terms can be easily confused, but hibernation is a seasonal state of inactivity that commonly occurs in the winter, and may last for weeks to months. While torpor specifically refers to the short-term involuntary changes within the animal’s body that occurs to cope with cold temperatures.

Hibernating bats rely on fat stores to get them through the long winter. Like other hibernators, bats experience major changes in their bodies during hibernation:

The four bat species that tough out Minnesota winters by hibernating are: the little brown bat, the northern long-eared bat, the big brown bat and the eastern pipistrelle (also known as the tri-colored bat). While these bats stay in Minnesota through the winter, they do migrate from parks and other natural areas to nearby caves or human-made structures.

The hibernation season for bats begins in the fall, usually around October or November, and ends in the spring, within the months of March, April, and May.

The little brown bat hibernates in caves and mines; preferably with higher humidity and ranging from 40-60 degrees Fahrenheit. Most hang alone in their hibernating sites, but they can also be found in small clusters.

Northern (long-eared) bats have been found hibernating in caves and sand mines that have high humidity and steady temperatures.

The eastern pipistrelle hibernates in caves, mines and rock crevices. They seek spots that are warm and humid, which often causes beads of water to form on their fur.

The big brown bat tends to hibernate in caves and human-made structures in temperatures that are just above freezing.

While hibernation is one tactic to get through winter, it does come with a risk.

White-nose syndrome is a disease caused by the fungus Pseudogymnoascus destructans. It grows well in cold, damp places. The fungus grows on the exposed skin of hibernating bats.

Throughout winter, bats slowly metabolize their fat stores until they can search for food in the spring. The fungus irritates the bats, causing them to be more likely to wake up on warmer winter days.

When they wake up in the middle of winter, and their systems return to normal, they are in need of food to fuel their lost fat stores. However finding enough food to sustain them in the winter is tricky. Without food, many bats are not able to return to hibernating and may die as a result.

In the summer, you can see bats in any Three Rivers park. The best way to spot them is to stand near a river or lake around sunset. Watch the sky for their silhouettes as they swoop through the air hunting insects. In the winter, bats leave Three Rivers parks to migrate or find warmer shelter for hibernation.

Interested in learning how other animals in Minnesota survive the winter? Tune into the Three Rivers podcast, The Wandering Naturalist, to hear about the winter strategies of coyotes, beavers, butterflies and more! 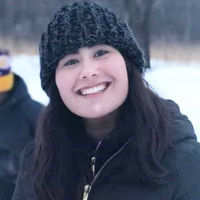 Katie has been an intern at Richardson for the last three summers. She graduated from Normandale Community College in May 2019 and is starting at the University of Minnesota in fall to get her degree in English Literature. She is currently working on learning Japanese and is excited to learn more about outdoor education as a career.

Spiders are one of the most feared animals around, but they are important parts of their ecosystems. Learn all about these special creatures and find out the facts behind some of those myths that make them so scary.