It’s August, and for many Minnesotans that means one thing: It’s almost time for the State Fair! But what if I told you that without the efforts of one stubborn Minnesota farmer, some of the fair’s most iconic attractions – the Dairy Barn, carved butter heads, and Princess Kay of the Milky Way – wouldn’t exist?

It’s true! While Minnesota is currently ranked sixth in the nation for overall dairy production, a profitable dairy industry would not have been possible anywhere in the Upper Midwest without Wendelin Grimm and his development of winter-hardy alfalfa.

Like many “Grimm” fairy tales (no relation) his story begins: “Once upon a time (1857 to be exact), in a faraway land (Laketown Township, on a farm that is now part of Carver Park Reserve in Three Rivers Park District)…”

To “city folk” like me, the connection between alfalfa and cheese, milk or other dairy products is not immediately obvious. In brief, alfalfa is THE key forage or feed crop for dairy cattle. It’s a legume (in the same family as the pea) and is a great source of protein for cattle. Cows love it, and farmers love happy cows.

Alfalfa is native to the Middle East, near modern-day Turkey and Iran. In warm climates it grows perennially, meaning it comes back every year without replanting -- like grass. Also like grass, alfalfa fields can be cut or harvested several times a season, making it a very economical source of feed.

However, in colder climates – like Minnesota – alfalfa plants were historically unable to survive the long, cold winters. Instead, they would die off, or “winterkill,” and need to be replanted every year – an expensive effort that made profitable commercial dairying impossible.

In 1857, most American farmers agreed that perennial stands of alfalfa could not be grown north of Kansas. Luckily for Minnesota’s dairy industry, no one told that to Wendelin Grimm.

From Germany to Minnesota

Wendelin Grimm was born and raised in Külsheim, Germany in an agricultural region locally known for its lush alfalfa fields (though in Europe, alfalfa is more commonly known as Lucerne). Years of experience farming in that region taught Wendelin the value of alfalfa as a feed source for cattle.

When he moved his family from Germany to Minnesota in 1857, one of the few possessions he chose to bring with him was a small bag of alfalfa seed taken from his own stock.

In the spring of 1858, Wendelin planted this seed on his new American farm. Though the plants thrived during the summer months, nearly all of them died during the first harsh Minnesota winter.

Undeterred, Grimm collected seeds from the few plants that did survive and used them to replant the field the following spring. He repeated this process each spring for the next 20 years. The result was Grimm’s development of North America’s first winter-hardy alfalfa.

"A Prize Worth Hundreds of Millions"

Unfortunately for Wendelin Grimm, his work went largely unnoticed during his lifetime. When he died in 1890, only his immediate neighbors – with whom he shared his seed stock – knew that Grimm’s alfalfa was special.

It wasn’t until 1900 that Arthur Lyman, a local schoolteacher, brought Grimm’s alfalfa to the attention of professor Willet Hays of the University of Minnesota.

Hays began experimenting with the winter hardiness of Grimm’s alfalfa. In 1904, when he was appointed Assistant Secretary of Agriculture by President Theodore Roosevelt, Hays brought his work on Grimm Alfalfa with him to Washington.

As it turns out, the U.S. Department of Agriculture had been working for years to locate a strain of alfalfa that could survive the severe winters of the American northwest. Studies of Russian varieties had failed to produce results. Suddenly, with Hays’ introduction of Grimm Alfalfa, the USDA appeared to have found what it was searching for.

In a 1907 report, the USDA recommended widespread planting of Grimm Alfalfa throughout the northwestern U.S., calling it “a prize worth hundreds of millions.” By 1920, Grimm Alfalfa was the source of nearly all alfalfa seed produced in the northern U.S. and Canada.

Meanwhile, Back at the Ranch

Grimm Alfalfa’s value as a feed crop spurred the development of Minnesota’s dairy industry. In 1924, 34 years after his death, hundreds of members of the newly formed Alfalfa Growers Association converged on Grimm’s farm, erecting a monument to the man whose work had made them rich.

The monument – and Grimm’s Chaska-Brick farmhouse (c. 1876) – still stand today. The home, now the centerpiece of the Grimm Farm Historic Site in Carver Park Reserve in Three Rivers Park District, is open for tours seasonally and by appointment. It contains modern exhibits that tell the story of how Grimm Alfalfa earned Carver County the nickname “Golden Buckle of the Dairy Belt.”

If you head to the State Fair this year, remember the tale of Wendelin Grimm. Your cheese curds, buttered corn and ice cream are all made possible by his determination and dedication to developing alfalfa that could withstand Minnesota’s harsh winters. 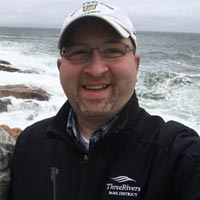 Bill Walker is the Cultural Resources Program Manager at Three Rivers. He has been with Three Rivers for 10 years and has more than 20 years of experience in the field of cultural history, including working for the National Park Service and a variety of local historical societies and museums. Bill loves that all 27,000 + acres of Three Rivers parklands have a human story to tell – some reaching back over 10,000 years! Knowing the stories of how people have connected with the land in the past helps us construct a sense of place for enjoying these spaces today.