Owls are rarely seen in Three Rivers Park District because they are nocturnal and normally only active at night when there are few people in the park. There are 10 species of owls (see table below) that have been found in our parks. Most of them are only seen during the winter and, even then, not very often. Boreal and Northern Hawk Owls have only been seen once each during the last 25 years. 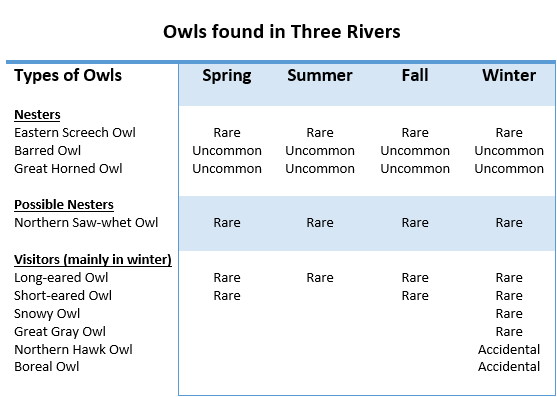 Northern Saw-whet Owls have not been found nesting in the parks, though there are recent nesting reports from Anoka and Ramsey Counties. They do migrate through the parks in the fall. An ongoing banding study in Carver Park Reserve by the North Central Bird Observatory catches up to 20 owls a night and 128 for the season. The banding takes place in October and November.

Of the three species that nest in the parks, the one most commonly seen or heard is the Great Horned Owl. They are an interesting owl in that they start their breeding season in the middle of the winter! They begin calling in January and spend February and early March sitting on eggs. It takes just over 30 days for the eggs to hatch. The chicks then stay in the nest for 6 to 8 weeks and are flying by the time they are 10 weeks old.

Great Horned Owls do not make their own nests. The will use nests from other birds, including Great Blue Herons, Red-tailed Hawks, and Bald Eagles. By nesting early they can take over the nest before the other birds return from migration. They will also use squirrel nests, in hollow trees, and specially-built nesting boxes. Three Rivers used to install owl nest boxes, but we found out they were not used much because there are adequate natural sites, so we have stopped using them.

Great Horned Owls can be very tolerant of people. A pair of owls nested along a trail in Silverwood for several years. People were walking within 10 feet of their nest tree with some photographers getting much closer. The owls didn’t seem to care, but it caused some stress for the people watching the owls. There were a number of opinions, some loudly given, about how close people should get to the owlets. Last year the owls nested in a different part of the park and did not have the visibility of earlier years.

Great Horned Owls are the heaviest owl regularly found in the parks weighing in at over 3 pounds. In owls and a number of other bird species, the females are larger than the males. The only North American owl heavier than Great Horns is the Snowy Owl where a female can top 4 pounds.

The size of the Great Horned Owl allows it to catch larger prey than other owls. Great Horned Owls will regularly catch and eat squirrels, rabbits, and skunks. They have also been reported capturing cats, which is another reason to keep your cat inside, especially at night.

This Wednesday, tune into the Three Rivers podcast, The Wandering Naturalist, and discover more about owls and their adaptations to survive in the winter.

Learn new conversation starters and be the first to know about future blog posts by subscribing below.