Camera Trapping: A New Way to Survey in Three Rivers

Camera trapping, a newer volunteer project within Three Rivers Park District led by Wildlife Biologist Steven Hogg, started with a question: Where are all the skunks?

“I really had an interest of why we were not seeing roadkill skunks around our parks as much as we used to and it begged the question, ‘Do we have skunks in our parks anymore?’” Steven said.

And that observation got him thinking about how the natural resources department at Three Rivers can actively monitor fur-bearing populations in the parks.

Steven said the department has tried wildlife surveys in the past using carnivore scent stations, which is part of a state DNR survey project.

“But we haven’t had the best of luck with that because you have to be able to come in and read tracks from the night. And something could go wrong really quickly in one night, like a mower comes by and mows over your survey point or if it happened to rain that night and you can’t identify the tracks,” Steven explained.

“Camera trapping has been something I’ve been thinking about for quite some time. It finally came to fruition due to the fact we were able to get another biologist on site to help with other projects,” Steven said.

What is Camera Trapping?

A camera trap is a remotely activated camera equipped with a motion sensor used to capture wild animals on film when no one is present.

The Three Rivers camera trapper volunteers set up cameras off-trail in the parks. They leave the cameras in place for three weeks before returning to them.

After three weeks, they switch out the SD cards, and move the camera to a different location in the park. The volunteers then take the SD cards home, look through the photos and tally how many of each critter they see. They repeat this process for the entire year and submit their tallies to Steven, who keeps a master document of the wildlife counts from each park reserve.

“The volunteers also keep track of the location where they’re putting the camera and the habitat type it’s in — an open area, a wooded area, early successional area, etc. — which gives us a good idea of the kind of wildlife to expect,” Steven said.

Steven said he modeled the project after North Carolina’s Candid Critters citizen science camera trap survey program, which provides best practices and standards for setting up the cameras. “Really it says you can put the cameras out anywhere, but to avoid things like big game trails because you don’t want to get just deer walking by constantly,” Steven said.

He said there are also standards for strapping cameras to trees at certain heights and ensuring no brush, logs or other obstructions are in the way of the lens that could potentially set off the camera sensor.

“It’s kind of a neat way to survey and a very easy way to allow citizens to become citizen scientists and to get really good data on what we have using our parks. We’re really interested in what we have out there for mammals, or fur-bearers,” Steven said.

Currently Steven has volunteers set up to help in each park reserve in Three Rivers — Baker, Carver, Crow-Hassan, Elm Creek, Hyland Lake, Lake Rebecca and Murphy-Hanrehan. “Right now that’s where we are concentrating because those parks have larger scale natural land masses.”

“It’d be interesting to go into our regional parks and we’ll expand to that, but it has been a slow-growing project just because we have to buy all the cameras, SD cards, batteries and we have to do all the training for the volunteers. But it’s been a good start,” Steven said.

There are currently 10 volunteers on the project who have put in over 400 hours of their time in the last two years. Together, they have taken nearly 70,000 photos, finding animals like white-tailed deer, raccoons, coyotes, squirrels, opossums, sandhill cranes, barred owls, mink and even skunks.

In 2017, 24 striped skunks were counted and in 2018, only one skunk was tallied. “You can’t make too many inferences with this, but it’s something for us to watch,” Steven said. He said skunks are known to ebb and flow in their populations because they get a lot of diseases.

“It is something we’ve talked about bringing towards the University of Minnesota to see if they have a graduate student who’s interested in studying skunks and could try to help us determine what’s going on here.”

Steven said the project also piqued his curiosity about other animals in the park, like otters and mink.

“One thing we actually found this last year is that we’ve got fishers at both Elm Creek and Murphy-Hanrehan parks. We’ve had some documentation of fishers in our parks for the last 10 years, but this is for sure perfect documentation that they are using two of our parks. Now we will watch that population and see how they’re doing.”

“All of these fur-bearers are very, very elusive. Birds are easy for us to survey. We can go out and do breeding bird surveys in the spring and identify the birds by song. But to do this is very difficult. There are so many more logistics in surveying for fur-bearers and it has not been an easy task for a very long time,” Steven said.

He said the work the volunteers are doing has given the natural resources department good information for wildlife management and has helped raise questions for research.

“And the volunteers love it! They are really passionate about this project. It’s been a really cool way to get people involved with our parks and get them interested in what’s going on in our parks,” Steven said. 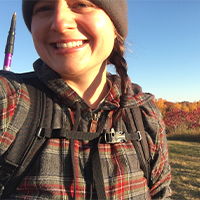 Alyssa Schauer is part of the marketing team at Three Rivers. She formerly worked as a journalist at a small-town newspaper and volunteered with the Minnesota Conservation Corps to clear and maintain trails in Superior National Forest and the Boundary Waters. Outside of work, she spends time in the woods looking at everything up close (especially ferns and spiders!) and enjoys canoeing with her husband, playing Nintendo and raising a pride of four naughty, darling cats.