A Campaign for Trail Safety

More than five million visitors a year use trails managed by Three Rivers Park District. Safety for all these bikers, runners, walkers, commuters and horseback riders is a top priority. Trails are a shared public space – safety and courtesy are necessary to create a positive experience for everyone. Three Rivers Park District encourages users to respect each other through a “Share the Trail” safety campaign.

“Sharing the Trail” is a simple concept. It means sharing the trail with multiple users, even if they use the trails differently than you do. The system works best when everyone respects one another’s use of the trails and follow the same general rules. Trail safety messages are placed around the trails in various locations, catching the attention of our users and creating teachable moments.

However, from time to time, trail users may find themselves in conflict with other users.

Another common safety concern revolves around obeying traffic signs. Cyclists are sometimes required to stop at roadway crossings. There is often confusion between motorists and cyclists in regard to right of way. Overall, cyclists need to obey traffic signs in order to stay safe.

Some of our turf trails allow horseback riding. A common conflict involves walkers or runners who may spook a horse. Horses cannot see directly in front of their face or directly behind their tail. Announcing your presence by saying “hello” or “on your left” and slowing your speed helps greatly.

Another conflict involves dogs. To ensure everyone’s safety, it’s important for dogs to be on six-foot, non-retractable leashes at all times. This is the Park District’s policy and it’s especially important when dogs are sharing the trail with horses.

Three Rivers has partnered with local bicycle artist Adam Turman to develop a series of images to help communicate our trail safety efforts. These eye-catching messages can be seen on regional trail shoulders, trail kiosks and on bicycle wheel spoke cards. 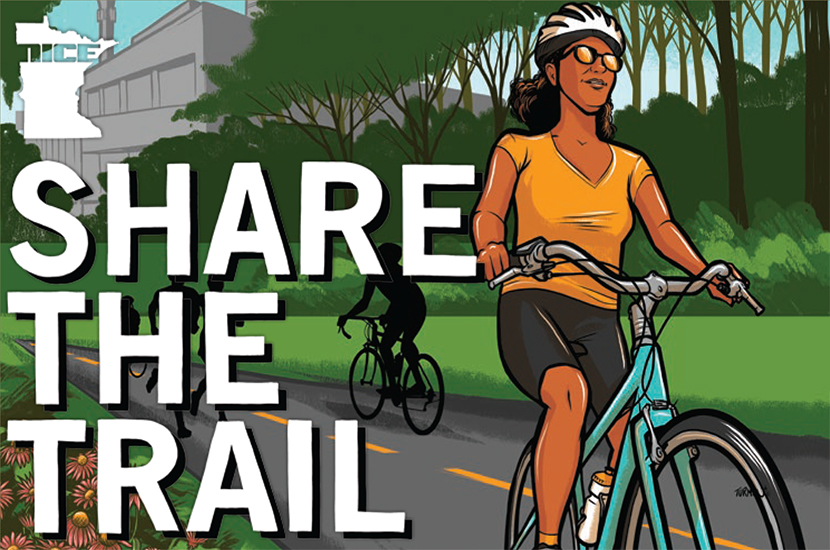