Several months ago while driving between Champlin and Delano, I noted the parks and trails I passed along the way and conceived an idea. There were all these lovely trails, so what if someone biked them from park to park? And what if that someone was me?

I have a short but meaningful relationship with Three Rivers Park District. I trained for my first marathon at Elm Creek and on the Rush Creek Regional Trail, and I ran my first 50K at Murphy-Hanrehan. A conservationist at heart, I have a love for spaces that exist for the purpose of preservation and restoration, with our own entertainment coming secondary.

So that’s where this ride began: as a tribute to the outdoor spaces that I love so dearly and the park reserves that exist for their own sake. It would be a 140-mile journey, over three days, connecting all seven of them.

Technically speaking, a person could bike this whole route in one day. It’s entirely possible. But I wanted adventure – a complete experience that would challenge me beyond the fitness of my legs.

So when I planned this as a multi-day trip, it wasn’t just that I would tag the park reserves and hit a hotel. Oh, no. I would load up my bike with everything I’d need for three days – food, tent, clothes, everything – and after hours of riding, I would set up camp, cook and look after myself. While I had ridden 50 miles once before, I had never bike-packed.

The order would be Elm Creek Park Reserve in Champlin, Hyland Lake in Bloomington, and Murphy-Hanrehan in Savage for day one. I would camp a few miles farther down the way at Cleary Lake Regional Park in Prior Lake. Day two would see Carver Park Reserve in Victoria and Baker Park Reserve in Maple Plain, where I would camp for the second night. Day three would contain Lake Rebecca in Rockford and Crow-Hassan in Hanover, and I would finish triumphantly at Elm Creek.

Beginning this journey was less worrisome – and less exciting – than I thought it would be. My husband drove me up to Elm Creek. We unloaded my bike, packed all my things where they belonged, and I was off. My husband shadowed me for a short time, taking some photos before I left the park. Once we snapped an obligatory photo by the park sign (above), I was on my own.

It was in the mid-40s when I began, as it would be each morning. Sparkling blue skies and a bright sun reflected off the kaleidoscope of fall colors around me. The sound of the wind was my constant companion, mingling with the inner monologue that would keep me company for three days.

I could have built a shorter route than the one I ended up with, but I wanted my ride to be beautiful, with as many trails and trees and wetlands as possible. So my route took me in arcs around lakes instead of straight lines down streets, through parks instead of neighborhoods.

This way, I got to experience even more Three Rivers spaces. I got to know the Medicine Lake Regional Trail, I rode parts of the Luce Line and the Lake Minnetonka LRT, I touched Fish Lake and French regional parks. Later that day, I discovered Nine Mile Creek Regional Trail, a gem running from Hopkins to Edina.

My heart soared when I saw the sign announcing Hyland Lake Park Reserve. As I took a selfie there, I was gratified to feel like I finally had something to show for the trip.

At the Bloomington Ferry Trail Bridge, my husband joined me for a mile or so. Riding along the river, surrounded by nature, the contentment vibrated through me. “This is the best day of my life,” I whispered to myself. I was coasting on pure molten joy.

The rolling landscape of Savage was a formidable challenge, and I pushed my way into Murphy-Hanrehan in the early afternoon. I was relieved to be so close to finishing my first day, and a few miles later, I made it to Cleary Lake for the night.

Heavy with fatigue, I wearily ate some chocolate chip cookies and washed them down with a bottle of Mountain Dew. I was hot-and-cold, tired-and-alert. I crawled into my tent after a meager meal, wanting nothing so much as to just hold still for a while.

It was too cold for reading a book before bedtime, so with my hands tucked safely inside my sleeping bag, I cued up my favorite podcast. Huddled in the dark, listening to LeVar Burton read me a science fiction tale with the trees rustling around me, it didn’t feel real. I felt so far away. It all seemed so impossible.

And I slept, fitfully, eventually.

The winds were ferocious by the time I broke camp, and the route from Prior Lake to Maple Plain called for lots of wide-open country roads. I settled in for a long day.

I began on the Scott West Regional Trail, which took me through Prior Lake. I whooped wordlessly at the sky when I caught a tailwind on a long downhill on my way toward Shakopee. There, I met the Minnesota Valley State Trail, a green and vibrant thing weaving through the Minnesota River floodplain on its way to Belle Plaine. I was terribly disappointed to leave it behind as I began the grueling climb out of Chaska.

Another stretch of country roads and I was through Victoria and into Carver Park Reserve. The colors were so bright here, and I marveled at the deep purple of the asters against the golds and yellows of the tall grasses, with orange and red foliage in the distance. Exhausted from the wind and hills, leaving Carver was one of the hardest parts of the trip.

Getting to Baker meant another hour and a half of mostly country roads with a short respite along the Dakota Rail Regional Trail. This trail took me past Gale Woods Farm and all the way to Mound, where I left the trail and headed north toward Baker Park Reserve – my campground for the night.

Riding into Baker was a welcome relief after the last stretch of rolling country roads. Dinner was accompanied by the mashed bits of what had been four chocolate chip cookies, and I wolfed down a candy bar as I crawled into my sleeping bag.

Another story from LeVar Burton and I was asleep.

Bittersweet reluctance to finish mingled with the prospect of real, honest-to-goodness rest at the end of the day’s journey, and I broke camp quickly on day three.

From Baker, it would have been a quick and easy ride straight up the Lake Independence Regional Trail to Crow-Hassan. Would have been, except I needed to detour some five miles west to Lake Rebecca first. Fortunately, the country roads this day were perfect. Wide enough shoulders that I didn’t feel nervous about traffic, and gradual inclines with long, swooping downhills where I could tuck myself and fly.

Lake Rebecca was perhaps the brightest, most golden of the parks, with quiet corridors of yellow. I put on some extra miles getting to the entrance of the park to get a selfie with the sign before departing for Crow-Hassan.

Unlike the other park reserves, Crow-Hassan doesn’t have bike trails, instead providing double-wide hiking and horseback riding trails. It was a comparatively short ride to get there, and without trails to ride within the park, my time there was brief.

With that, I was on my way home.

As I approached the end, I was overcome with the thrill of being Nearly Done. The anticipation is better than being Done, and when I pulled up in front of an Elm Creek sign, snapping my selfie with a big grin, I paused. I stood there for a moment, looking down at my bike, and I whispered to myself, “Now what?” Only three days and I somehow couldn’t understand what it would be like to wake up the next morning and not need to get on and ride.

But all adventures end eventually. My husband was waiting a few miles away at the chalet where he’d dropped me off three days earlier. I rode slowly, taking photos. Procrastinating.

Then I was done.

There was no celebration, no finish line. I didn’t get a medal. I got a big hug from my husband, and on the way home, I got a hotdog from Dairy Queen. And then I got a nap, which was perhaps the best reward of all.

In the days since, I’ve had time to reflect on the trip. There’s something meditative about the practice of long-distance biking - or running, or skiing, or anything where there’s nothing to do except that one thing. Where your immediate life narrows to the necessity of doing it, and then you hit that glorious moment when everything clicks and the ground flies beneath you while your mind wanders and you take in the entirety of the world around you.

It was so much more than just a tribute to the parks. It was a liberation, a realization of all that I was capable of if only I gave myself the chance.

Time to plan another trip. 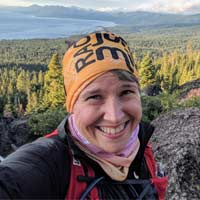 Lisa is an ultrarunner (and, apparently, a cyclist) in the Twin Cities. As a child, she wanted to be a paleontologist, then a park ranger, then a lawyer, then an opera singer. So she became none of them and is instead an office assistant. Her greatest priority in life is spending time in nature, exclaiming over tiny flowers and grasses. Lisa believes that life is better when you find a way to be delighted by simple things and is always up for an adventure. She is exhausting to all who know her.

If you've been to French Regional Park, you may have been lucky enough to cross paths with — or even befriend — longtime park guest Ray Robinson. You can find Ray on a bench by the beach listening to jazz and chatting with fellow park-goers.

People of the Parks: Wandering Pine

Meet Jen Theisen, also known as Wandering Pine. She's a hiker, a Boy Scout leader, a cleaner of the earth, an ambassador for Women Who Hike, a blogger and a loyal Three Rivers guest. Learn how she found her place in the outdoors and her favorite parks in Three Rivers.