When we think of winter in Minnesota, we think of frosted tree branches after a fresh dusting, shoveling out our cars and sidewalks after a blizzard, blazing a trail through the woods on skis, and trudging through the slush in March and April. In short, we think of snow.

If you caught the first episode of The Wandering Naturalist, the new Three Rivers podcast, you know all about how snow affects plants and animals and how people dealt with snow before modern conveniences. You also know that we have less snow on the ground than we used to.

A changing climate has changed our relationship with snow. While our predecessors had to find ways to stay warm, we are looking for ways to bring back the snow.

For humans, unreliable snow cover means an unreliable season of winter activities. As a way to adapt, we’ve turned to snowmaking.

While average snowfall totals in Minnesota have not changed much, warmer temperatures, especially overnight, and more winter rain mean less snow is sticking around for the season. Compared to the ‘90s, we have 17.5 fewer nights with low temperatures below freezing.

This has dramatically affected the cross-country skiing season.

For snow to be packed for skiing, there should be at least 4-6 inches on the ground. According to the Minnesota Department of Natural Resources, December snow depths in the Twin Cities now average 3.76 inches. January and February aren’t much better with average snow depths of 4.99 inches and 5.62 inches, respectively.

We’ve noted a drop in consistent natural snow cover in many Three Rivers parks, too. At Elm Creek Park Reserve, there was an average of 83 skiable days from the ’92-’93 season to the ’98-’99 season. In the last decade, the average skiable days on natural snow dropped to 64 days.

This season, natural snow trails at some Three Rivers parks have not opened yet, and others opened the last weekend of December, but have not been able to consistently stay open. Currently, no natural snow ski trails are open in Three Rivers parks. Despite that, skiers have been getting laps in at Elm Creek since November 17 and speeding down the runs at Hyland Hills since November 16 thanks to snowmaking.

To get started, conditions have to be right: cold.

“The temperature should be 28 degrees or below and dropping,” says Tony Edmonds, Ski Area Specialist and snowmaking expert at Elm Creek Park Reserve. “We will run the snow guns overnight if the temperatures are dropping, but not if they’re staying the same. Then we’d be wasting power, water and labor.”

At Elm Creek, water from a reservoir is pumped through underground piping and hoses to the snow guns. At the same time, air is pumped into the snow guns through a compressor, blasting the water into tiny particles that freeze and become snow once they hit the cold air.

At Hyland Lake Park Reserve, which began making snow in 2013 for cross-country skiing, water for snowmaking is drawn from Hyland Lake. Because there are restrictions on how much water can be drawn from the lake each year/season, snowmaking for Nordic ski trails often starts a little later and under colder temperatures than at Elm Creek. This makes more efficient use of the water and helps ensure the snow that’s made sticks around for the entire season.

To make snow, it takes 12 to 15 people working around the clock. “The job is a little strenuous,” Tony added.

The water for snowmaking at Hyland Hills is drawn from a pond by the ski area. A fountain installed in the pond helps cool the water by exposing it to the lower air temperatures, allowing for snowmaking earlier in the season than for the cross-country ski trails. The reservoir at Elm Creek has a similar setup, and therefore a similar snowmaking timeframe.

To make snow for the tubing hill, ski trails and downhill area at Elm Creek, crews have to move the snow guns and power cords, sometimes 24/7 while the temperatures are cold, to make enough snow to cover the area. Once there’s enough snow, they shape it using a Snowcat. With the tubing hill and downhill area up to 10 feet deep in some places, it can take more than two weeks to get it ready to open for the season.

Less natural snow and warmer temperatures pose challenges to snowmakers, too. “Less reliable cold temperatures mean we have to be prepared all the time,” says Tony. “When it’s cold enough to make snow, we have to be ready to go. It also means there are fewer days available to make good snow.”

Earlier we mentioned that natural snow trails at Elm Creek are open an average of 64 days per season. Even when natural snow trails are open, however, the quality often varies greatly, with some days only marginally skiable. In these conditions, they can also be difficult to groom.

Manufactured snow trails, on the other hand, are open an average of 105 days, and offer much more reliable ski conditions. They are groomed almost nightly and conditions are usually good.

So far this season, Three Rivers skiers have had 52 days of cross-country skiing. Without snowmaking, skiable days would be in the single digits. 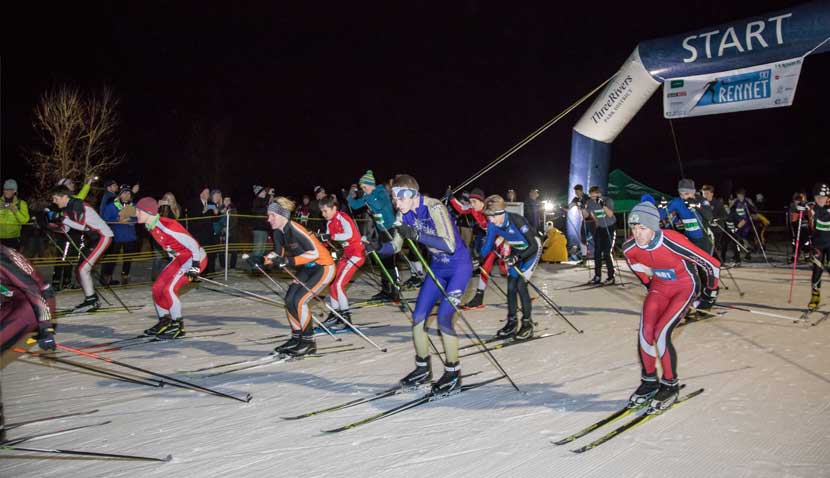 An extended season is not only good for recreational skiers, but for competitive skiers, too. Many high school teams practice and race on the manufactured snow trails.

In 2007, three years after Elm Creek began making snow for cross-country skiing, Doug Boonstra, Nordic Coach for Eden Prairie High School said, “It would not be an exaggeration to say that having manufactured snow at Elm Creek has saved our sport. We would have to cancel countless numbers of races, and practice would be limited to running and roller skiing.”

This sentiment is still true today. Sue Harrison, Mound Westonka High School varsity Nordic ski team head coach, echoed Doug’s appreciation for manufactured snow and added that a lack of natural snow also poses challenges for recruiting skiers. “It is hard to keep a team together and build enthusiasm for the sport when we are running and pole-hiking more days than we get to ski.”

Sue added that Mound Westonka has only had one race this season on natural snow, and it involved a four-hour bus ride north to the Mesabi Invite.

Just a few weeks ago, on December 18, the Lake Conference Nordic ski races carried on at Elm Creek despite temperatures over 40 degrees. 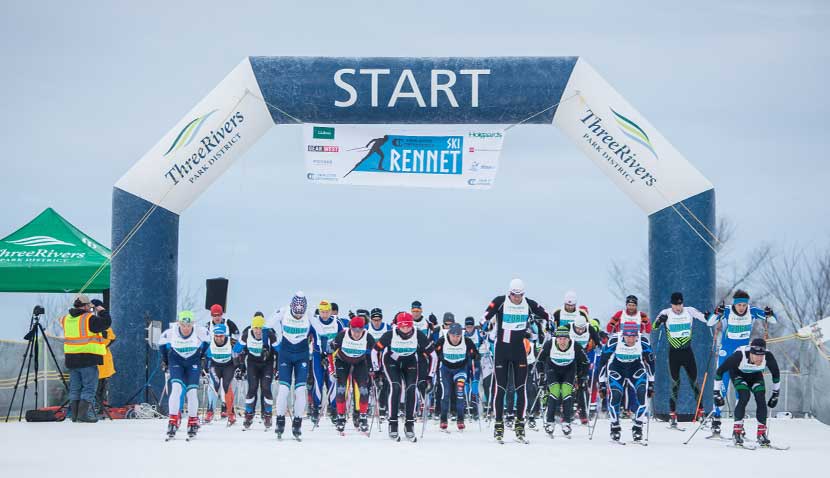 At Hyland Lake Park Reserve, Three Rivers’ own Twin Cities Orthopedics Ski Rennet race takes place each January – sometimes even after multiple 40-degree days. This is only possible because of snowmaking.

“Having snowmaking has provided on-snow training and racing for many weeks in which we would otherwise be doing more dryland training,” Sue said.

Nordic skiing has been a tradition in Minnesota since the 1800s when Norwegian immigrants brought the sport with them. With some help from snowmaking, it continues to be a favorite winter pastime.

There’s nothing quite like gliding through snow-covered trees or past an open prairie on skis. If you’re new to the sport or have never tried it, don’t miss out. A lesson at Elm Creek or Hyland Lake will have you ready to hit the trails in no time. With only 72 days of winter left, what are you waiting for?

Like what you read? Scroll to the bottom of the page and subscribe to the be the first to find out about new blog posts.

With more than 27,000 acres of land, visitors and staff see changes every day in our parks and on our trails. Much of what our staff has noticed has been a transformation in our weather and climate. Join the conversation.

World Car Free Day, held September 22, is an annual day with the goal of encouraging a world less reliant on cars. Read on for ideas to ditch your vehicle and challenge yourself to see if you can go car-free for one day.