Winter solstice, which falls on December 21 this year, marks the shortest day of the year when we will have just 8 hours and 46 minutes of daylight between sunrise and sunset.

The winter solstice also marks the astronomical beginning of winter, at 10:19 PM exactly, when Earth’s North Pole is tilted farthest away from the sun, though here in Minnesota, we might feel winter started much earlier. From this time forward, our days will begin to lengthen. Only a minute or two at first, but it won’t take long for it to be noticeably lighter for longer.

The word “solstice” is derived from the Latin words “sol” (sun) and “sistere” (to stand). Winter solstice is also known as “The Day the Sun Stands Still.”

Cultural traditions from around the Northern Hemisphere have long told fireside stories about mythical monsters who steal the sun, play tricks on or try to eat hapless humans in the darkness. But sometimes solstice stories are about kinder beings who help us through the leanest time of year, too.

In Finnish mythology, it’s told that Louhi, the “witch goddess of the North,” kidnapped the Sun and Moon and held them captive inside a mountain, causing the darkness of winter.

The Yupik peoples, indigenous to the Artic, tell the story of the Kogukhpak, subterranean monsters with bulbous bodies and frog-like legs who could only be killed by the sun. On the winter solstice, the Kogukhpak emerged to hunt and mammoth carcasses were said to be the corpses of the ones who stayed out too long and died when the sun returned.

In Greek Mythology, the Kallikantzaros were angry, hairy, gnome-like creatures who lived underground and tried to cut down the tree of life. Like the Kogukhpak, they could also be killed only by sunlight and emerged during the solstice to wreak havoc on homes and villages.

They were reputed to be rather dumb and unable to count past 3, so villagers put out colanders to ward them off. The Kallikantzaros would end up trying to count the holes in the colanders until sunrise and then have to go back underground before they could cause any mischief.

During winter solstice, there were also stories about kinder beings, and a variety of gods and goddesses were worshipped, like Tonantzin in Mexico, Cailleach Bheru in Scotland, Horus in Egypt and Spider Grandmother by the Hopi.

Winter solstice has also been known to celebrate Earth’s regeneration or rebirth, and the Scandinavian Goddess, Beiwe, is associated with health and fertility. It was believed that she travelled through the night sky in a structure made of reindeer bones with her daughter, Beiwe-Neia, to bring back the greenery on which the reindeer fed. For this reason she was worshipped during this time of year.

In Italian folklore, La Befana is a goddess who rides around the world on her broom during the solstice, leaving candies and gifts to well-behaved children. Placing a rag doll in her likeness by the front door or window entices her into the home.

The Story of Tomte 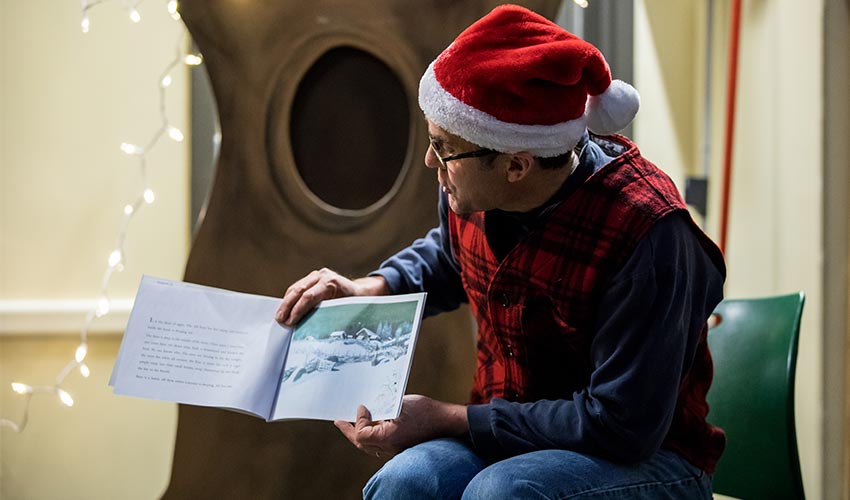 Growing up, one of the favorite books from Tim Reese, supervisor at Gale Woods Farm (pictured above), was The Tomten, a picture book adapted by Astrid Lindgren (creator of Pippi Longstocking) from a poem published by Swedish author Viktor Rydberg in 1881. It is accompanied with beautiful illustrations of a farm in mid-winter by Harald Wiberg.

"It is the dead of night. The old farm lies fast asleep and everyone inside the house is sleeping too.

The farm is deep in the middle of the forest. Once upon a time someone came here, cut down trees, built a homestead and farmed the land. No one knows who. The stars are shining in the sky tonight, the snow lies white all around, the frost is cruel. On such a night people creep into their small houses, wrap themselves up and bank the fire on the hearth.

Here is a lonely old farm where everyone is sleeping. All but one. . ."

There are many versions of the Tomte, who is also called “Nisse” across Scandinavia, and he is usually depicted as no taller than three feet with a long white beard and a pointy red wool hat. These stories come down from hundreds of years of oral tradition in which he was equally kind, sneaky, helpful or devious.

In many of the stories, including Lindgren’s, he takes up residence at a farm where he only appears to the children and takes care of the farm animals. He protects them from harm and is known to have a temper toward to farmers who neglect or mistreat their livestock. A bowl of porridge is often set out for the Tomte in order to stay on his good side.

The Tomte had links to the original inhabitant of the farm and was believed to be the soul of that man. (Source: A Study of the Country Sweden by Anastacia Sampson.)

So the idea of leaving a bowl of porridge may have stemmed from paying respect to the dead. He is reputed to particularly like a bit of butter in his porridge. Then again, who doesn’t? 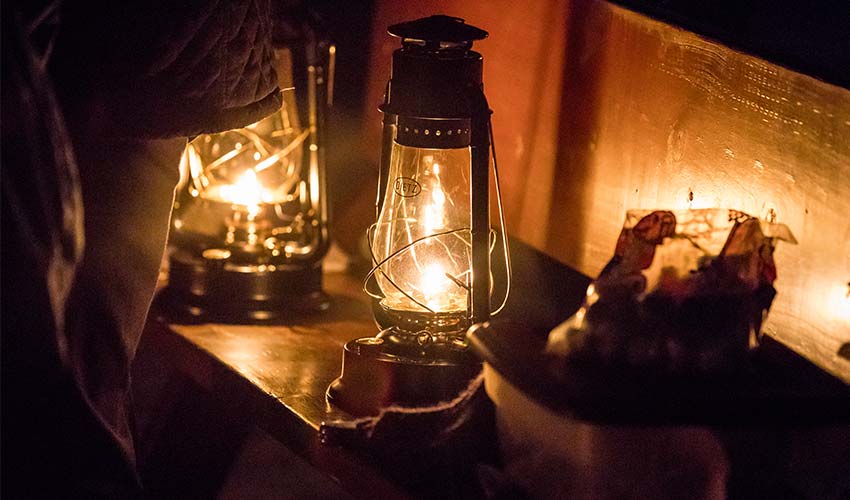 Before humans understood the solar system and how gravity sends us around the sun on our round and slightly tilted planet, we told these stories to explain the darkness, entertain or frighten each other, or to keep our spirits up and provide reassurance.

Now that we understand the physical forces of the universe a little better, we are confident that spring will eventually come, even in Minnesota.

We hold back the darkness with electric lights and the cold with furnaces we don’t even think about, but ancient myths like the Tomten serve to tie us back to the earth and our ancestors.

They help us acknowledge the wonder and mystery of nature and hopefully inspire us to walk a little more humbly on the earth.

Winter Solstice Festivals and Celebrations around the World

Winter solstice is also a day that has been celebrated around the world for thousands of years in many different cultures. Some festivals include the Hopi Indian Festival of Soyal, the Polish celebration of Gody, Greece’s Brumalia celebration and the Hindu celebration of Makar Sankranti.

The Feast of Juul

This was a Pagan Scandinavian winter festival when Juul logs were burned and fires were lit to symbolize the heat and life-giving properties of the returning sun. It was believed that the yule log had the magical effect of helping the sun to shine more brightly.

The people who celebrated during this festival drank Meade around the bonfires while minstrel-poets sang of ancient legends.

The Festival of Chaomos was a Pakistani celebration in which a small number of Kalasha or Kalash Kafir people observed the ritual of baths as a part of a purification process.

There was also singing and chanting, dancing, bonfires, festive eating and a torchlight procession. This celebration lasted for at least 7 days and it is during this time the demi-god Balomain passed through the Kalash region.  He is said to be collecting prayers as he goes and is worshipped during the festival.

This festival is a very important one for the Chinese and other East Asians. The Dongzhi Festival occurs on or around December 22 when the sun is at its weakest and the daylight is the shortest. This is the first day of the Dongzhi solar term.

Origins of this festival go back to the Yin and Yang philosophy of balance and harmony in the cosmos. With the hours of daylight increasing, there is an increase in positive energy flowing in.

Traditionally this festival is a time for family gatherings. Families in southern China often make and eat Tangyuan (balls of glutinous rice) which symbolize reunion.

In northern China, dumplings are traditionally prepared and eaten. This is said to originate during the Han Dynasty when Zhang Zhongjing ordered his apprentices to make dumplings with lamb to help keep poor children warm and to keep their ears from getting chilblains.These and other festive foods also serve as a reminder that you are now another year older and should behave better in the coming year.

Today, many Chinese around the world still believe you are “a year older” right after the Dongzhi celebration.

Saturnalia is an ancient Roman Pagan festival honoring Saturn, the god of agriculture and time. It started on December 17 and generally lasted 7 days.

This festival began with rituals and sacrifices at the Temple of Saturn at the end of which the crowd was dismissed with the cry of “Io, Saturnalia!,” a sign for the happy festivities of family parties and other private gatherings to begin.

During this week of celebration, all work and business came to a halt. Schools and courts of law were closed, the army rested and no criminals were executed.

Instead of all of that, Romans spent Saturnalia gambling, singing, playing music, feasting, socializing and giving gifts to one another. It was a time of role reversal where Roman masters feasted with slaves who were given the freedom to do and say what they liked.

In many households, a mock king was chosen. It was usually a lowlier member of the household crowned Saturnalicius princeps or “leader of Saturnalia.” This person was chosen through the hiding of coins in cakes and often called the Lord of Misrule.

They were also responsible for making mischief during the celebrations — insulting guests, wearing crazy clothing and much more.

Today in our area you can find a number of communities and celebrations about the return of the sun and our longer, lighter days.

Check out an upcoming winter solstice program and start your own traditions this year! 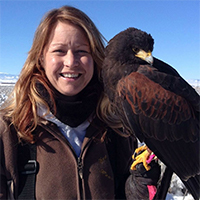 Michelle Bierma is an Interpretive Naturalist at Mississippi Gateway Regional Park. She helps people learn about and connect to nature through classes and great adventures. She earned a Bachelor of Science degree in Biology from the University of Minnesota and has been a naturalist ever since. When not at work, she spends time practicing the sport of falconry, loving that it allows her to be a part of the predator/prey relationship in nature and the opportunity to learn about the birds, their prey and the natural communities they call home. You might also find her hiking trails, making jewelry or watching some hometown football. 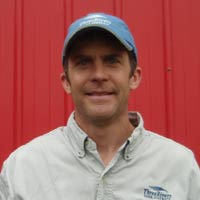 Discover how constellations can be "signs of the season" and find origin tales of the Pleiades constellation, also known as the Seven Sisters, from ancient Greek, Australian, and Indigenous cultures.