The fire burned low to the ground, crackling as it slowly ate its way through the dried leaves, grasses and twigs that covered the prairie at Crow-Hassan Park Reserve. I shielded my face as the wind kicked up ash, soot and smoke. While the flames crept past me, a command over the radio reminded me of my afternoon duties.

“Erin, keep going until you hit that elm tree,” said Burn Boss Brian Fredlund. I picked up my torch, dipped the end in the burning grasses until it caught and dragged it down the west side of the unit, starting a new wall of flames that began to work its way toward the middle of the prairie.

Brian drove his pick-up truck, outfitted with a water tank and hose, slowly past me on the dirt trail, keeping watch. Steven Hogg, Wildlife Supervisor, rode on top of the tank, putting out any threatening embers.

“Hold there, Erin,” the radio ordered. I snuffed out my torch with my gloved hand and waited for further direction.

Why Do We Burn Prairies?

Prairie burns are a sight to see, and to be part of one is an amazing experience. But Three Rivers doesn’t burn for the show. We burn prairies (and occasionally woodlands) because it helps keep them healthy so they can support important plants and wildlife.

Steven explained to me that invasive species can quickly out-grow native plants in the spring, blocking the light they need to thrive. Burning knocks back these invasives and some woody bushes and trees that managed to creep in, giving the plants that belong on the prairie time to emerge in full sunlight.

Burning also helps stimulate growth of new plants. Over time, dead plant material accumulates on the prairie. Burning it helps that material decompose faster, returning nitrogen and other important nutrients to the ground. The black layer of char and ash absorbs more of the sun’s light, warming the ground and helping seeds germinate.

Creating these large open spaces free of shade-producing plants is crucial to the survival of a prairie – and much of the wildlife that lives in it. The more plants a prairie has, the more wildlife it can support. Without direct sunlight, many prairie plants would struggle to thrive.

You can see this for yourself. Visit Crow-Hassan Park Reserve and take note of a shady spot on the edge of the prairie. If you look carefully, you’ll see the plants in the shade are different from those in the sun. Fewer can survive there.

How Do Prairie Plants Survive Fire?

Unlike many other plants, prairie plants are extremely well-adapted to dry conditions and fire. Two adaptations are especially helpful in protecting them from the fatal damage in fire:

In other words, their most important parts live underground where the flames can’t reach.

What About the Wildlife?

When I learned about prairie burns, one of my first questions was, “What about the animals?” I was concerned about how they would survive a burn. As it turns out, they’re fairly well-adapted, too.

Natural Resources staff intentionally burn in the spring because many animals (like birds and turtles) haven’t nested yet. They are especially careful to avoid nesting season for threatened or vulnerable species like Blanding’s turtles.

Because the fire is mostly slow-moving, any birds in the area can fly away. Other critters like snakes and ground squirrels can duck into their holes and be safe as the fire moves over them. If burn crew members see an animal heading the wrong way, they’ll attempt to grab it or shoo it toward safety.

Inevitably, some animals and insects do not make it out, but it’s all about balance.

Three Rivers never burns an entire prairie in one year. Instead, each prairie is divided into units of land that are burned roughly once every five years. Burning a few small pieces of land at a time in strategic locations limits any negative impact on wildlife. This approach also creates several micro-environments that benefit a wide variety of wildlife.

“Killdeer and sandhill cranes actually prefer the freshly burned prairie,” said Steven. Others prefer thatch – the layer of dead plants on a prairie that hasn’t been burned in a while. Other species, like grasshopper sparrows, prefer tall grasses. By not burning everything at once, we ensure there’s something for everyone.

Safe Burns Are a Team Effort

A fire needs two things to keep burning: oxygen and fuel. A controlled burn is a huge coordinated effort to keep a moving fire from finding fuel or oxygen somewhere other than intended.

At the beginning of the last burn of the day, the team of nine huddled together to go over the plan. Burn Boss Brian assigned roles: torch carriers, hose operators and drivers. They went over how much water they had left and how much fuel was in their trucks. Everyone had a radio strapped to their chest. 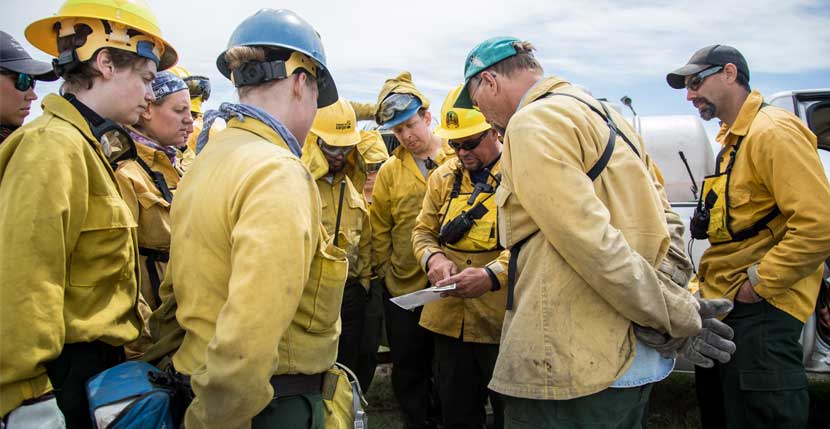 When the huddle broke and everyone was in position, the water line went out first. Emma drove the truck, while Andrea sprayed water just in front of the back tire, helping it soak into the soil. The water line is sprayed downwind of the fire. It creates a soggy buffer that keeps the flames from going in the wrong direction.

After the water line got a head start, Brian radioed to Andrew giving him the go ahead to start the back fire. 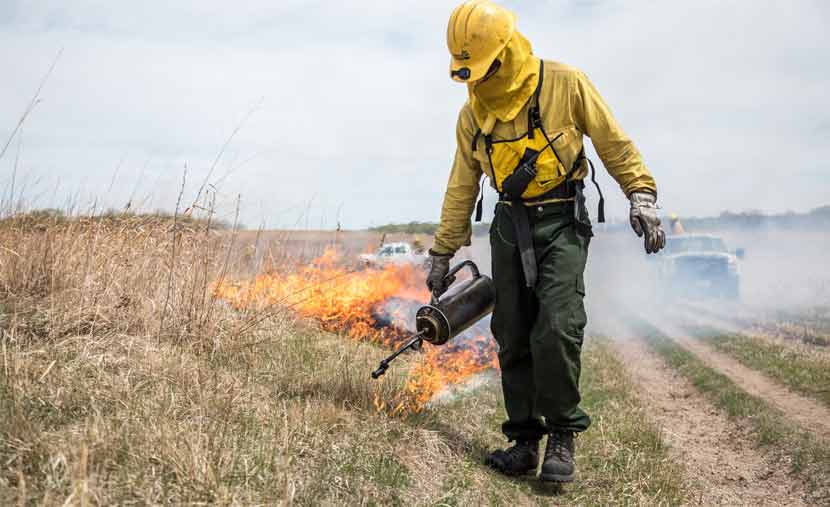 The back fire is lit against the wind, which keeps it moving slowly. Eventually, the torch carriers light the adjacent sides, which is where I came in. The idea is to keep the fire moving toward the center of the prairie unit.

As the back and side fires burned slowly against the wind, the water trucks patrolled, soaking certain spots to create a break that the fire couldn’t cross and making sure no embers had been blown into nearby units. 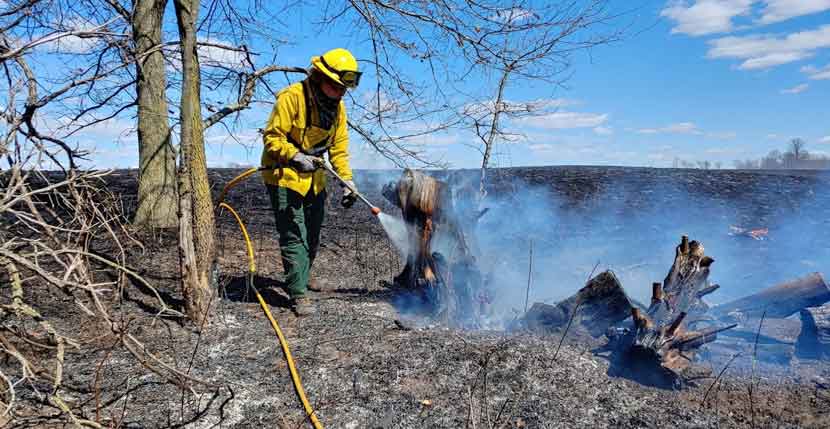 As I stood near the top of a gentle slope toward the back end of the prairie unit, the torch felt heavy in my hand. It had been about an hour since Andrew lit the back fire. We were waiting for a safe buffer of burned ground before lighting the head fire.

Once the head fire was lit, the wind would sweep it toward the center. The whole thing would be over in less than 10 minutes.

Finally, I got the call. “Erin, go ahead with the torch.” As I continued down the slope and up and around the final portion of the prairie, the fire was different. It was bigger and faster. I felt the wind change and the heat intensify as the flames from all four sides of the prairie worked their way toward the middle under a giant cloud of smoke and ash. After they met with a dramatic finish of flames and smoke, the fire was out. It was over.

Bringing Prairies to Life with Fire

Prairies would not exist without some type of management. Centuries ago, bison took care of it by grazing and trampling on the prairies. American Indians recognized the importance of the prairie as hunting ground, using fire to maintain these open spaces.

Today, there is no naturally occurring prairie management system. At restored prairies like the one at Crow-Hassan, controlled burns maintain the important open space and stimulate new growth. Without doing something to keep invasive and woody plants at bay, the few remaining prairies we have in Minnesota would slowly become forests.

If you visit a prairie shortly after a burn, you’ll see a large swath of charred land that looks desolate and dead. Return in a week, however, and you’ll start to see new life emerging.

In two, three, four weeks, you’ll be greeted by native grasses and flowers standing tall and proud in the sun. Busy bees will zip past you and a rainbow of butterflies will float by. You’ll walk to the tune of bird melodies you wouldn’t hear without this space.

Take note of it all and soak in the experience. You’ll quickly feel the power and importance of the prairie.

Planning for a Prescribed Burn

It takes months of planning and preparation to conduct a controlled prairie or woodland burn. As our Natural Resources staff plans for next year's burns, read on to learn about all of the steps they take before ever lighting a fire.

What Happens To Collected Prairie Seeds?

Getting collected seeds back onto the prairie is not as simple as you might think. Learn what goes on between seed collection and seed planting.