“All future generations must understand their role in the stewardship and caring for the environment and the land. It is the most precious heritage we can give them.” - Goodrich Lowry

Goodrich Lowry was pursuing his interests in conservation, birding and travel after retiring from Northwest Bancorporation. He joined the board of the National Audubon Society and served as its director. This affiliation prompted his interest in nature centers, and he became interested in championing an outdoor education facility in the Twin Cities for school children with the purpose of enhancing their affection for and their desire to protect their natural environment.

In January 1967, Lowry approached leaders in the education and conservation communities regarding his vision. Greeted with enthusiasm for the project, Lowry assembled a core group of individuals to help make his vision a reality. This group became Metropolitan Nature Centers, Inc., a nonprofit organization dedicated to raising funds to build, staff, and operate the first public nature center in the Twin Cities.

In just two years, Goodrich and Metropolitan Nature Centers, Inc., raised over $500,000 to build and fund two years of operating costs for Carver Park Nature Center, which opened in the spring of 1969.

FAST FACTS ABOUT THE BUILDING

In 1971, operations were turned over to Hennepin County Park Reserve District (now Three Rivers Park District), and in September 1974, Carver Park Nature Center was renamed Lowry Nature Center in recognition of the work of Goodrich Lowry.

Metropolitan Nature Centers, Inc., went on to fund the construction of two additional nature centers: Richardson Nature Center and Eastman Nature Center. In 1973, board members decided their goals had been accomplished. The nonprofit was liquidated and remaining assets were given to what is now Three Rivers Park District.

But the dream was never just about the building. The building was a gathering space.

“These children will be our voters of tomorrow, setting the conservation policies of this state and nation.” - Goodrich Lowry in 1967, explaining the importance of nature centers.

The mission of Three Rivers Park District, written in the early 1980s, was influenced by Goodrich Lowry:

To promote environmental stewardship through recreation and education in a natural resource-based park system.

If it were not for Lowry’s action in creating Metropolitan Nature Centers, Inc., and raising funds that ultimately led to the construction of not only Lowry Nature Center but also Richardson Nature Center and Eastman Nature Center, our organizational focus on outdoor education may not be the same.

In 2019, Lowry Nature Center celebrates 50 years. Watch for special events throughout the year, plus future blog posts on the legacy from the past 50 years and dreams for the next 50! 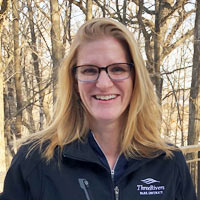