The history and complicated relationship between birds and humans is best highlighted by the purple martin. Even as we are responsible for the birds’ troubles (pesticides, habitat loss and climate change), we are also responsible for their survival.

Unlike many native birds, the purple martin thrives near humans. They also thrive at a Three Rivers park near you!

A Bit About Purple Martins

Purple martins are the largest of North American swallows. They are long-distance migrants, flying 6,000 to 13,700 miles annually between North and South America.

In the early fall, they form large, noisy flocks that number into the hundreds of thousands. These flocks can be big enough to detect by radar. They roost and migrate together as they make their way to Brazil for the winter. Martins begin returning to Minnesota in late April to breed.

Martins’ diets consist entirely of flying insects. Efforts to attract these social birds were believed to be motivated by this very fact. They were often advertised as being a solution for mosquito control. It is a myth, however, that Martins consume great numbers of mosquitoes. Instead, they seem to prefer larger insects such as dragonflies.

Relying on Humans for Housing

Due to habitat loss and other human-caused factors, these colonial nesters now depend almost entirely on human-made structures for nesting east of the Rocky Mountains.

Several generations ago, many Minnesota farmers maintained thriving martin colonies on their farms. With the move away from family-run farms, however, many martin colonies were abandoned. Their numbers have been declining steadily in the Upper Midwest.

Three Rivers first attempted attracting purple martins in 2004 at the Baker Campground beach on Lake Independence. That year, we attracted four pairs to a martin house, but no young were fledged. This was likely due to the summer’s unusually cool weather and limited insect prey.

In 2005, martin houses were set up at two additional locations: one along the shore at Noerenberg Gardens and another at Eagle Lake Golf Course. The Eagle Lake site immediately attracted martins.

In 2006, due to tree plantings (martins prefer a wide flight path to their house), the martin house at Lake Independence was moved to the Baker National Golf Course. Martins were attracted to this new site in 2007, but the non-native house sparrow caused troubles for the colony, and only three martin nests were active.

The house at Noerenberg Gardens was moved to the swimming beach at French Regional Park where the site could be kept free of trees.

In 2010, we re-installed a sixth martin house at Noerenberg Gardens in hopes of attracting martins that were seen nearby. It was not until 2016, however, that it became clear martins were attracted to this location. That year, a nesting pair successfully laid eggs but failed to fledge young.

In 2020, the Noerenberg Gardens location had two successful nesting pairs – a promising sign. Time will tell if this colony can grow and become established. Once a colony successfully fledges young, the young and adults will return faithfully to their colony.

Starting in 2008, we were lucky to gain a few volunteers to help observe the colonies more closely. This was the turning point for greater success.

Along with having new dedicated volunteers to assist, Three Rivers joined the Minnesota Purple Martin Working Group where the exchange of knowledge and expertise further supported achievement. This led to weekly nest checks and submitting observations of eggs laid, hatched and fledged, to the Purple Martin Conservation Association. 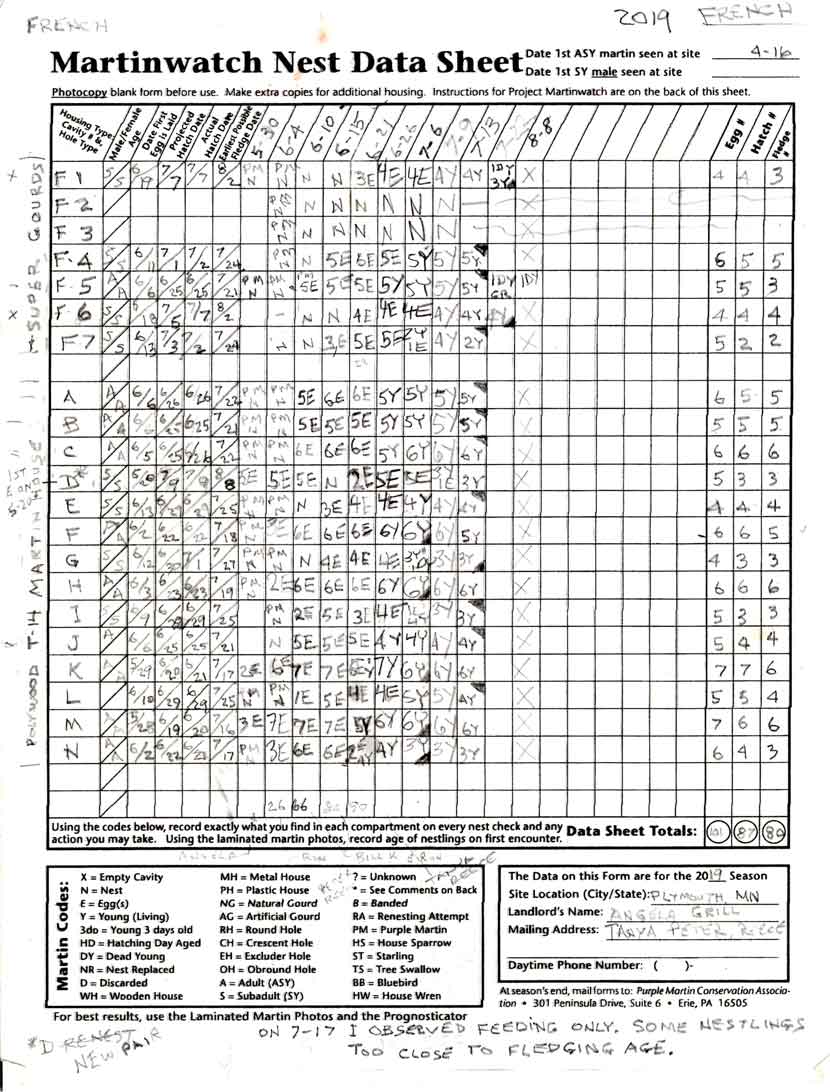 Volunteer support allows for close monitoring and through the years has allowed us to expanded to a total of five active sites at Eagle Lake Youth Golf Center, Baker National Golf Course, French Regional Park, Cedar Lake Farm Regional Park (installed 2014) and Gale Woods Farm (installed 2016). Most sites have grown to include additional housing and gourds.

How Are the Martins Doing Today?

We have come a long way since the beginning of our purple martin efforts. In 2009, we recorded 59 fledged martin chicks. In 2020, 377 chicks fledged – our most successful year ever! It may have taken several years and a sharp learning curve, but Three Rivers and our volunteers will be contributing many new purple martins for the foreseeable future.

When To See Purple Martins

If you are interested in viewing these chirpy social birds, visit any of the five established colonies from May through July.

Did you know there was a time when turkeys didn't exist in Minnesota? Learn all about this Thanksgiving staple, including how they came to thrive in our area and what to do if they're causing trouble in your yard.