Skip to main content
All buildings are closed; no restrooms or drinking water available. Programs, events and reservations canceled through May 4. Parks and trails remain open. Some trails may be affected by weather; be sure to check trail conditions.

On a bright Friday afternoon, Gale Woods Farm is quiet; there aren’t any school groups and the excitement from the harvest has settled. Winter is coming, and while most of the critters are well suited for the cold, some didn’t make it past Thanksgiving. Farm Supervisor Tim Reese gives me a tour and explains how the farm animals fare in our Minnesota winters.

On our way to see the sheep, we first meet Delilah, a great Pyrenees dog lazing in the sun. She and her son, Orion, protect the farm’s sheep by warding off coyotes and other predators with their deep bark. Bred to protect flocks in the Pyrenees Mountains of France and Spain, great Pyrenees dogs thrive in the snow and cold.

The 20 breeding ewes and three mature rams are Finnish Landrace, or Finnsheep. Although some of the flock was shorn in early October, their wool grew back quickly and helps maintain their body heat throughout the winter. The sheep produce natural oils that repel moisture so snow and ice do not matt and freeze in their wool. The Finnsheep are in the pasture during the day in the winter, until lambing season begins in late March and about 50 lambs are born.

The cattle are also out in the pasture, munching on grass and hay. Nine calves with beautiful dark, brown eyes and long eyelashes were born this fall to cows ranging from two to eight years old. Originating in the highlands of Scotland, Galloway cattle are used to the cold and can stay out on pasture with minimal shelter through the winter. The calves have thick, coarse outer coats that protect them from the elements, and the cows have low nutritional needs and can easily nurse calves during the winter. The steers grow to market weight of around 800 pounds in 20-24 months on a 100% grass-based diet.

Next we visit Clover, a sassy Jersey dairy cow who lets farm visitors milk her when she is in a good mood. She has been dried up for the winter and won’t be milked again until spring when she has a calf. Clover lives outside during much of the winter but has access to the barn during the coldest days.

There are two groups of chickens at the farm. Two-year-old chickens spend their spring, summer and fall roaming the pastures in a mobile coop managing flies and other pests attracted to cow manure. However, their egg-laying rate slows down when they are two years old so they are sold before winter hits. Younger hens spend their winter indoors in the unheated coop. The chicken breeds at the farm are chosen for their cold weather resilience, like the Brahma chicken which has a short comb that won’t freeze and feathered feet that prevent frostbite.

The turkeys and pigs are not at Gale Woods Farm during the winter. The turkeys ended up as holiday meals, and the pigs went to market in late November when they were eight months old. Newly bred sows will arrive in March and their litters will head out to pasture in June.

Tim ends the tour by explaining how agriculture is uniquely tied to the effects of a changing climate. A lot of critters at Gale Woods Farm prefer the winter. Consistent cold is easier on the animals, while the unpredictable warmings and cold snaps we’ve seen in recent years are harder to adjust to. In addition, a cold winter helps kill off internal sheep parasites which spend part of their lifecycle on pasture.

Visit the Animals this winter

Get some fresh, winter air and see how the animals are faring! Maybe you can spot the sheep or cattle on a stroll along the trails, or visit the barn animals during select public programs and events. 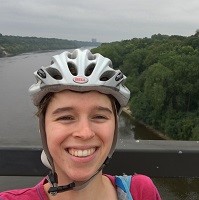 Jane Carlson recently completed a Big Woods, Big Rivers Master Naturalist course at Coon Rapids Dam Regional Park (becoming Mississippi Gateway Regional Park). She graduated from Grinnell College with a degree in anthropology and now lives in Minneapolis. Jane loves biking and running along the Mississippi and is considering getting into birding.

Farming and Environmental Stewardship: The Story of Gale Woods Farm

Gale Woods Farm is a unique part of Three Rivers Park District. Learn how the farm came to be and how farming and environmental stewardship go hand-in-hand.

Why September Is Sweeter at the Farm Market

Early fall is peak harvest time in Minnesota. Learn why some vegetables taste sweeter later in the season, how to store them during winter, and when to stop by Gale Woods Farm in Three Rivers to stock up on the season's bounty.