Why and How We Survey Bumblebees at Three Rivers

May is the perfect time to watch for pollinator royalty: the queen bumblebee. The timing of her awakening from a winter slumber coincides nicely with the blooming of the bright yellow pinwheel-shaped flowers of a prairie favorite: wood betony. This gives me an early opportunity to check in on local bumblebee diversity within the restored prairies of Crow-Hassan Park Reserve.

Throughout the following summer months, these queens establish colonies by raising female worker bumblebees. These beloved pollinators are social insects, which means that many individuals live together to form a colony. Trips through the fields of endless prairie flowers showcase these fuzzy bees busy at work collecting pollen and nectar. You can learn more on their fascinating life cycles and biology in contrast to the popular European honeybee in a past blog post. 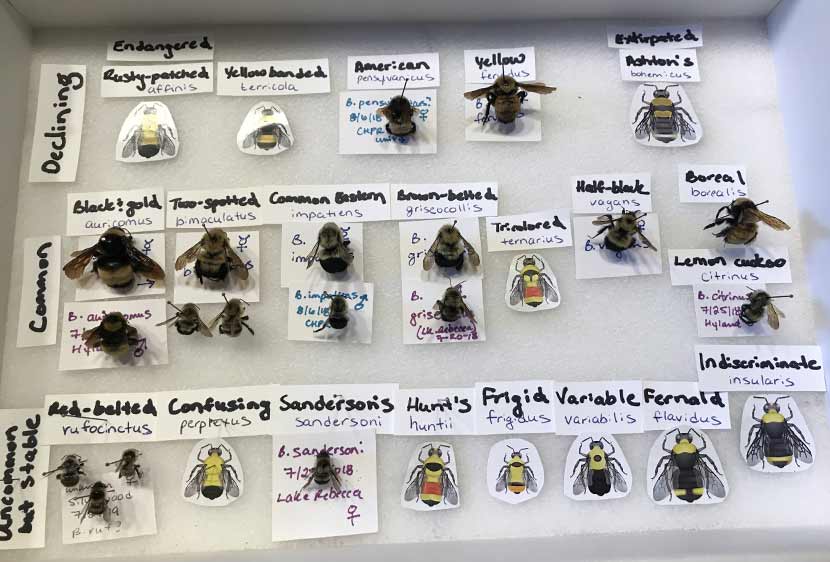 There are about 20,000 bee species worldwide and approximately 400 species of native bees in Minnesota, including 23 bumblebee species. The rusty patched bumblebee, Bombus affinis, became Minnesota’s state bee in 2019. Why all this focus and special attention? To raise awareness about the role of pollinators in Minnesota’s ecosystems and the importance of their conservation.

The rusty patched bumblebee was once widespread in the Eastern United States, but now it is found in just a fraction of its former range. Since 2017, it has been listed as an endangered species under the U.S. Endangered Species Act. Many bumblebee species are declining in population and experiencing reductions in their geographic ranges. Threats to pollinators can include habitat loss, climate change, pesticides and pests and pathogens.

Why We Survey Bumblebees

Surveys that take place across Minnesota give us a snapshot of bumblebee populations. The information collected becomes part of the Minnesota Bee Atlas, a citizen science project funded by the Environment and Natural Resources Trust Fund (ENRTF) that maps the diversity and distribution of wild bees in Minnesota. At Three Rivers we participate in these efforts and conduct our own intensive bumblebee surveys at various park locations, focusing on restored prairies.

In about mid to late July, bumblebee survey season starts in the Twin Cities metro area. This is when most species have reached their peak population. Target flowers to watch include hyssop, Joe-pye-weed and bergamot. Bombus impatiens, a common bumblebee species found here in the Twin Cities area, typically has 200 to 500 workers in a colony at its peak.

How We Survey Bumblebees

At Three Rivers, our Wildlife staff tote a survey bag filled with all the necessary equipment: clear plastic cups, nontoxic marking pens, hand lens, insect net, federal permit (required) and most importantly identification guides. Confirming which species you have collected can be difficult; it takes patience and a lot of experience. The federal permit is a requirement to physically handle any bumble bee species within the range of B. affinis.

Survey methods include swift and safe capture of each bumble bee into clear plastic cups as well as tracking which flower they were collected from. To ensure the safety of each participating bumblebee, the cups are vented with small holes and kept in the shade. If needed, a cooler is kept on hand if temperatures get too warm. 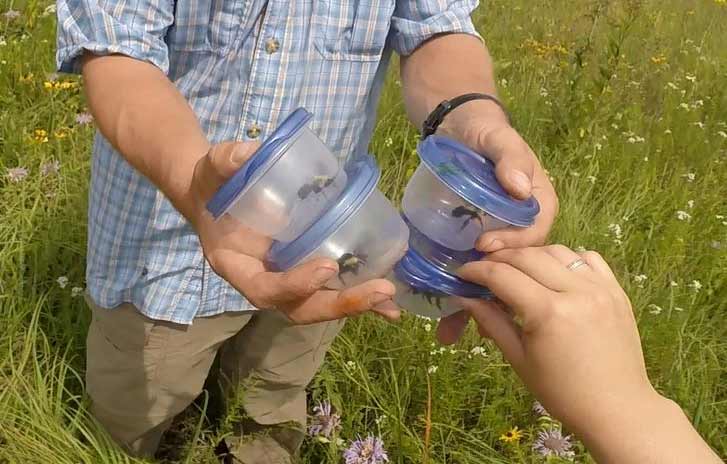 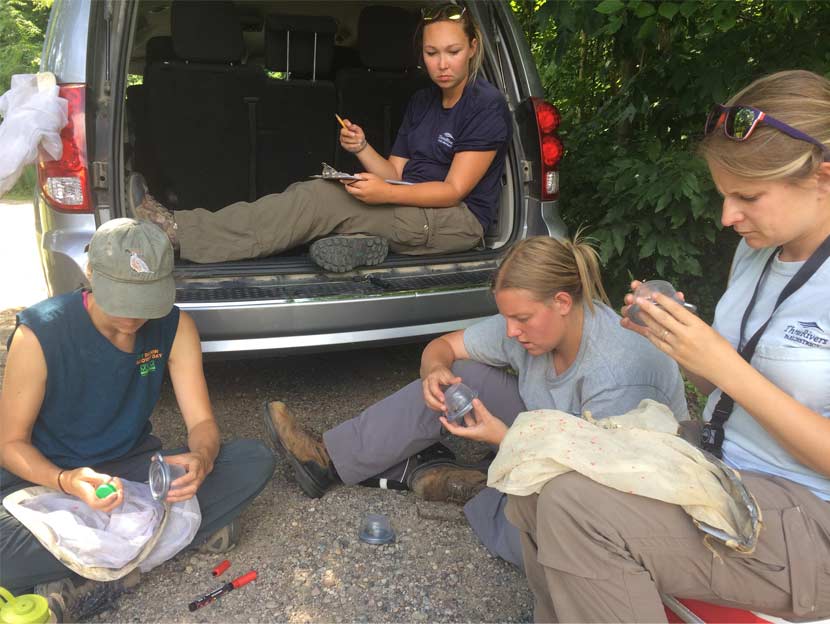 Most of the bees we capture are female worker bees. Because they are so focused on their task of gathering copious amounts of food, they are easier to sneak up on and slowly clasp a cup around. We are always gentle when capturing a bee to ensure it flies upwards into the top of the cup.

Each surveyor then returns with their buzzing cup to allow the wildlife biologist time to identify and record on field data sheets. After each bee is processed for recording, they are released into an insect net to receive a small dot of colored nontoxic paint on their thorax. This helps ensure they are not recaptured and counted twice.

How We Use The Data

We submit our survey information to local experts at the University of Minnesota and to the U.S. Fish and Wildlife Service. These quantitative surveys tell us not only which bumblebees are where, but also which bumblebees are declining in abundance. They are very important in helping us document the status of Minnesota bumble bees. Minnesota is too big for the handful of bee biologists working in the state to reach all areas. With the various habitat restoration taking place within Three Rivers, surveys also help us gauge the diversity and resiliency of our efforts.

We must continue to learn more about where these bumblebees live so we can provide them with what they need to survive in our parks and make better recommendations for landowners and other property managers.

How You Can Help Bumble Bees

Volunteer citizen scientists like you can help document bumblebee observations. Check out applications such as iNaturalist, SEEK, Minnesota Bee Atlas and Bumble Bee Watch to report bumble bee sightings by submitting photos. Experts will review your photos and verify identification and record the location.

The next time you hear the popular children song about bringing home a baby bumblebee, hopefully you will be reminded of the significance of this fuzzy pollinator. Please refrain from squishing any of our friendly pollinators and instead help raise awareness of their importance in our ecosystem.

Honeybees, Bumblebees and the Case of the Collapsing Hive

Did you know there are nearly 20,000 known bee species in the world? Nearly 4,000 bees are found in North America, and roughly 400 of those species call Minnesota home. Read on to dip your toe in the water with two well-known groups: honeybees and bumblebees.

Camera Trapping: A New Way to Survey in Three Rivers

Camera trapping, a newer volunteer project in Three Rivers, provides the wildlife department with useful information about the kinds of animals found in the parks. Learn more about camera trapping and see what's been caught on film!