What Does it Take to Build a Mountain Bike Trail?

You focus on the narrow strip of dirt trail in front of you, your bike tires gripping the earth as trees blur past. The trail flows over the land’s natural contours, twists and turns past trees, boulders and stream beds.

At times during your ride, it might seem as though the trail is a product of human use, similar to a path worn into the grass by hikers and joggers.

In reality, the trail is the result of a careful process that involves Three Rivers staff, partner organizations, trail users and the public.

What is a Singletrack Trail?

A Brief History of Singletrack Trails in Three Rivers

How did Three Rivers get to this point of operating more than 30 miles of singletrack trail with another 10 miles scheduled for completion by next summer?

He said in the mid-1980s, people started asking if they could ride mountain bikes in the parks. Following a study, the Park District allowed mountain biking on parks’ existing natural surface trails in the late ‘80s.

That workshop provided staff, including Jay, with a knowledge base about singletrack trail construction, and participants in the workshop built a small demonstration trail at Murphy-Hanrehan.

The First Singletrack Trail In the Parks and Beyond

Another workshop was held in 2005, which included participants marking the rough outline of beginner- and intermediate-level trail loops. Three Rivers applied for and received a Regional Recreational Trails grant from the Minnesota Department of Natural Resources which funded half the project costs; the Park District and MORC funded the rest.

The Murphy-Hanrehan trail opened in 2007 to positive reviews and immediate popularity within the mountain biking community. Before long, mountain bikers began asking when and where Three Rivers would build another trail.

Jay said the Park District’s first consideration when choosing a park for a trail is achieving geographic balance throughout the Three Rivers system. Murphy-Hanrehan is located in Scott County in the south metro; the second singletrack trail was built at Elm Creek Park Reserve in northern Hennepin County; and the third trail was built at Lake Rebecca Park Reserve on the western edge of Hennepin County.

Grant funding has been integral to each of the three trails that are open, and the Carver trail project presented a unique opportunity of its own.

The Park District was approached by representatives from the One Track Mind Foundation about funding a singletrack trail at Carver.

Three Rivers Park District Board of Commissioners supported the relationship with the One Track Mind Foundation with the goal of planning, designing and constructing a new trail that is funded by the Foundation.

Before any other steps in the process could take place, staff had to identify a potential location for the trail within the park.

“It’s more challenging than you’d think,” Jay said. He explained that he consults with staff across Park District departments to identify concerns about natural and cultural resources as well as existing park uses. Goals of the process were to design and build a trail that minimized impacts to the park's natural resources and to other park uses.

“We’re trying to make a minimum impact on existing features,” he added.

At Carver, staff identified an area in the western part of the park as a good candidate for the new trail. At that point, staff wanted to learn more about the public’s thoughts about the potential trail location, so they developed an online survey that sought park users’ opinions on potential challenges and opportunities.

By asking survey participants to identify the activity they take part in the most at Carver, staff could ensure they were hearing from horse riders, Nordic skiers and archers as well as mountain bikers.

The survey was posted on Let’s Talk Three Rivers, the Park District’s online engagement website. In approximately two weeks, more than 900 people responded to the survey.

This spring, Park District staff, a representative from the One Track Mind Foundation, and the design consultant spent a few days walking the site and sketching the preliminary trail location.

“Ideally, we’re trying to come up with a trail that minimizes impacts to other park users, natural resources, and meets sustainable standards — as erosion-free and maintenance-free as possible,” Jay explained.

The rough trail sketch from the field was refined into a map showing the draft trail design. Staff sought public input about the draft design both through the online engagement site and at a public open house held at Carver Park in June.

Overwhelmingly, comments received supported the design and offered suggested improvements to specific trail areas. Based on feedback received, modifications were made to the trail alignment to minimize impacts to other park users such as horseback riders, walkers and skiers.

The newest singletrack trail will feature large loops that flow with the natural landscape. Most of the trail will be intended for intermediate-level mountain bikers, with some beginning and advanced trails.

The trail will include some challenging features, and Jay explained that singletrack trails continue to evolve over time, including the addition of advanced trail features that are options for trail riders who choose to navigate them. For instance, picture a short trail segment splitting off from the main trail that includes partially buried logs or rocks to ride over.

Construction is currently taking place on the new Carver trail; visit the Carver Singletrack Trail page for project updates. Learn more about mountain biking in Three Rivers and ride a trail near you. 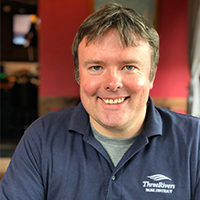 Jason McGrew-King is the Intergovernmental Relations and Communications Supervisor at Three Rivers. He graduated from the University of Minnesota with a Bachelor of Arts in Journalism and from Hamline University with a Master’s in Public Administration. He first worked for the Park District as a seasonal employee at Baker National Golf Course in the mid-1990s, and after working for community newspapers for nearly a decade, joined the Park District full time in 2007. When not working, Jason enjoys spending time with his wife cooking, hiking, photographing nature, trying new restaurants, attending concerts and theater performances, and cheering for Wisconsin sports teams.

Tips and Tricks for Winter Biking

There are countless barriers (both perceived and actual) that prevent people from biking in the winter, but ultimately most of us already have much of the gear that makes winter biking comfortable, practical, fun, and safe. Learn some tips to overcome winter conditions and make winter biking seem less daunting.

My Top 5 Reasons to Bike Commute Year-round (Yes, Even in Winter)

The arrival of winter is often associated with a decrease in the amount of time spent being active outside. Learn five reasons why you should consider bike commuting as a way to spend more time outdoors and embrace our coldest season.

The Rewards and Challenges of #30DaysofBiking

Could you ride your bike every day for 30 days straight? Learn about the joys and perils of biking daily in April in Minnesota in this firsthand account, then make a pledge to join #30daysofbiking.