Every year, as soon as I put on sunscreen and the smell of it hits my nose, a life’s worth of summer memories flood into my consciousness — memories of swimming in lakes, hunting for rocks by the river, canoe rides, playing in the woods, scraped knees.

I even remember exclamations from my mother along the lines of, “How are you capable of getting this dirty in one day?!”

Most of all I remember the sense of freedom summer gave me as a child — to explore and adventure in the outdoor world around me. As a naturalist, I am lucky in that nothing much has changed in my summers, although perhaps now I’m the one wondering how it is I can get myself that dirty in one day.

These balmy, sticky summer nights have become my favorite; partially because of the relief it gives from the hot days spent in the sun and also because I’m now old enough to stay up late and see the stars come out.

Of course, I know that stars are out all year, and actually appear much earlier in the wintertime, but even as a naturalist, sitting outside on a cold winter’s night isn’t super high on my list of things to do.

My interest in the stars has increased considerably in the past year with the new StarLab that Three Rivers Park District invested in for programming. As a part of the Outdoor Education and Recreation team for Three Rivers, it is my job to teach programs using the StarLab, and I could not be more excited.

Something I’ve learned, even in the few programs I’ve led so far, is that people are just as interested as I am in hearing the stories of the stars.

Here’s just a snippet of some of the things I’ve learned and a few of my favorite star stories.

What is a Constellation?

First things first: What exactly is a constellation?

According to NASA, a constellation is a group of stars that forms a particular shape in the sky and has been given a name. That shape, of course, is up for interpretation depending on the culture.

Officially, science uses the Greek and Roman names, shapes, and stories to identify constellations. A few of the constellations you are likely to know are the ones we see all year, or circumpolar constellations, which include:

Circumpolar constellations are tightly packed around the North Star and never fully dip below the horizon, meaning the Southern Hemisphere never sees them.

One of my favorite constellations, the Pleaides, is actually not a summer constellation. When the Pleiades begins to show in our Northern Hemisphere skies, that means winter is fast approaching. And when it begins to leave our skies, it means a warming of the season is coming and summer is just around the corner. So saying goodbye is one of those "signs of the season" for me.

The Pleiades, also known as Seven Sisters, is made up of seven stars closely packed together. But it is not a typical constellation in that it doesn't create an image; there is no hidden bear or human form like one might see in Ursa Major or Orion.

Stories of the Pleiades

The most interesting part of the Pleiades for me are the stories associated with the constellation.

Since the Pleiades can be seen all over the world and is such a unique cluster of stars in the sky, many different cultures have created stories about it. The stories have this curious way of being both simultaneously as diverse as the cultures they come from and incredibly similar to each other.

The Pleiades in Greek Mythology

The Pleiades, like all of our constellations, gets its name from the ancient Greeks. As told in many of the Greek mythology stories, the Pleiades are seven sisters born to the Titan Atlas (the guy who holds the world on his shoulders) and Pleione, an Oceanid nymph, or divine water spirit.

Of these seven sisters, six of them consorted with the gods — three with Zeus, two with Poseidon, and one with Ares — and they all had famous children, or those children sired famous Greek heroes.

Because of this, the gods placed them in the sky. The seventh sister, however, consorted with a mortal, Sisyphus. The gods took pity on that seventh sister and allowed her to be with her sisters in the sky, but because she married a mortal, they made her star the faintest of them all.

Another Greek story tells that the seven sisters were companions of Artemis, the goddess of hunting and wilderness. One day they were spotted by Orion, who greatly desired them and started to chase after them. The sisters, who did not wish to have Orion’s attentions, begged and pleaded with the gods to stop him. The gods took pity on them and put them in the sky. Orion, however, was placed among the stars for other reasons and he can still be seen chasing them through the sky, never able to catch them. (Source: Star Myths of the Greeks and Romans: A Sourcebook by Theony Condos.)

The Pleiades in Australian Aboriginal Culture

On the other side of the world, an Australian Aboriginal tale also consists of seven sisters. These sisters, also known as the Karatgurk, were spirits who roamed the earth and guarded a highly sought after secret: fire.

They each carried with them a digging stick that had a coal on the top. Many wanted their secret, but the sisters would never share their coals. One day, Crow decided that enough was enough, and he would take it from them.

Through a series of tricks and immense cunning, he was able to get a hold of the coals and the sisters chased after him. When Crow was safely away, all the other animals demanded he share.

An altercation followed and the coals flew out of Crow’s grip, resulting in his feathers charring, and a fire that raged across the Australian landscape.

Because their secret could no longer be contained, the Karatgurk were swept up into the sky, and the burning ends of their digging sticks can still be seen as the Pleiades constellation. (Source: Star Stories: Constellation Tales from Around the World by Anita Ganeri.)

The Pleiades in the Americas

In the Americas, many indigenous groups also tell of the constellation as a group of women.

Symbol of the Season

All over the world the Pleiades are considered a symbol of the season and told as a moral story, a tale of warning, an account of how things came to be, or simply just some juicy drama. When you start to look into them, you’ll find most constellations are explained like this.

Being a city dweller, with light to guide every path I could wish to walk, and light pollution interrupting the wild expanse of stars I know is up there, I often have a hard time imagining a world where there is utter darkness and all the stars in the sky are visible.

Yet still, I feel the wonder of looking up at the night sky, and I hear the stories of the stars I’ve learned speak to me when I look up at them. I can only imagine what it must have been like when these stories came to be.

Interested in learning more star stories? Register for an upcoming astronomy program and experience the night sky from inside the StarLab. 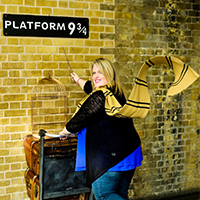 Ashley Smith grew up swimming, climbing trees, and fighting dragons at Lebanon Hills Regional Park in Eagan. With a clear love of teaching and the outdoors, she majored in biology at Concordia College and continued on to Melbourne, Australia where she earned her Master's degree in environmental education. She has since spent the last 10 years working as an interpretive naturalist at various nature centers around the Twin Cities and in greater Minnesota before landing at Mississippi Gateway Regional Park. When not playing (working) outside with people of all ages, she enjoys spending time with friends and family, getting out on/in the water, learning about geology, and being a Tolkien-loving-Doctor Who-obsessed-D&D-playing nerd.

September's full moon is on Monday, September 24. Learn how the Harvest Moon this month is unique from other moons.

6 Ways to Spend an Evening in the Parks

When the sun is starting to fade over the horizon, it could be the beginning of a great, new adventure. Skip the sunburn, beat the crowds and enjoy a magical part of the day by visiting the parks in the evening or at night.

Being outdoors with your special someone or best friend is a great way to spend time together — and it's usually free. Read on to get some outdoor date ideas.