If you are someone who is familiar with this tree, chances are you are someone who doesn’t like this tree. Cottonwood trees are known for how messy they are and how intrusive they can be. You name the problem, cottonwood will do it — from the raining of seed in May and June, to the shedding of branches year-round, to the roots that invade sewers or heave pavement. Still cottonwood is a native tree that has its place in the environment and shouldn’t be so easily dismissed.

Nationally, eastern cottonwood is spread far and wide, though as the name implies it is only found on our side of the Rocky Mountains. In Minnesota, while you can encounter it frequently in the southern half of the state, it does become rare the further north you go (and is particularly rare in the Arrowhead region).

In Three Rivers it is most readily seen within river or stream floodplains or seasonally wet areas (though it doesn’t like year-round standing water). You may also (rarely) see it in our picnic areas and other active-use areas as a shade tree, especially in areas that are chronically wet. I can’t think of a single Three Rivers park that doesn't have cottonwood trees.

Cottonwood trees grow fast – usually about 4-5 feet per year. When conditions are just right, they can grow up to eight feet in a year. On good sites with adequate soil moisture this tree can top out around 190 feet tall and 4-6 feet (yes, feet) in diameter. All of this makes the eastern cottonwood one of the tallest trees this side of the Pecos, and definitely the fastest growing.

This immensity of sequestered carbon does not, however, come without problems for the built environment. Its shallow roots wreak havoc on nearby sidewalks and trails, not to mention the ability of its roots to find their way into weak points of sewer lines.

Additionally, its fast growth means comparatively weak wood, and this tree is known for frequently shedding branches. Being fast growing means it is also relatively short-lived, typically living only 80-100 years. Add to this the large quantity of cottony seed females trees produce and it’s clear that it is not the ideal tree to have in your front yard (unless your front yard is a floodplain).

The name Populus is Latin for “a community of people,” and probably refers to the planting of this genus of tree near public meeting places during the Roman heyday. Deltoides is a Latin term that basically means triangular, and clearly refers to the shape the leaves.

Everyone has their own way of keying in on certain tree features for identification. For me, the leaves are an easy place to start with cottonwoods. As mentioned above the leaves are broadly triangular, and the leaf base is nearly straight across (90 degrees to the petiole, or stem). The leaf margins have coarse teeth that tend to angle toward the tip of the leaf. The tops of the leaves are dark green and shiny, while underneath they are pale green. 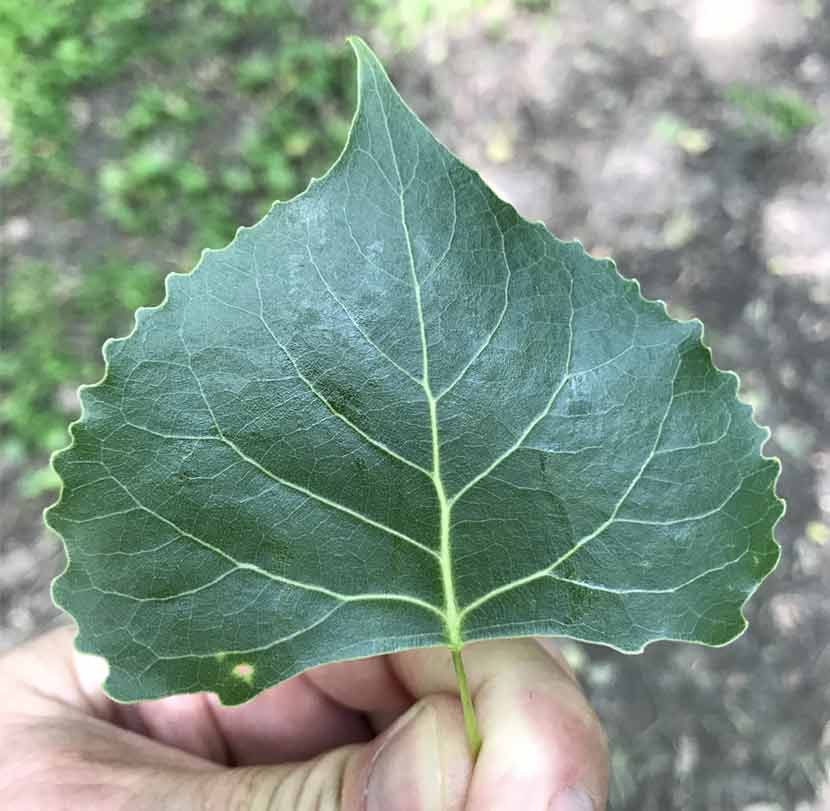 Similar to quaking aspen, the leaf stalks, or petioles, of this tree are flattened allowing the leaves to twist and turn in the wind (though maybe not quite as easily as aspen).

The buds are another telltale sign for me. The buds on eastern cottonwood are large and tend to have a sticky resin present. The only other populus tree with this feature is Balsam poplar (Populus balsamifera), which is common in the northern third of the state but is not widely distributed around here (and is not nearly as large as the eastern cottonwood).

Finally, the bark of young trees starts out fairly smooth and a sort of bronze-gray in color with light dots or lenticels. As cottonwood age, however, the bark quickly becomes thick and turns a grayish-brown with many deep furrows and ridges.

Three Rivers does not propagate cottonwood trees because it usually does a decent enough job of this on its own (often in areas that we do not want it to propagate). As mentioned above, the female trees produce copious quantities of cottony seed just about every spring. You can easily detect the seed wafting through the air starting in May and lasting through mid to late June.

Cottonwood are very intolerant of shade and need bare mineral soil or sediment to germinate and grow effectively. Rivers that flood at the correct time of year, and that carry enough sediment, are ideal locations for cottonwood seed germination.

According to several analyses, there is significant genetic diversity between regional populations of this tree within the United States, however, within each local population genetic diversity appears low. Seed is the main mode of reproduction for this tree, though they do reproduce from root sprouts and can form small clonal stands.

Our main management activities for this tree revolve around keeping it out of (or at least limiting the quantities within) our reforestation plantings. Because of its prolific seeding and fast growth, cottonwood can easily overwhelm a planting site and outcompete more desirable species.

The only planting of cottonwood trees within Three Rivers in recent years has been a small planting at the south end of Mississippi Gateway Regional Park in conjunction with the Mississippi Park Connection. The goal of this project was to assess whether transplanting hand-dug rooted stock was a viable method to address a general lack of regeneration of cottonwood trees within river floodplains. So far, this project appears to have been successful.

There are few commercial uses for eastern cottonwood trees, mostly due to its relatively weak wood. It is used for pallets and the interior of plywood, as well as pulp in the making of lower quality paper products.

In nature, eastern cottonwood is the preferred nesting tree for bald eagles. This is why the lack of cottonwood regeneration is so concerning (though with how many bald eagles we currently have, I wonder if there is a problem here).

The overall importance of eastern cottonwood trees within Minnesota will likely increase as we progress toward a wetter and warmer climate. Suitable habitat will likely improve west of the Twin Cities. This could lead to more cottonwood trees along the western edge of the state and into the Dakotas. In general, we will likely see more of this tree in the future.

Black cherry trees are known for their fruit and valuable, beautiful wood, but there's so much more to these common native trees. Learn how to identify them, which diseases and pests affect them, and how climate change will significantly impact their location in the state.

American hazelnuts are easy to grow, cold-hardy, and offer many benefits to both humans and wildlife. Read on to learn all about this plant that grows throughout Minnesota.