After 10 years of helping organize Trail Mix Race, this was the year I finally had an opportunity to participate in it. Three brave souls and I formed a four-person team to run on the soft trail conditions found in the springtime at Lake Rebecca Park Reserve. Needless to say, the 12.5K trail race was a mud run.

The freeze/thaw cycle hit just about peak and the race happened the week after Minnesota received a two-foot dumping of snow in mid-April. The course was partial snow, mostly mud, and over a foot of standing water in spots.

It took me over an hour and 20 minutes to complete one lap — and I was only doing one! The people running the ultra course had to complete four of these; I’m not sure what type of mindset someone needs to run a 50K in mid-April, but they are a rare breed of people.

All of this aside, there is no place I would rather run than in a local park. We are fortunate to have miles of trails and thousands of acres of land at our doorsteps (or within a few miles of us). Running in a regional park is one way I personally “even out.” I have found that the time outside helps calm my anxieties and the exercise boosts my endorphins. While I will admit it is hard to get started some days, I never regret taking the time to go for a run, and I am a better person for having done so.

It is also a thousand times better than running on the “dreadmill.” Your routes can change as often as you want. At a minimum, your environment will change from day to day with the seasons, and it is fun to see a bare forest turn into lush green shade and then transform into vibrant fall colors. Running in parks and on regional trails has allowed me to encounter many kinds of wildlife, including deer, fox, pheasants, coyotes, minks, and all sorts of birds.

I consider the parks as my gym membership. It is one that we all pay for through our taxes and it is one we should take advantage of to be physically active in, particularly here in Minnesota. If you are new to running (or to running outdoors), here are a few tips I recommend: 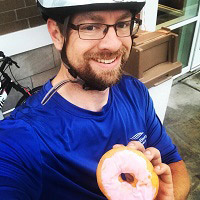 Alex McKinney is the Recreation Supervisor of Three Rivers Park District. As the supervisor for the Outdoor Recreation School, he works to introduce people to new opportunities on public lands through a variety of outdoor skills. Through his work at Three Rivers, he has directed 5Ks, 10Ks, ultra-marathons, mountain bike races, and cross-country ski races over the past 14 years. He is an active biker, runner, and cross-country skier.

A Beginner's Guide to Trail Running

Tired of running on pavement or treadmills? Love being in nature? Give trail running a try! Learn how to get started, where to go and what to expect. For an extra challenge, sign up for the Allina Health Trail Mix Race on April 13.

It's that time of year: time for New Year's resolutions. Start off feeling fit and free with 11 ways to stay active year-round.

Fall is the perfect time for hiking, and Three Rivers has endless options. From half-mile walks with lake views to more challenging hikes through maple forests, read on to see our staff picks for best fall hikes.