Reintroducing Trumpeter Swans: What It Took to Succeed

Trumpeter swans once nested throughout Minnesota, but were eliminated by early settlers who hunted them for feathers and food. The idea of restoring trumpeter swans to their native range in North America came about through a suggestion in the early 1960s made by Bob Burwell, U. S. Fish and Wildlife Service Regional Director in Minneapolis/St. Paul.

At that time, Bob suggested to Fred E. King, Chairman of Hennepin County Park Reserve Board of Commissioners, that restoration of trumpeter swans would help increase the visibility of the District's parks. Wildlife managers agreed that establishment of a separate population would help make the species less vulnerable.

So Hennepin County Park Reserve District (now Three Rivers Park District), began its efforts to reestablish the trumpeter swan as a breeding species in Minnesota in 1966 through the initiative of Commissioner King. 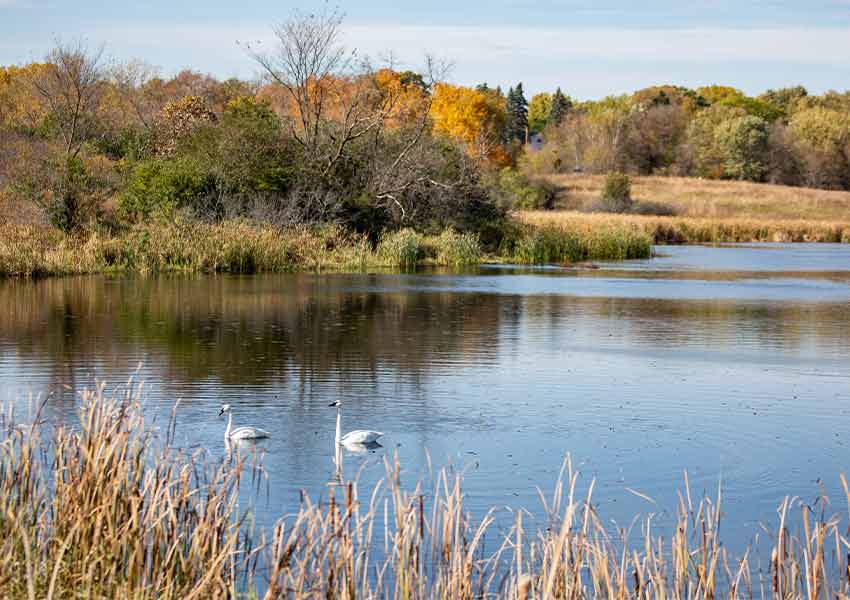 Thoughts of restoration became a reality when the Park District received one pair of adult swans from Red Rock Lakes National Wildlife Refuge in Montana to be released in lakes and wetlands of Carver Park Reserve. Over the next few years, an additional 40 sub-adult trumpeters (swans that are 1-3 years old that have not reached breeding age) were received from the refuge.

Unfortunately, initial efforts to bring back the trumpeter swan were not very successful. Some birds were shot, others died from disease and injury, and a few were even stolen.

By 1973, the flock had diminished to 13. The program was changed at this time to emphasize captive breeding to rebuild the flock. Four cygnets (young swans) were hand-reared that first year.

Over the next few years, cygnets were raised by hand and by adult swans. Young trumpeters were kept clipped within fenced refuge areas until they were of breeding age (2-3 years).

In addition, 1979 was also the first time since the early years of the program that trumpeters were allowed to fly free and eight swans were released.

Unfortunately, the next year was a disaster for the program.

Five pairs nested in 1980, but only nine cygnets reached flight stage. Nineteen swans were allowed to fly free, but nine of them were shot, including two nesting pairs. Eleven additional swans died from various causes throughout the year. Flock size decreased from 41 to 34, including eight free flyers.

Managing Swans in the 1980s 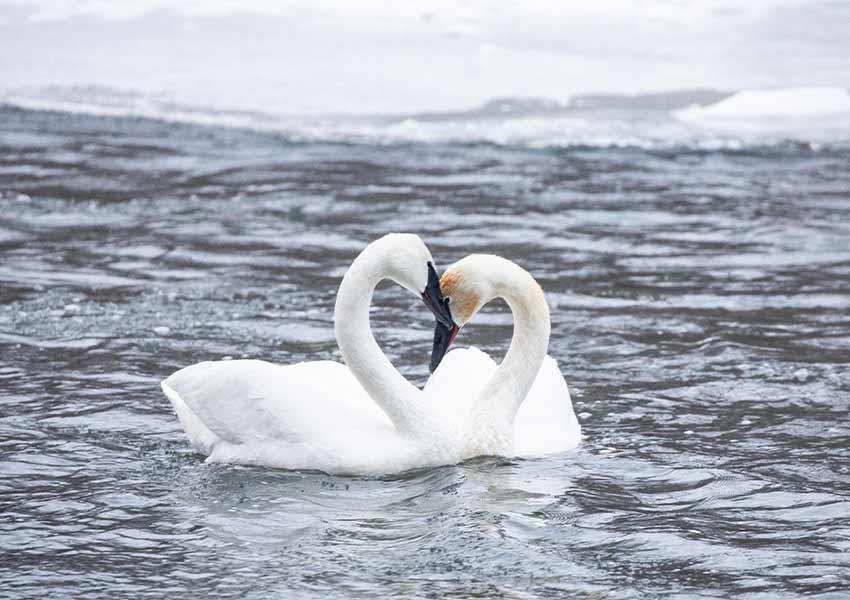 Flock management in the 1980s consisted of maintenance of a few captive breeding pairs; release of their offspring at two years of age; maintenance of winter refuges for both captive and free-flying birds; and monitoring of the free-flying flock.

Offspring of flighted pairs were allowed to fly free with the adults in the fall. Each year the percentage of the flock that was flighted increased. Twenty-nine trumpeters migrated south at the end of 1984 (the total population was 84; 43 of which could fly).

This represented a major step in restoring a free-flying, self-sustaining population of trumpeters. Reports of Park District swans came from Iowa, Missouri, Nebraska, Kansas and Oklahoma. Of the 29 birds that left in December 1984, 18 could be accounted for in the spring of 1985. The others were presumed to be dead.

Free-flying pairs began ranging further and further from the Park District in 1985. A pair was seen throughout the summer around Grand Rapids, 150 miles north of their natal site. One pair nested near St. Cloud and another pair spent the summer at Carlos Avery Wildlife Management Area, near Forest Lake. Two swans spent the summer near Gordon, Wisconsin.

The Park District hoped to restore a free-flying flock of 100 trumpeters with at least 15 nesting pairs to Central Minnesota. High mortality suffered by the free flyers continued to plague the Park District's efforts. Sub-adults disappeared during the summer, probably due to lead poisoning; older birds died in the fall and winter.

Birds of all ages died of lead poisoning and shooting and young birds succumbed to accidents and disease. Progress toward the goal of 100 free flyers had been slow in the ‘80s and the Park District initiated an extensive public education program about not shooting swans and the danger of lead shot in wetlands.

Coordinating Efforts with Other Agencies

In the mid-1980s, the Park District and the Minnesota Department of Natural Resources (DNR) Nongame Wildlife Program started working together to the benefit of both programs.

The Park District's flock has gained greater visibility and protection because of the DNR's statewide publicity campaign. The flock also got a genetic boost when the DNR traded four Alaska birds for four the Park District's origin birds.

In return, the Park District has provided expertise to the DNR program since its restoration idea became a plan. The Minnesota DNR program was working toward a similar sized trumpeter swan flock in west central Minnesota and swan releases in the Detroit Lakes area, which began in 1987, have already resulted in some mixing of the two flocks.

Momentum was gathering for a Mississippi Flyway flock of trumpeter swans and in 1989, the Wisconsin DNR began its releases in western Wisconsin. The cooperative efforts of three agencies and the large number of birds being released should spell success for trumpeters in this region.

The growth of the population reduced the need for the Park District to maintain captive birds and refuges. In the fall of 2010, the Park District sent its last four captive trumpeter swans to the Iowa DNR swan breeding program.

Free-flying trumpeters now have filled available territories in all of our Park Reserves. Trumpeter swans are a common sight now throughout the Park District and neighboring wetlands. 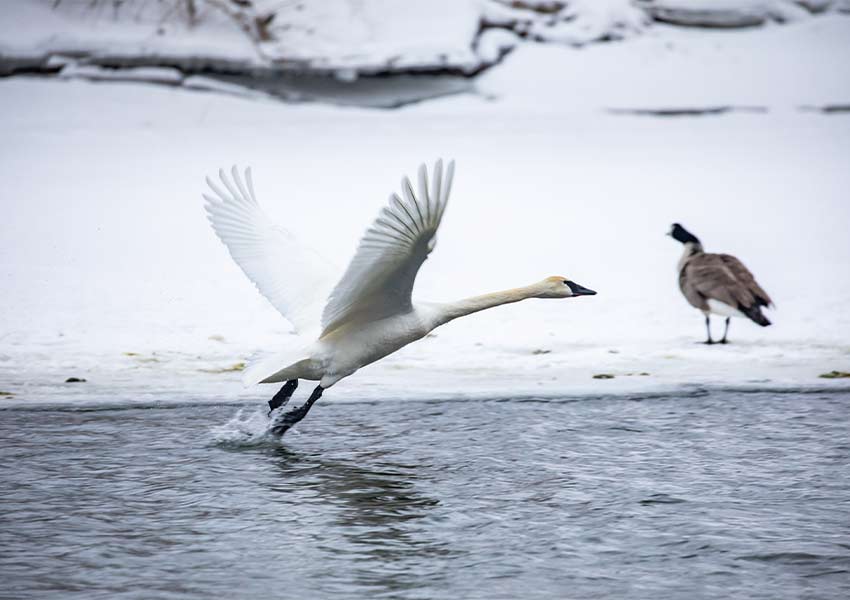 In 1982, the DNR Nongame Wildlife Program published a plan for restoring trumpeter swans. The project started when they collected 50 eggs in June 1986 on wetlands west of Fairbanks, Alaska.

For egg collecting, U.S. Fish and Wildlife Service Pilot Rodney King assisted in the visit of 16 nests to collect the 50 eggs. The eggs were brought to Carlos Avery Wildlife Management Area and placed in incubators. This trip was repeated three more times over the next three years.

When it comes to swan restoration, an important question asked is: At what age do we release the swans?

Because natural mortality is typically high in a trumpeter's first year, the DNR decided to hold them in captivity until 23 months of age. And because trumpeter swans normally select a mate in their third year and begin nesting in their fourth year, this release age would give the swans a year to become familiar with their release area before they reached breeding age.

In 1987, after five years of planning, egg collecting and cygnet rearing, the DNR began the most important part of our project — releasing swans in their new "homes."

They had gathered swans for their first major swan release with 21 juveniles from the Minnesota Zoo, the Brookfield Zoo in Chicago and Three Rivers Park District. The swans had their wings clipped so they could not fly away when released in spring. New flight feathers would grow back in late summer. Trumpeter swans imprint on the first place that they fly from, so to them Minnesota would be home.

Tamarac National Wildlife Refuge near Detroit Lakes was chosen for the release of the 21 swans.

Trumpeter swans can be found nesting throughout the state and the current estimate for trumpeter swan populations in Minnesota is in excess of 25,000 birds. The five-year National Trumpeter Swan Survey that was scheduled for this year has been postponed due to the COVID-19 pandemic.

Within the Park District, there are nesting swans in all of the Park Reserves and you can find locations of nesting sites here. Swans also regularly nest at other lakes and wetlands throughout Hennepin County and the metro region. 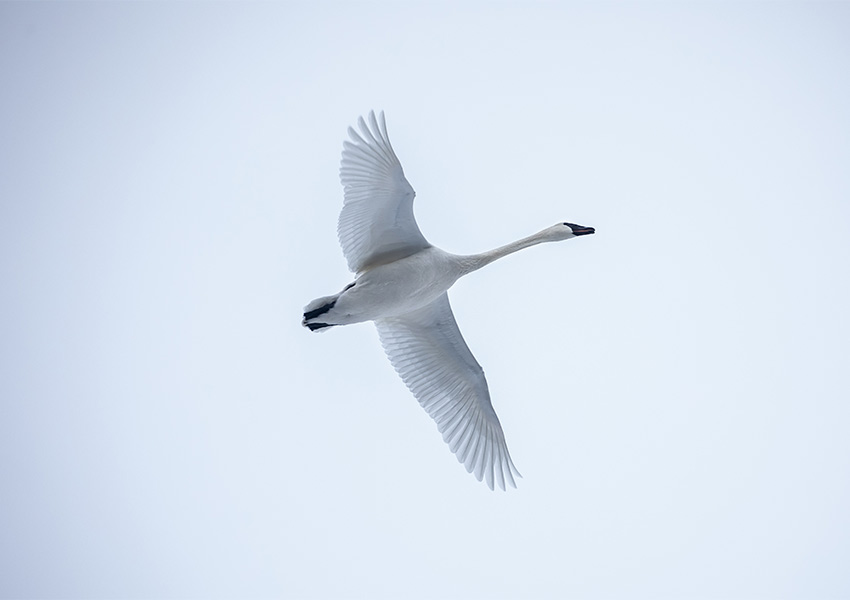 Trumpeter swans currently breed throughout most of the western Great Lakes region. However, beyond estimates of population size and trends and distribution, there is relatively little recent information about their ecology and migration.

These transmitters record high-resolution, high frequency locations and related data through cellular phone networks that will allow us to:

Results of this study will inform current and future IP trumpeter swan conservation by providing basic information about migration, year-round movements, mortality risks and use of agricultural and other landscapes.

As part of this project, location data will be archived and made available to the public via this website which summarizes trumpeter swan movements and habitat use. Thus, the project will also offer the opportunity to actively engage and inform the general public about how their past investment in conservation made a positive difference to the region's natural heritage today.

Three Rivers Park District is a partner on this project and we currently have one bird from Baker Park Reserve in the study. You can follow the birds from the website above. The Park District is planning to have two or three additional birds collared in the summer of 2020.

More About Commissioner King and The Trumpeter Swan Society

Fred King, a banker by trade, an avid waterfowl hunter and avid conservationist, was the force behind the founding of The Trumpeter Swan Society (TTSS) in 1968 and the restoration of Trumpeter Swans in Minnesota. King attributes formation of TTSS to his colleague Al Hochbaum, director of the Delta Waterfowl Research Station in Manitoba, Canada.

At a meeting in Carver Park Reserve at the time of this historic restoration effort, Hochbaum suggested forming a group of professionals to assure the vitality and welfare of wild trumpeter swans. His suggestion received enthusiastic support of the others in attendance and before the meeting was over, The Trumpeter Swan Society was founded.

Fred King served as the society's first president. Other founders, in addition to Fred King and Al Hochbaum, were Peter Ward of Delta Waterfowl Research Station, C. R. "Pink" Gutermuth of the Wildlife Management Institute, and Don Cochran, Cliff French and Robley Hunt, all staff of the Park District.

Park District staff have been actively involved in TTSS from the beginning and TTSS headquarters is still housed with our Natural Resources Management offices.

TTSS now advocates for swans around the world. For more information about trumpeter swan conservation and ecology, visit https://trumpeterswan.netlify.app/index.html.

Interested in learning even more about the history of reintroducing trumpeter swans in the parks? Tune into these episodes of The Wandering Naturalist podcast and discover more about these special birds.