In the early 1950s, little was known about the winter whereabouts of a charismatic orange and black butterfly known as the monarch. Soon, scientists discovered that monarchs from the west and east coast overwintered at roosting sites along their respective coasts. Where monarchs from the central United States and Canada went was still a mystery, though.

HOW IT ALL BEGAN

A biology student named Fred Urquhart had been intrigued by insects since he was a boy. While studying entomology at the University of Toronto, he became fascinated by the monarch.

In the late 1930s, he became a professor at his alma mater and dedicated his research to unearthing the migratory route of the central North American monarch.

Dr. Urquhart explored areas with known overwintering populations looking for clues. He investigated reports of monarchs in south Texas, but it was unclear where these butterflies came from.

What did work was a tiny paper dot with price tag adhesive connected to the hindwing of a monarch.

Urquhart built a network of researchers, naturalists, and observers across North America and Mexico. Observers in central Mexico had sightings of monarchs, but no tagged monarchs had been found yet and the full scope of the migration was still unknown.

A CONNECTION TO LOWRY NATURE CENTER

In the 1970s, a Minnesota naturalist was developing a burgeoning curiosity about monarchs. Jim Gilbert was working as a naturalist for Lowry Nature Center, Minnesota Landscape Arboretum, and Hopkins School District.

He was intrigued by Urquhart’s research, particularly the monarch tagging program. Gilbert had lots of experience with this insect and figured he and his students could significantly contribute.

Mr. Gilbert wrote to Urquhart asking to participate, but his request was initially denied. Citizen science is by no means a new concept today, but it was in its infancy in the 1970s. Dr. Urquhart was concerned about the quality of the information Gilbert could submit.

Thankfully, Gilbert was persistent. He wrote a second request detailing his years of research experience and Urquhart agreed to train him in tagging monarchs.

TAGGING IN THE TWIN CITIES BEGINS 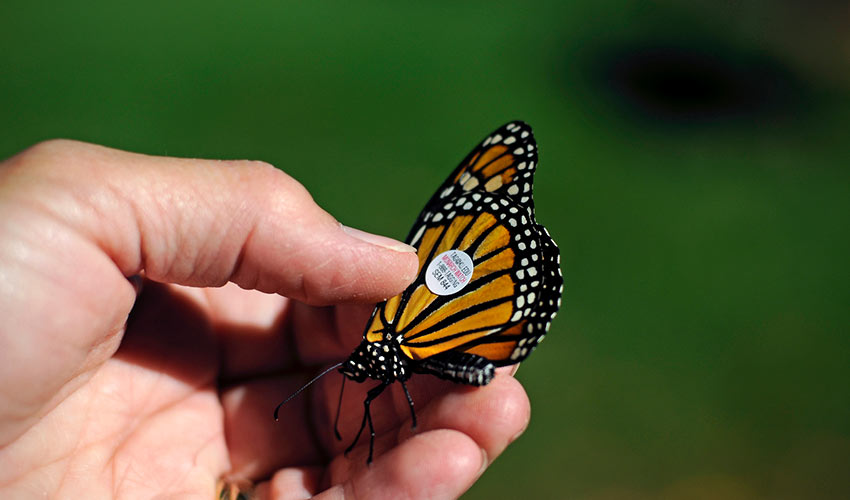 Gilbert received tags and began tagging. While leading students in insect study, they tagged monarchs whenever they could. Catch-and-release occurred at the Hopkins School District, Lowry Nature Center and Carver Park Reserve, and the Minnesota Landscape Arboretum.

On September 6, 1975, a school group visited Gilbert just down the road from Carver Park Reserve at the Minnesota Landscape Arboretum. Gilbert recorded roughly 100 monarchs that were tagged during an insect survey that day.

One of those monarchs was about to make a very long journey.

Dr. Urquhart retired from his university tenure in the mid-1970s. But he remained dedicated to monarch research, still searching for the migratory destination of central North American monarchs.

Urquhart was in contact with Kenneth Brugger, a naturalist living in Mexico. Brugger was eager to contribute by searching far and wide for the monarch’s wintering whereabouts.

In late 1975, Brugger spotted millions of monarchs at high elevations while crossing Mexico’s Sierra Madre mountain range. He excitedly called Urquhart and shared what he saw on the few isolated mountain peaks 10,000 feet above sea level.

In January 1976, an ailing Dr. Urquhart made a visit to central Mexico. The trip’s goal was to meet with Brugger and observe monarchs in the Sierra Madre. Urquhart hoped to confirm this as the overwintering site.

Urquhart and his wife trekked up a 10,000-foot mountain to observe the monarchs firsthand.

And while viewing millions of butterflies, they found one with a tag.

The tag read PS 397, which was placed by naturalist Jim Gilbert and one of his students at the Minnesota Landscape Arboretum on that September day in 1975.

From Minnesota to the mountains of central Mexico 2,000 miles away, Urquhart was elated to finally uncover proof of the vast migration made by the monarch butterfly.

Imagine if Urquhart hadn’t continued his research. Or if he hadn’t developed that network of observers and experts in Mexico. Or if Jim Gilbert had not persisted in becoming a citizen science contributor.

Subtle factors, persistence and people working across borders all came together to finally reveal the mystery of the monarch. And thanks to the tag placed by Jim Gilbert’s student on that September day, Minnesota occupies an important place in the history of monarch research.

HOW YOU CAN GET INVOLVED

Today, contributions from people like you allow us to make progress in understanding how nature works and to help protect these special butterflies.

Check out this blog post from last July to learn more about the monarch butterfly. Participate in an upcoming monarch tagging program to continue the important research started by Urquhart. Use smartphone apps like iNaturalist to document what you find when exploring outdoors. Volunteer to survey the diversity of animals (including monarchs), collect seeds to help with prairie restorations, help with invasive species removals, and more.

Simply learning, appreciating, and sharing makes all the difference in the world.

In 2019, Lowry Nature Center celebrates 50 years. Watch for special events throughout the year, plus additional blog posts on the legacy from the past 50 years and dreams for the next 50! 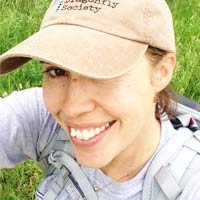 Laurel Sundberg is an Interpretive Naturalist at Lowry Nature Center. She has 17 years of experience in natural history, outdoor recreation and experiential education. She is currently working on research projects about pollinators and dragonflies. Outside of work, Laurel is a stand-up paddleboard and Nordic ski enthusiast and can frequently be found hauling an easel around to oil paint landscapes.