Managing Invasive Species That Are Here To Stay

While we wish we could snap our fingers and make invasive plants disappear, some common, widespread invasive species like garlic mustard and common buckthorn are here to stay. Invasive plants are non-native to Minnesota, cause economic or human harm and outcompete native plants. Common buckthorn and garlic mustard are widespread, and to completely eradicate these two species from Three Rivers would require countless staff and volunteers working only on removing these plants.

In invasive species management, the most important mantra is “Early Detection, Rapid Response.” In simple terms, this means finding an invasive plant population early and taking care of it quickly before it gets out of control.

While catching an invasive plant early sounds difficult to do, there are many examples of success stories in Minnesota. Last summer the invasive plant in the news was rough potato, a vining milkweed spreading along the Lake Wobegon Trail in Stearns County that hadn’t been recorded in the United States since 1958.

Originally found by a University of Minnesota Master Naturalist volunteer, individuals from the Minnesota Department of Agriculture responded quickly to the report. The seed pods were collected and destroyed before the plant could spread. This is early detection, rapid response in action!

At Three Rivers, the Rapid Response Early Detection team of volunteers is dedicated to locating new populations of target invasive plants and are extra eyes in the parks.

The goal for any invasive species after it is detected is eradication. The Invasion Curve is a graphical representation that shows how it is easier and more cost effective to eradicate an invasive species if you detect and control it soon after it’s introduced.

If an invasive species isn’t detected or controlled early, it will grow exponentially quickly, becoming a huge problem. Once the species reaches a certain threshold where it is too late to eradicate, containment or long-term management are the best options.

How Do You Control The Worst Invasives?

So what can we do about garlic mustard and buckthorn? Unfortunately, we are in the “long-term management” scenario on the Invasion Curve, but there are still many high-quality woodlands where buckthorn and garlic mustard have not taken hold. Our goal is to protect these sites.

One way we accomplish this goal in Three Rivers Park District is through the Adopt-A-Woodlot volunteer program. Through this program, a group or individual volunteer commits to removing buckthorn and garlic mustard for two years within a designated woodlot.

Our staff provide volunteers with training on buckthorn and garlic mustard identification and removal. We also provide support from Conservation Corps crews to remove large buckthorn that can’t be removed with hand tools. Adopt-A-Woodlot volunteers provide vital invasive species management in high-quality areas of our parks

How Can You Stop The Spread

One simple action you can take to prevent the spread of invasive species is to remove any seeds and mud from your boots, gear or pets every time you recreate outdoors. Boot brushes are a great way to clean mud from the treads of your hiking boots onsite. Tiny garlic mustard seeds are often spread unintentionally on muddy boots. For more information, check out Clean Play Go campaign.

Invasive species management involves careful consideration of resources and time. Through early detection, rapid response and other tools we will hopefully prevent any future buckthorn or garlic mustard-like species from getting out of hand. 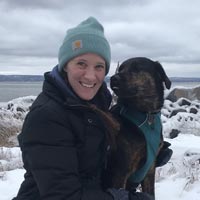 Emily Dunlap is the Invasive Species Coordinator at Three Rivers Park District. She holds an environmental studies degree and has worked in natural resources management in the Twin Cities since 2012. When she’s not scouting for invasive plants, she enjoys hiking with her adventure dog, Phoebe, and traveling all over the world with her husband to experience new cultures and see unique wildlife. One of her favorite trips to date was a bird watching tour in the Andes Mountains of Colombia.

Around the Twin Cities, there is a woody vine that looks similar to one of our native vines — but is highly invasive. Read on to learn why oriental bittersweet is a problem, how to distinguish it from American bittersweet and what you can do to help.