Canada geese are a common sight in Three Rivers Park District and throughout the Twin Cities. In fact, some people feel they are too common and should be removed. This has not always been the case.

Before the 1970s, Canada geese were rare in our area and only seen during migration. Habitat loss and over-hunting in the early 1900s eliminated geese from much of Minnesota.

How did we go from no geese to so many?

Canada geese were bred and reintroduced to the wild on a small scale in different parts of Minnesota starting in the 1950s. Captive geese were brought from game farms and raised with the hope that they would establish a resident population. Because these attempts were small and isolated, they never produced enough geese to form a widespread population.

Three Rivers was part of this era. When we acquired Carver Park Reserve, there was a small flock of Canada geese on the property. Robley Hunt, the first Forestry and Wildlife manager at Three Rivers, took over the management of the flock, and it slowly grew.

In the early 1970s, a group of contributors from the some of the bigger names in Minnesota – including the Bells, Crosbys, Pillsburys and Hills – worked with University of Minnesota Professor Jim Cooper to develop a plan to establish Canada geese in the metro.

They worked with a number of groups, including Three Rivers Park District, Wood Lake Nature Center, General Mills, Belwin, US Fish and Wildlife Service, the Minnesota Department of Natural Resources, and North Oaks Spring Farm, to establish and monitor geese.

By the early 1970s Three Rivers had pens in most of the parks to raise and release geese. We banded hundreds of geese in order to study their movement.

The Canada goose populations in the Twin Cities grew rapidly in the late 1970s and early 1980s. No one expected geese to adapt so well to the expansive lawns in our parks and cities.

By the mid-1980s geese had increased to the point of needing to be controlled. Professor Jim Cooper started doing goose roundups at the Minneapolis Chain of Lakes with a team of university students.

At the start, captured geese were sent to other parts of Minnesota and other states to help increase their goose populations. Jim ran this program for many years, catching and relocating thousands of birds.

After a while, however, other states started to have goose problems of their own. As release sites became more difficult to find, the DNR and USFWS issued permits to capture and send geese to be processed, as long as the goose meat went to food shelves.

Goose populations in the Twin Cities have since stabilized, and goose roundups are now less frequent. At Three Rivers we used to round up geese at four or five sites each year, but now we only do one or two per year.

Goose roundups are mainly done in areas where goose droppings effect the water quality at swimming beaches, damage the turf on golf courses or impact picnic areas. We also use noise makers, lasers and dogs to discourage geese from spending time in these areas. 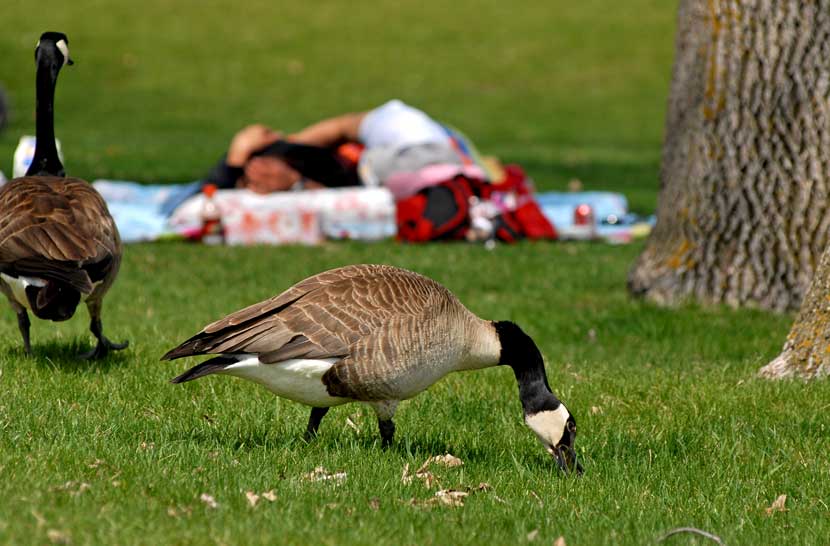 In addition to keeping geese out of high-use areas, we use a few other tools to keep our goose population in check, including egg addling and special hunts.

Egg addling is also called egg oiling. In this process, we coat goose eggs with corn oil, which prevents the eggs from hatching. This is a technique supported by animal rights groups. It can only be used in select areas where nests are limited to small areas, like islands.

Goose hunting is another technique for controlling geese. In Three Rivers we have limited areas where hunting is allowed and fall geese are a problem. For a number of years we held special hunts at Baker Park Reserve and Cleary Lake Golf Course. Fall goose numbers at these sites have decreased enough that we have not had to hold hunts for several years.

The Future of Canada Geese and How You Can Help 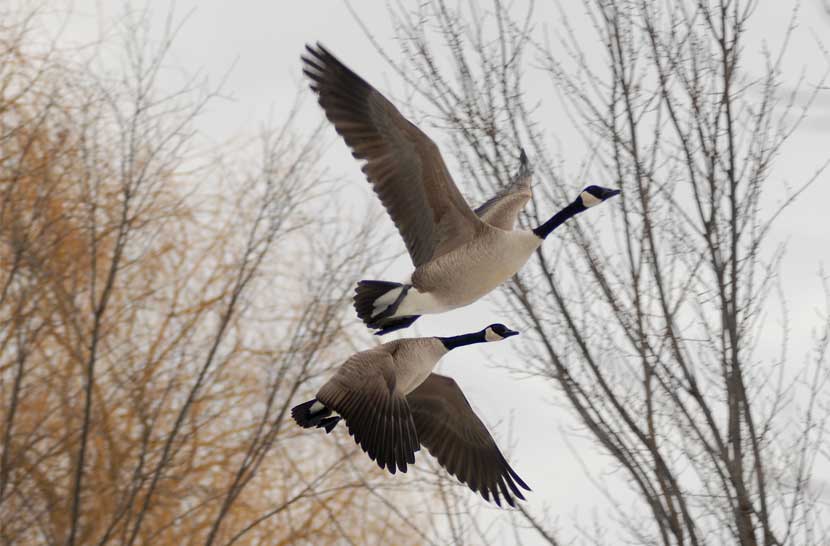 Canada Geese are here to stay, which is a good thing. They are majestic birds that still grab my attention when they fly overhead. There are several things we at Three Rivers and you can do to make sure that people and geese can successfully share the lakes and wetlands in our parks:

Reintroducing Trumpeter Swans: What It Took to Succeed

Trumpeter swans once nested throughout Minnesota, but were eliminated by early settlers who hunted them for feathers and food. Learn what it took to restore their populations and explore current efforts in managing trumpeters today.