To put it simply, migration is the movement of animals between breeding and wintering grounds. Birds time their migration based on day length and availability of food. Each species may take specific strategies to navigate their journey, but in general all use the sun, stars, the earth’s magnetic field and mental maps.

Migration is a topic that has caused more than a few head scratches – and taking a global look at it can be very complex. For that reason, I will concentrate this post on birds within Minnesota, and specifically those you can find in Three Rivers Park District.

August to September: Ospreys and Other Hawks

Hawks typically begin migrating as early as late August and early September. This includes a raptor that is frequently seen nesting in Three Rivers parks: the osprey.

By Labor Day, ospreys are typically gone from their nesting locations and on their way south, headed as far away as Central and South America. We expect them to return to our parks around tax season next spring.

Ospreys travel independently of each other – not as a family unit. Adults have been found to take direct routes, while young ospreys tend to take their time. Unfortunately, some get lost at sea along the way. This makes you really appreciate migration and the challenges and costs that it presents.

Ospreys aside, it’s difficult to recommend specific sites within Three Rivers where you can reliably view migrating raptors, but Carver Park Reserve would be a good place to start.

Outside of Three Rivers, I cannot discuss migrating raptors without mentioning Hawk Ridge, which is owned and operated by the City of Duluth. If you are interested in seeing thousands upon thousands of broad-winged hawks fly by, plan a visit in September.

Later-migrating hawks include saw-whet owls. These birds come through our area throughout October. Through research being conducted in Three Rivers parks by the North Central Bird Observatory (NCBO), we have documented large numbers of these small migrating owls in Carver Park Reserve. The number caught and banded each year by NCBO has ranged from 59 to well over one hundred. Before these nighttime banding efforts, saw-whet owls were seldom documented. 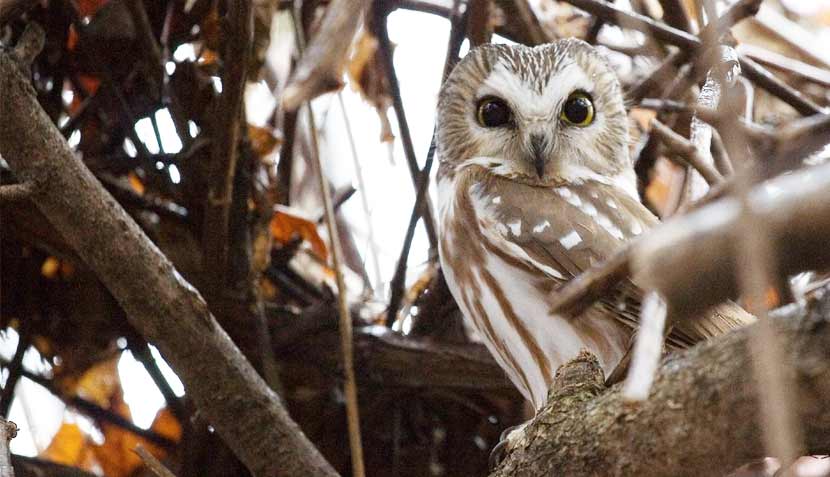 Songbirds are not typically a main attraction in the fall because singing, breeding males make the spring migration so much more fun. However, songbirds can still be found moving through the parks throughout fall – usually in large groups.

On good days, the woods and prairies can be found literally teeming with birds passing through to feed. Songbirds need to time their migration closely with food sources. Warblers begin their migration early so they don’t get caught without a healthy supply of insects to feed on.

September to November: Ducks and Swans

Waterfowl are fun to watch in both the spring and fall. Large numbers of ducks fly together as family units, and flocks sometimes number into the thousands. When this many waterfowl are grouped together, it can be challenging (but fun!) to identify these birds.

In the fall, bigger lakes are good places to see large numbers of ducks as they feed and wait for the proper weather conditions to migrate. In Three Rivers, try Lake Rebecca and Kasma Marsh in Lake Rebecca Park Reserve, Medicine Lake from French Regional Park, Murphy Lake in Murphy-Hanrehan Park Reserve, and Prairie Lake in Crow-Hassan Park Reserve.

The University of Minnesota is conducting research to monitor their migration patterns using solar-powered telemetry backpack transmitters. Three Rivers is a partner in this research, which is funded by the Environmental Trust Fund.

For late-migrating waterfowl, tundra swans are a highlight. However, you may hear them before you see them. They move through this area in early November, and you can hear their unmistakable whistle as they fly high above the clouds. These birds remind me that winter is only a short time away. They have been seen in all Three Rivers park reserves.

With the beginning of winter comes the seed-eating time for birds. Hungry, they are willing participants at feeders, and this time of year is the primary bird feeding season.

Some birds such as black-capped chickadees don’t migrate. How amazing is it that such a small bird can be found in our woods all winter long and on the coldest of days still be singing its tune?

The coming of winter also brings our winter residents like dark-eyed juncos, which migrate from northern Canada and become commonplace at the bird feeders in our area.

Eastman, Lowry and Richardson nature centers all have indoor bird feeder viewing areas. Grab a seat and see who stops by.

If you are interested in following birds and their migrations, a great place to start is the Minnesota Ornithologists Union (MOU). Sign up to receive emails with information from birders around the state documenting migrations and unusual instances.

Ready to go birding in Three Rivers? See complete information on when and where you can find birds in the park district on the Three Rivers bird checklist.

Steven Hogg is the Wildlife Supervisor at Three Rivers Park District and has been working for the Park District for 13 years. After graduating from the University of Alberta with a degree in Environmental and Conservation Biology, he moved to Minnesota to marry his beautiful Minnesota bride. Steven has always had a passion and dedication for wildlife, even when he was young. This passion is what lead him into a career where he strives for the proper orchestration of research, management, and politics to ensure natural resources and wildlife are given a voice. In his spare time, which there is little of with his three kids, Steven likes to farm, hunt, and fish.

Parks for the Best Fall Colors

Fall is a gorgeous time to explore the parks. Get out and enjoy the season at a park near you.