Adapted Biking: Bringing All Together on the Trails

This article originally appeared in the August 2021 issue of Silent Sports Magazine with the title "Removing Labels By Bringing All Together on Silent Sports Trails."

Mountain bike enthusiasts can’t resist plowing through the dirt trails at Elm Creek Park Reserve. The packed trailhead parking lot in Champlin, Minnesota, proves that this is a sport for outdoor-loving adventure-seekers.

Steve Laux and his wife, Chau, live in Maple Grove with their three young daughters. Steve, 44, works as a marketing professional for Medtronic and is also a volunteer for and president of the Minnesota Spinal Cord Injury Association. Laux lives with quadriplegia after sustaining a spinal cord injury. “I used to mountain bike prior to my injury more than twenty years ago,” he said. “I’ve done a lot of sports since then, including road biking, downhill skiing, water skiing and even sky diving, but this was my first time on an adapted mountain bike.”

Three Rivers Park District currently owns five adapted mountain bikes in its fleet. When purchasing equipment for the program, staff try to obtain a wide variety of not only the different types of adapted mountain bikes currently on the market, but also accessories like kidney belts, straps, a variety of seating and padding options, quad grips to help individuals who have difficulty holding the pedals, and battery-powered electronic assist for those who might need a little bit of extra pedal power.

Steve rode the park district’s adapted electronic assist bike, and said, “It definitely met my expectations in terms of getting set up and going. As with most adapted sports, you learn to be patient and really work to get the right setup for yourself. I was absolutely blown away by the electric assist and the full electric features on this bike!  It took me a while to get comfortable, and I stayed on the nice, paved path initially, but once I figured out the button and steering, I could not resist hitting the singletrack with my girls. I wasn’t as fast as they were, but it was a blast being able to do a new activity with them. Their smiles were almost as big as mine.”

Elm Creek Park Reserve encompasses 4,900 acres, the largest of all of the Three Rivers Parks. It includes options for almost any outdoor activity during both the winter and summer months. Hiking, biking, swimming, Nordic and downhill skiing, birdwatching, and the Eastman Nature Center are all available for people who visit the park. Steve remarked, “I’ve enjoyed taking my family to the parks for years. I’ve also enjoyed watching the adapted recreation program grow. I’m just immensely thankful that Three Rivers advocates for adapted recreation options and provides the full services that they do. I’d recommend them to newcomers or veteran riders. My family even wants to volunteer at future events because our experience was so much fun.”

Darryl Smith, also an Adapted Mountain Bike Program participant, said, “I signed up because it sounded interesting. I learned about it while participating in the Three Rivers Adapted Nordic Ski Program. The staff and volunteers recommended that I give it a try.”

Darryl is involved with the adapted kayaking program as well. He chose to ride one of the handcycle road bikes that was offered by one of Three Rivers’ partner organizations, Courage Kenny. Darryl, pictured at the top of this post, stuck to the many miles of paved trails that Elm Creek offers. “I really like that one can choose different levels of difficulty with the trails,” he said, “and it is all really beautiful.” Darryl, a 74-year old, bilateral-above-the-knee amputee, in August 1969, was injured by an incoming mortar round while serving in a Marine Corps rifle company in Vietnam. He was awarded a Purple Heart and Bronze Star with “V” medals (an award honoring an act of valor).

As one of the program’s most involved participants, Darryl said that being able to bike with his friends and family is very important to him. “Three Rivers is pretty much the only adapted program that I have participated in,” he said. “I certainly agree that having friends and family along is extremely important, and it makes the program really work. The staff is also really helpful, and the terrain is great.”

Staff member Rachael Sarette, from Coon Rapids, MN, has been assigned to several of the park district’s programs since she began seven months ago. She said, “I’ve worked adapted programs for different organizations, and I love that Three Rivers just seems to get it. The programs are well thought out, well-funded, and set up for success so that, on the day of the event, everyone can just focus on enjoying the experience.” Rachael said she believes what sets Three Rivers’ adapted programs apart from others is that staff actively work to build community through these gatherings, instead of just teaching outdoor recreation skills. “I see the outdoors as a vehicle for more important things in life like confidence, stress-relief, and friendships, so I love that these programs are working toward those larger life goals.”

Rachael spent time riding with and getting to know program participant Annie Hickman, from Crystal, MN. Living with a progressive neurological condition, Annie said, “Doing these kinds of activities helps me to be more okay with what is happening [with my body], since there are still options to stay active and to learn new things.” She also mentioned that even though she has only ridden the bike once, the experience inspired her to sign up for this summer’s Adapted Mountain Bike Club because this is a sport that gets her excited. “It was easier than I thought it would be,” she said. “I wasn’t sure about using a handcycle, but it turned out great!  The way it was set up as far as the seat and using a grip cuff and straps really helped me feel stable, so I could just concentrate on enjoying the ride!”

Annie said that although she really enjoyed riding, she still faced challenges along the way. She really appreciated that Rachael was there to help give a needed push on slopes, or give her a boost to get started again after stopping. She also said she felt unstable a few times while riding on a couple of the areas of the trail and that Rachael was there to help guide and reassure her.

In kind, Rachael said, “Annie was fun to ride with because she was super enthusiastic and ready to take on any challenge. Even though she had never ridden before, we were able to ride the entire beginner loop with the large uphill and the rolling hills. We were also able to connect on a personal level, as we both talked about our teaching experiences.”

One of Rachael’s favorite aspects of the Three Rivers adapted programs is being able to see participants at multiple programs, which allows the building of strong relationships and repertoire.

Three Rivers strives to create an inclusive atmosphere for all of its park guests. During winter months, Three Rivers offers adapted ice fishing, mountain biking, and Nordic skiing. Spring and summer activities include maple syruping, archery, geocaching, mountain biking, kayaking, orienteering, team building, survival skills, and canoeing. The Outdoor Recreation staff at Three Rivers Park District pride themselves on their ability to adapt almost any of the program offerings with enough notice and time to prepare. Program modifications sometimes include adding additional staff and volunteers, changing meet-up locations or adjusting the program’s itinerary to meet the needs of all participants. Additionally, adapted equipment can sometimes be rented to participants for personal use during non-program times on a case-by-case basis. The Three Rivers adapted programs are customized to fit the needs of individual participants. They are also unique in that individuals with disabilities have the ability, and are encouraged, to participate in programs with their friends and family members.

For more information on the outdoor programs that Three Rivers offers, check out our Outdoor Recreation School. 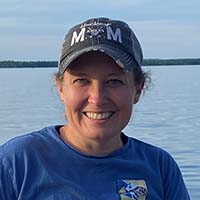 Tracy Tabaka, as an outdoor enthusiast and wheelchair-user, is passionate about creating nature-based opportunities for people of all abilities. Tracy is a staff member of Three Rivers Park District’s Outdoor Recreation School. In her free time, she loves camping, biking and traveling the country with her husband, two children, dog and cat. Yes, the cat travels well.

At Three Rivers, we get so excited for #30daysofbiking in April, but we know not everyone feels comfortable on bikes and trails. Learn how we're working with the community to address inequities in biking.

What Does it Take to Build a Mountain Bike Trail?

A new singletrack trail in Three Rivers is currently under construction at Carver Park Reserve. Learn more about the history of mountain bike trails in the parks and what it takes to develop and build them.

One Three Rivers enthusiast challenged herself to ride 140 miles in three days between all seven of the Three Rivers park reserves. Read all about why she did it, how it went and how it felt to complete this journey.